One of my readers has a cat whose desire to be King of the Hallway is driving her crazy!  Here’s what noted veterinary behaviorist Nick Dodman has to say about it: 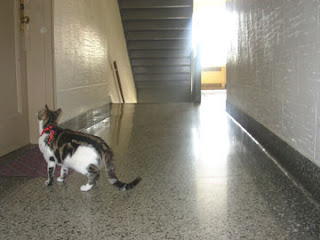 QUESTION: I have a 14-month-old ragdoll who constantly wants to go into the hallway of my apartment building to the point that he is driving me “crazy”.  He will sit by the front door and cry and cry and cry, put his paw on the doorknob, and literally beg me to open it.  Once I take him for a walk, the first thing he does is rub himself all over the carpet then strolls the hallway as if he were King.  I tried putting a harness on him so I can take him outside, but he won’t allow me to.  This happens several times a day, and it really has become very annoying.  Could you please make a suggestion as to what I can do to get my “strolling” cat to want to stay inside?

ANSWER: Dear Phyllis:
There is something outside in the hallway that your ragdoll really likes or likes to do. It sounds as though he has taken over that hallway as part of his territory and likes to promenade around there and rub himself on the ground to mark it with his scent (an olfactory mark of ownership). Your mistake was opening the door in the first place and subsequently responding to his demands to revisit the hallway in question. I believe the only effective solution would be to totally ignore his requests to go out for a period of time—it may take several weeks—until he learns his demanding behavior no longer works to achieve the desired effect. You may need white noise, a closed door between you and your cat, or ear plugs (for you) in order to get through this difficult period. To help you on your mission, you could try making outside a little less attractive by, for example, neutralizing all appealing odors with a product like Zero Odor and/or making the odor of the hallway repugnant to cats by applying, say, a citrus-scented spray or plug-in. At the same time, making your apartment more user-friendly for your cat through the addition of numerous mobile toys, food puzzles, hidey holes, climbing frames, and window perches might help too.