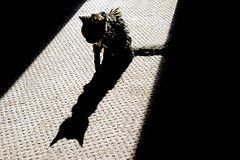 Dem ol’ Litterbox Blues.
My colleague, Alice Moon-Fanelli, chimes in on what to do when cats start avoiding their litterbox.

QUESTION:  I have 5 felines; 4 females and 1 male.  Three of the cats are older (2 females and 1 male), between 5-6 yrs of age.  The other two are young females. About 5 weeks ago, one of the young  females was spayed.  About 2 weeks ago, this female, Buttercup, began defecating and now, urinating,  on the family room and other small rugs.  The rugs have been cleaned and sprayed with anti-marking solutions and Nature's Miracle, but she continues to defecate on the spot and is not concerned about who is watching.  I live in a large home, with a large lanai which is enjoyed by all the cats.  There are 3 large litter boxes available and I use the "World’s Best Cat Litter" in them. Do I need to increase the amt of boxes?  Should I have her checked for a UTI or other illness? I am getting ready to change all the litter in all the boxes to fresh litter.  She is a beautiful, sweet little cat, but is making me crazy!  Any help/advice will be greatly appreciated. 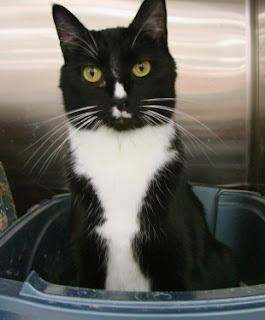 I always encourage owners who notice a seemingly abrupt behavior change in their pets to discuss their concerns with their local veterinarian to ensure there is no underlying medical cause for their pet’s new behavior.  Assuming Buttercup’s recovery from her spay went as expected and she has no other illness that would account for her recent lapse in litterbox usage, then we need to decide whether her behavior is house soiling due to a litterbox aversion and/or location/substrate preference or territorial marking as a result of environmental stress.

Even though you have 5 felines, you don’t mention any social disputes among them and my general impression is that all is fairly harmonious in your home.  You note that   Buttercup elects to defecate and now urinate on the family room rug and other small area rugs in your home.  Because the rugs are not particularly “interesting” from a scent post point of view and you report her using a consistent substrate, namely rugs, I suspect that she is house soiling (as opposed to marking) and has developed a substrate preference.  Another observation in favor of soiling versus marking is that the lapse in litterbox usage began with defecating and later expanding to include urination.  Some cats will mark with fecal material but this is far less common than urine marking.

Assuming Buttercup is house soiling because she prefers to eliminate on fabric, you need to carefully inspect your litterbox set up and make sure it is more attractive to Buttercup than your rugs.  It also helps to make your rugs unattractive elimination sites.

You have 5 felines and 3 litterboxes and you wonder if you should increase the number of boxes.    The general rule of thumb is to have one litterbox per cat plus an extra one, and to place them in low traffic, quiet areas that the cats frequent. Six litterboxes is a lot for most households! The litterboxes should also be distributed in various areas of your home, as opposed to having multiple boxes in one room.  If possible have one on each floor of the house.  Buttercup should feel that she can safely go to a box at any time, without any competition or anticipation of being pounced upon.  Try putting an open litterbox in an area that is wide open so that she can scan the area and keep better tabs on your other cats’ whereabouts.

If she is particularly fastidious and prefers rugs because she can always find a clean area, then you need to make certain she always has access to a clean box.  Some cats prefer to urinate in one box and defecate in another so increasing the number of boxes and ensuring cleanliness may be important.

Thorough and proper cleanup of all soiled areas is essential because if it smells like a latrine, it is fair game to Buttercup.  There are a variety of excellent new products on the market for cleaning urine stains and completely eliminating odor.  [ Be sure to use according to the manufacturer’s instructions for best effectiveness.]

Cats prefer litterboxes that are 1½ times the size their torso.  You did not mention placing tracking mats around the boxes or using plastic liners inside the box, but these can be an annoyance to some cats, so I advise against them.  You currently use Best Cat Litter which should be fine, but some cats have specific preferences.  Most cats prefer unscented fine granule (sand-like or even finer) clumping litter so you might wish to try a couple different brands.  I recommend having at least 4 inches of litter in the boxes, which cats also prefer so they can dig and bury their excrement easily.  Clumping litter should be scooped daily and changed completely every 2-3 weeks if not more frequently.  One product I like is Zero Odor which can be used to break down odor particles on the soiled rugs and also in the litterbox.  After scooping or cleaning the box, spray the litter with Zero Odor litter spray.  Since cats can be quite sensitive to the smell of chemicals, it is important to eliminate such odors from the box.  Avoid perfumed cleansers or strong-smelling products when washing the litterboxes; rather, use unscented soap and warm water and rinse the box thoroughly.

Once her litterboxes are set up to her liking, it is important to change the function of the soiled locations or make them aversive so her litterbox is her best option.  This will help break old habits! You may elect to pick up and temporarily store your area rugs until Buttercup’s inappropriate elimination issue is resolved. Then you only have to focus on making the family room rug a less attractive option. One strategy is to take advantage of the fact that most cats do not like to eliminate in their feeding areas.  You could try moving Buttercup’s sleeping, feeding, and play area near the family room rug.  Alternatively, you can use a citrus deodorant spray or Boundary Spray on the rug, which are available in most pet supply stores.  If you are concerned about damage to the rug, you can spray a towel with one of these products and lay the towel over the area/s most frequently soiled.  Rubber mats, nubby side up, may also deter a cat from approaching a specific area and you could use these to keep Buttercup off the couch when you aren’t around.  Another strategy for large, flat surfaces is to cover a piece of cardboard with contact paper, sticky side up and cover the area that is being soiled.  Cats do not like to walk on sticky surfaces!  Double sided sticky paper in sheets or in the form of a tape dispenser is available in many pet stores.

If moving her eating areas to the spot she is eliminating on does not deter her, then perhaps you should move a litter box to these areas.  If she expresses an interest in eliminating in a specific area no matter what, it is best to have a litterbox in this spot so she can eliminate appropriately.  I recognize that this option is not aesthetically pleasing, but in some cases the litterbox can be moved back incrementally to a location that is more appealing to you, a month or so after the elimination issue is resolved.