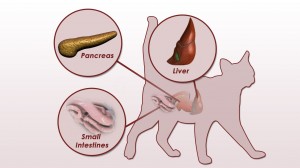 So where were we (continued from part 1)?  Right, the FT4 test.  Lo and behold, it came back elevated.  So, the cat is hyperthyroid.  The vitamin B12 and folic acid level came back normal.  If either the B12 or the folate were low, we could say with good certainty that the cat has some gastrointestinal illness.  But a normal B12 and/or folate level does not exclude gastrointestinal disease. So GI disease is still a possibility.

Two days later, ultrasound was performed on the cat, in our hospital. The ultrasonographer noted that the intestines were diffusely thickened, suggesting that the intestinal tract was infiltrated with something, most likely either inflammatory cells or cancer cells. The liver looked a little more dense than normal, and the pancreas did look a little swollen and inflamed.  The ultrasonographer believes the cat likely has inflammatory bowel disease, with secondary inflammation of the liver and pancreas.  This is the so-called “triaditis” that I described in the last post.

In order to prove this, we’ll need to do endoscopy and get biopsy specimens of the small intestine.  We’ll also need to get a biopsy of the liver, which we can obtain via ultrasound guidance, at the same time we do endoscopy.  We will not get a pancreas biopsy.  The pancreas is one organ you don’t mess around with.

Because the cat is not showing  any serious clinical signs relating to the presume inflammatory bowel disease (other than weight loss), I’ve decided to postpone the endoscopy and liver biopsy until we get the thyroid under control.  A cat with uncontrolled hyperthyroidism is a bit of an anesthesia risk. It behooves us to regulate the thyroid first, and once that’s done, continue our diagnostics.

I prescribed methimazole to control the thyroid.  The cat will come back in two weeks for me to check the thyroid level.  If it’s normal, we’ll proceed with the endoscopy, etc.  Of course, I’ll keep you all informed of the results.

Stay tuned for the conclusion to this interesting case coming soon and remember to keep voting for this blog "Cat Man Do," a finalist in About.com's 2012 Reader's Choice Awards.  We need your help to win, so keep voting every day, share the voting page with your friends, and remember to tell them to vote CAT MAN DO.
Labels: A week in the life hyperthyroidism inflammatory bowel disease liver pancreas T4 Testing thyroid triaditis Veterinarian Veterinary Medicine