A few months ago I posted about rabies.  I thought I’d share with you the latest statistics regarding the occurrences of rabies in the U.S. in 2010.  In the U.S., wildlife is the most important source of the rabies virus, but spillover into domestic species does occur. 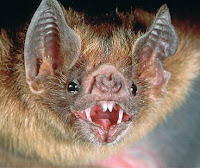 What caught my eye, of course, were the cat numbers.  Compared to 2009, rabies decreased in all species except cats, where there was a 1% increase. Two cases of rabies involving humans were reported from Louisiana and Wisconsin in 2010. Louisiana reported an imported human rabies case involving a 19-year-old male migrant farm worker who was bitten by a vampire bat while in Mexico. This represents the first human rabies case reported in the U.S. confirmed to have been caused by a vampire bat rabies virus variant.