Sex and the Kitty

Sex and the Kitty

Dr. Arnold Plotnick, cat expert gives us the scoop on the feline birds and the bees

The domestic cat is an incredibly prolific creature. In many cultures, cats have been admired (and even worshipped) for their reproductive capabilities. Bastet, the Egyptian goddess of fertility, is depicted as a cat in artwork.

This fertility, however, has a downside. The Humane Society of the United States, in promoting the importance of spaying and neutering in controlling the feline population, informs us of a startling statistic: if one un-spayed female cat and one un-neutered male cat were allowed to mate indiscriminately, and if each of the kittens in the subsequent litters were also allowed to breed, it could theoretically result in the production of over 400,000 kittens in just seven years! Clearly, controlling the reproduction of our domestic pets is important in reducing the number of unwanted animals that end up in shelters where most are euthanized. But how much does the average cat owner know about their beloved cat’s reproductive system and capabilities? Read on, and be amazed!
Boys vs. Girls

Let’s start with some basic anatomy. The major parts of the male reproductive system are the testes (also called testicles), the scrotum, and the penis.
The testes serve two functions: they produce the hormone testosterone, and they manufacture sperm. Because sperm production is influenced by testosterone, these two functions are largely complimentary. The testes are contained within the scrotum, which is located external to the body. The scrotum serves as a temperature regulator for the testes, keeping them several degrees cooler than the rest of the body. This is essential for the normal manufacture and function of the sperm.

Initially, the testes in the kitten are located within the abdominal cavity. Beginning a few days after birth, the testes descend downward. By six to eight weeks of age, both testes have moved into the scrotum. Normally there are two testicles present, however, occasionally one or both will fail to descend into the scrotum. This condition is called cryptorchidism (crypt = hidden; orchid = testicle). Bilateral cryptorchidism (both testes fail to descend) is very rare. Unilateral cryptorchidism is much more common. Because most undescended testicles are retained in the abdomen where the temperature is higher than the scrotum, that testicle is unable to produce sperm.

The major organs of the female reproductive tract are the ovaries, the Fallopian tubes, the uterus, vagina, vulva and mammary glands.
The mammary glands are located in two rows along the outside of the abdomen, running from the groin to the chest. Cats typically have four pairs of mammary glands. The glands store and secrete milk. The ovaries, Fallopian tubes and uterus are located inside the abdomen. The right and left ovaries are located just behind the kidneys. Ovaries produce eggs, as well as important hormones (estrogen and progesterone). The ovaries are connected to the uterus by small ducts called Fallopian tubes (also called oviducts). The uterus is shaped like the letter “Y” with the “arms” of the Y being longer than the stem. These “arms” of Y are the uterine horns, and it is where fertilized eggs develop into fetuses.

The uterine horns join together to form the short “stem” of the Y, which is the body of the
uterus. At the very tip or base of the Y is the cervix. The cervix is a muscular tube that separates the
uterus from the vagina. The vagina provides a passage way from the outside of the body to the uterus.
It also provides a protected passageway for the fetuses as they travel from the uterus to the outside
during birth. The vulva is the external opening of the genital tract. 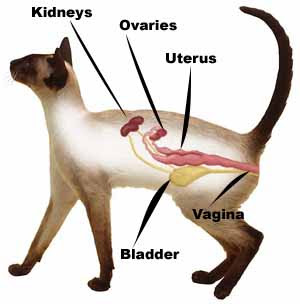 In the Northern Hemisphere, the days get longer in late January and early February. The changes in the light-dark pattern causes queens (female cats) to begin the reproductive cycle, coming into heat approximately every two weeks. This usually continues until late September. In the later months of the year - October, November, and December - cats tend to stop cycling until the new season resumes again in late January. Siamese cats are less affected by photoperiod than other breeds and often cycle all year round.

Puberty occurs between 5 and 9 months of age, on average. This is when sexual development generally begins. As the weather gets warmer and the number of daylight hours increases, female cats will experience estrus, also known as “heat”. This is the period in which a female cat will allow males to mate with her. Each heat period varies in length, but typically lasts between 5 days and 3 weeks. If the female does not successfully mate with a male during a heat cycle, she will experience repeated cycles every 12 to 22 days. Unlike dogs, who will often have a bloody vulvar discharge during their heat period, cats show little or no discharge. “In cats, the main signs of heat are behavioral”, says Dr. Michael Stone, board certified internist at the Cummings School of Veterinary Medicine at Tufts University. “You typically see excessive vocalization, rubbing their head and neck against people and objects, becoming very affectionate, rolling and squirming, making ‘treading’ movements with her back legs, and assuming the mating posture – the rump in the air, tail deflected to the side, and back arched downward.”To some owners, it may look like the cat is in pain! She’s not. “A few cats show minimal behavioral changes and can get pregnant without their owners ever realizing that they were in heat”, notes Stone.

Cats are at their peak fertility between the ages of 1 ½ and 8 years. If allowed to mate naturally, a typical queen having 2 – 3 litters a year, with 3 – 4 kittens per litter, can have anywhere from 50 to 150 kittens in her lifetime. 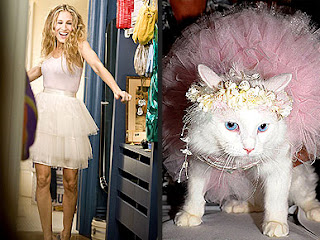 When a female goes into heat, the smell she gives off and the vocalizations she produces alerts the male cats in the neighborhood. If several tomcats are nearby they may gather around the female, engaging in fights with rivals. The victorious male will then pursue the female, who may appear to be playing “hard to get”. Initial, premature attempts to mate by the male may elicit an aggressive rebuff by the female. After a few minutes, however, the female becomes willing to mate and will adopt the mating posture. The male will grasp the female by the skin over the nape of her neck and begin copulation. The actual act of copulation is very short, lasting about four seconds. When the male ejaculates, the female will vocalize loudly, hiss violently, and aggressively swat the male away. She then rolls around on the ground while the male retires a discrete distance away. This mating process is often repeated several times, and females may mate with more than one male during their heat cycle. This can result in a variety of different fathers responsible for the same litter. In fact, it is possible for each kitten in a litter to have a different father! (The technical term for this is “superfecundity”.) The males depart after mating and do not participate in the care of their kittens.

Let’s Get Technical: the Hormone Story

Hormones play an essential role in feline reproduction. “As winter turns to spring and the ratio of daylight to darkness increases, the increased daylight stimulates the pituitary gland in the brain to release a hormone called follicle-stimulating hormone, abbreviated FSH”, says Dr. Stone. “This hormone causes the ovaries to produce eggs. When the female cat mates with the male, the pituitary releases another hormone called luteinizing hormone (abbreviated LH). This hormone stimulates ovulation – the release of eggs from the ovary.” Once the eggs are released, they travel down the Fallopian tube into the uterus, where they encounter sperm from the male. Eggs that become fertilized implant themselves onto the wall of the uterus, where they develop into fetuses. “The ovaries now secrete the hormone progesterone. This hormone is responsible for maintaining the proper conditions in the uterus for the growth of the fetuses. About ten days before the kittens are born, the progesterone level falls, and estrogen levels start to increase”, says Dr. Stone. If the names of some of these hormones sound familiar to you, it’s because they are the very same hormones that regulate the human reproductive cycle.

Pregnancy in the cat lasts, on average, about 63 days; it can vary, however, from 58 to 69 days. About ten days before the kittens are born, the progesterone levels begin to drop and the estrogen levels start to rise. These hormonal changes give rise to nesting behavior in the female; she knows that labor and delivery are approaching and will start exhibiting nesting behavior, seeking and preparing a safe place to have her babies. Preparing a cardboard box lined with soft towels and showing this to her is recommended. It should be in a warm and cozy place, but still observable to the owner.

The birthing procedure is a natural process for cats and usually proceeds without any problems.
The birth process proceeds in three stages. Initially, the cervix relaxes and the uterus begins to contract.
In the second stage, the contractions become stronger and more frequent, propelling the first fetus
toward the pelvis. When the fetal head fully enters the pelvis, its pressure causes the cat to voluntarily
contract her abdominal muscles. This deliberate push helps propel the fetus through the pelvis. Once
the head emerges from the vulva, one or two more pushes from the female should result in delivery.
The third stage follows immediately after the kitten is born and is simply the passage of the fetal

membranes, including the dark greenish-black placenta. As each kitten is born, the queen will tear open
the membranes and clear the kitten’s mouth and nose. She will also bite off the umbilical cord and
eat the placenta. The interval between kittens is variable. On average, it takes approximately an hour
between kittens. The average litter size is four.

Although the ultimate goal is for all U.S. shelters to adopt a “no-kill” policy, sadly, this isn’t going
to happen in the foreseeable future. Millions of cats and dogs continue to be euthanized at shelters
across the country. A major part of the responsibility of cat ownership is making sure that your cat
doesn’t reproduce. Spaying is the surgical procedure performed on female cats. The medical term for
this surgery is ovariohysterectomy – removal of the ovaries and uterus. Neutering or castration is the
procedure used for males. In this procedure, the testicles are removed.

A popular misconception is that it is better for a female cat to come into heat at least once, or to have one litter before spaying. Medical evidence, however, shows the opposite to be true. “Cats that are spayed before their first heat rarely, if ever, develop mammary tumors. This is important, as most feline mammary tumors are malignant”, says Dr. Stone. Also, your cat doesn’t have to have a litter for your children to learn about “the miracle of birth”. Letting your cat have kittens that you have no intention of keeping is a poor lesson for children. There are many videos and books available that can teach children about birth in a more responsible way. Having your cat neutered or spayed is the ultimate sign of responsible pet ownership.

Why You Should Spay or Neuter Your Cat

Early Spaying and Neutering in Cats. Get ‘em while they’re young.

Cats Are The 1%!! Get Your Cats Spayed or Neutered.