I remember a few years ago, David Letterman joked in his monologue that he saw an ad that said, “Lose weight without diet or exercise!”  Well, said Letterman, “that pretty much just leaves disease”.

I see a lot of overweight and obese cats in my practice, and I’m always happy to see these cats shed some pounds.  But last week, I saw two cats with dramatic weight loss, and I wasn’t all that happy about it.  Why?  Hint: it wasn't due to diet or exercise.

The first cat was Batman, owned by Ms. Catlubba (client's name has been changed).  Ms. Catlubba is my longest active client.  I took care of her cats when I was at the ASPCA.  She found out that I started my own practice a few years later and tracked me down, so I’ve been caring for her cats for 14 years now.  Her cat Batman used to be 20 pounds.  Granted, that’s huge, but it’s not like he was a 20 pound cat in a 10 pound body.  He was a 20 pound cat in a 16 pound body.  At 20 lbs, he wasn’t grossly obese, but still, if I were him, I wouldn't wear a Speedo at the beach.

Ms. Catlubba brought Batman in for weight loss.  I asked about his appetite, and she said it was still pretty good.  She thought he was drinking a lot and urinating a lot.  When cats lose weight and have increased thirst and urination, a couple of diseases immediately spring to mind:  hyperthyroidism, diabetes, and chronic kidney disease.  Cats with kidney disease tend to have poor appetites.  Cats with hyperthyroidism or diabetes tend to have excellent appetites.  About a month before this appointment, Ms. Catlubba brought in her cat Lucky with similar signs.  Lucky was diagnosed as being hyperthyroid.  We started him on methimazole, the oral medication we use to control hyperthyroidism, and he responded well.  His elevated thyroid level quickly dropped to normal, and his clinical signs resolved.  I figured Batman was hyperthyroid as well, because in my veterinary practice, things like to come in two’s and three’s, for some weird reason.  Batman was an older cat (14) and most diabetics tend to be younger.

I drew blood and got some urine, and sent it to our laboratory.  I was pretty surprised to discover that Batman’s blood sugar was in the 400s!  (Normal is 65 to 165).  No big diagnosis mystery here... 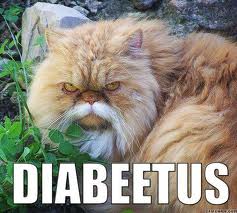 My observation about things coming in two’s and three’s was correct, because  the very next day, another long-time client, Mrs. Kibbletreat (name changed), brought in her cat, Tux, because he was losing weight.  Tux was another 20 pounder, and he came in weighing 14 lbs.  She said that he was drinking a lot, urinating a lot, and eating like a pig.  She said that he was a little weak in his rear legs, she thought.  He was having a little trouble jumping up on the couch, even though he had lost weight.  Tux was 8 years old.

I told Mrs. Kibbletreat that her cat was the absolutely classic textbook description of a diabetic:  an 8 year old, indoor, sedentary male cat that was drinking a lot, urinating a lot, eating like a pig, losing weight, and weak in the rear legs.  You could not have scripted it any better.  I took blood and urine samples, but rather than wait for the lab to tell me what I already kinda knew, I grabbed the glucometer and measured Tux’s blood glucose right on the spot.  It was in the 400s.  Two newly diagnosed diabetics in two days.

The incidence of diabetes is definitely increasing in the cat population.  There are several theories why this is happening.  Lots of people are blaming dry food, saying that the increased carbs in the food is leading to diabetes.  However, there’s no scientific evidence to back up that claim. (I know I’m opening up a can of worms here, but to anyone who disagrees: show me FACTUAL support for your argument, rather than opinion or anecdotes before you start writing.)  From what I’ve read, dry food increases the risk of cats becoming overweight, and being overweight predisposes cats to diabetes.  It’s not the dry food per se.  It’s the weight gain.

So what happens next for these cats?  Well, the first thing I did was run a fructosamine test on them.  Measuring the fructosamine levels essentially answers the question, “How well-controlled has your cat’s diabetes been over the last two weeks?”  I know that the fructosamine level will come back high, and that’s because the diabetes hasn’t been controlled at all.  But that’s our starting point.  Next, we start the cat on ProZinc insulin, 1 unit twice daily, for the next two weeks.  We also switch to a new diet, a high protein/low carbohydrate diet, like Purina DM or Hill’s MD.  Then I’ll measure the fructosamine again.  This time, it will answer the question, “How well controlled has the cat’s diabetes been over the last two weeks  with your cat on 1 unit twice daily?   If the fructosamine has dropped into the normal range, then that’s the cat’s dose: 1 unit twice daily.  If the fructosamine is lower, but still higher than we like, we tell the owner to increase the dose to 2 units twice daily, and we check the fructosamine again in 2 weeks.  The typical diabetic cat requires anywhere from 1 to 4 units on insulin twice daily.  If we’re lucky, the cat comes back two or three times until we find the correct dose.  If we’re not so lucky, it may be 4 or 5 visits before we discover the proper dose.  From that point on, it’s usually smooth sailing, with us checking the cat every six months.

I have no doubt both cats will do well.  Both clients are conscientious cat owners who will watch over their kitties the way parents watch over their children.  Once we get the cats regulated, the increased thirst and urination will diminish, the cat will gain back some of the weight, and the ravenous appetite will decrease a bit.  Tux should gain some of the strength back in his rear legs, too.   Occasionally we get lucky: in some cats, the diabetes goes into remission and the cat can usually be maintained on diet alone, with no insulin necessary.  That would be ideal.  When it happens, it usually occurs in the first six months after diagnosis, so we’ll be watching closely.

Next week, you’ll hear about the case I had two days ago – a cat with elevated liver enzymes and a discharge from one of her mammary glands.  Stay tuned!