Facts and Myths about Feline Spaying and Neutering 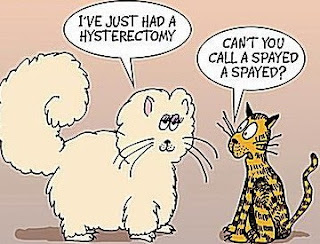 Spaying and neutering are probably the two most common surgical procedures performed in veterinary practice.  The primary purpose of these procedures is to take away the ability of cats to reproduce.We use the term “spay” to describe the surgery performed on a female cat.  The proper medical term for the surgery is an ovariohysterectomy – the removal of the ovaries and uterus.  “Neutering” is the term we use to describe the surgery performed on males.  The medical term is orchiectomy, the removal of the testicles.  Another synonym would be castration.  Frankly, neuter sounds less, um, aggressive.

SEE ALSO: Why You Should Spay/Neuter Your Cat Reducing feline overpopulation is not the only benefit to spaying and neutering.  If you spay a female cat before they ever come into heat, they will almost never develop mammary tumors in the future.  After one heat, spaying still significantly reduces the risk.  After two heats, there is no mammary tumor-sparing effect.  Spaying also reduces the risk of developing ovarian and uterine cancer.  Pyometra is a uterine infection that is potentially life-threatening.  Spaying a cat removes the uterus, thus eliminating the risk of pyometra development.  Neutering a male cat obviously eliminates the possibility of developing testicular cancer.  Dogs that aren’t neutered are at significantly increased risk of developing prostate disorders.  Male cats, for some reason, almost never develop prostate disease, regardless of whether they’re neutered or not.

Despite the health benefits listed above, some cat owners still harbor fears about neutering and spaying.
One concern is that the cat’s behavior will change after spaying and neutering.  There is a little truth to this, but the change is usually for the better.  When female cats come into heat, they can become agitated and restless, and their constant vocalizing can be an annoyance.  Intact male cats are increasingly more likely to mark their territory by spraying urine on a variety of surfaces.  Spaying and neutering eliminates the heat cycles in females, and prevents or reduces urine spraying in males.  Most people would agree that these changes in behavior are beneficial changes.   Intact males and female are on a perpetual quest for a mate, leading to a greater likelihood to roam.  This increases the chances of injury such as automobile accidents, as well as increased risk of fighting with other cats, if they cross into another cat’s territory while roaming.  Roaming also increases the chances of the pet getting lost.  Intact males tend to be more aggressive, and this could lead to fights with other cats.  Cat fights are a common way that the feline leukemia virus and the feline immunodeficiency virus are transmitted.  Many studies have confirmed that intact males are more likely to contract these viruses compared to neutered males.

Another concern regarding spaying and neutering is that the cat might gain weight after the procedure.  There is some truth to this one as well.  The hormones that are produced by the ovaries and testicles do drive metabolism and help cats burn calories, however, spaying and neutering does not automatically doom your cat to a life of obesity. Because we know that the metabolism will slow down after spaying and neutering, we can prepare for this by increasing exercise and decreasing the caloric intake a little.  Certainly, the health and behavior benefits of the procedure far outweigh the risk of gaining a little weight.

Many cat owners fear that the surgical procedure itself is dangerous.  Of course, there is always an inherent risk with any anesthetic procedure; I’d be lying if I said there wasn’t.  But because the vast majority of cats undergoing the procedure are young and healthy, the risk is truly minimal.  Occasionally, an infection may occur at the incision site, or a surgical incision may open up prematurely, but this is a very uncommon complication.  I’ve been spaying and neutering for 25 years.  I’ve gotten to a point where my spay incision is so tiny that you can barely see it.  The incision is small enough to be held together with surgical adhesive rather than stitches.  This eliminates the need to come back in ten days to have the stitches removed, and more importantly, it removes the need to have your cat wear those cumbersome Elizabethan collars that they hate.  My clients are thrilled when they find out their cat needs no collar and has no stitches.

Besides preventing unwanted pregnancies, spaying and neutering offer a variety of health and behavioral benefits, and it is clearly the responsible thing to do for our pets.
Labels: cats Health neuter Questions/Answers reproduction spay surgery Veterinary Medicine