Type B, or Not Type B - Henry Saves a Life

Last Tuesday, at our hospital, Manhattan Cat Specialists, we were scheduled to perform surgery on Galet, a 6 year old domestic longhair.  Galet is a challenging case.  She is FIV positive.

As most of you know, FIV is the feline equivalent of HIV.  Cats acquire this infection usually though the bite of another infected cat.  Initially, cats may show a little fever and possibly some swollen lymph nodes upon infection, but they rapidly recover, and then continue with life as if nothing has ever happened to them.  However, over the years, the T-cell count continues to drop, until there are too few T-cells to protect the cat against illness, and opportunistic illnesses and infections start to occur.

Galet has a mass at the back of her throat.  It is a soft mass, and at the moment, food is able to pass around the mass, enabling her to eat.  Our concern is that as the mass grows, it will obstruct her ability to swallow, and she will no longer be able to eat.  The mass looks to be removable surgically, so that was our plan.  We performed pre-surgical bloodwork and were surprised to discover that Galet had become significantly anemic since the last time we tested her blood.  Although she still had enough red blood cells to be safely anesthetized, she was on the cusp.  We needed to find the cause of her anemia and treat it, so that she would be a better candidate for surgery.

There are many causes of anemia, and to list them all and explain how to figure them out is probably beyond the scope of this blog post.  Because Galet is FIV positive, and FIV suppresses the immune system, an infectious cause should be high on our list. 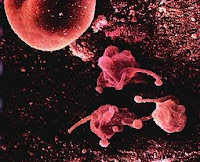 There is an organism called Mycoplasma (formerly known as Hemobartonella) that is an infectious cause of anemia.  It is a red blood cell parasite.  When this parasite attaches itself to the red blood cells, it makes the cells look different.  The immune system’s job is to recognize what is “you” and what is “not you”.  When it sees something that is not you, it tries to destroy it.  We tested Galet for this organism, and lo and behold, she tested positive.  Fortunately, Mycoplasma is treatable, and treatment was begun with the antibiotic doxycycline (which kills the organism) and dexamethasone (an anti-inflammatory drug that tells the immune system to stop attacking these different-looking red blood cells.)  Galet was to come back in a few days for her surgery, on the presumption that her red blood cell count would be improved and she would be stable for surgery.

Tuesday morning, I received a call from Galet’s owners.  They wanted to postpone the surgery because Galet was much weaker.  She could barely stand or walk, and they felt that she wouldn’t make it through the anesthesia.  They wanted to give the antibiotics and other medicines a few more days to kick in, so that she’d be a stronger candidate for surgery.

I was worried.  A cat too weak to stand or walk is in trouble.  Certainly we should postpone the surgery, but I suggested that they bring her in anyway, for me to evaluate.  They agreed.   On examination, she was indeed very weak.  I looked at her gums and could see they were pale, confirming the anemia.  The last time we saw Galet, her hematocrit (the percentage of her blood that is comprised of red blood cells) was 17.  The normal value is between 29 and 48%.  Our quick in-house test confirmed my fears.  Galet’s red blood cell count was a shockingly low 9%!  This is barely enough red blood cells to keep a cat alive.  While waiting for her medications to kick in, Galet’s anemia worsened, to a life-threateningly low level.   If Galet was going to survive this, she needed a blood transfusion.

Here’s where the problem arises.  Cats have distinct blood types.  The most common type is Type A.  Much less common is Type B.  Type B blood is more common in purebred cats, like Persians, British Shorthairs, Abyssinians, and Devon Rexes.  A handful of cats are the exceedingly rare Type AB. (I’ve never seen an AB cat, in 25 years of practice.)  Galet is Type B.

Obtaining Type A blood is not usually a problem.  We usually purchase a unit of blood from one of the large referral centers in town.  We called one place, and we were told that they had a few units of Type A blood, but no Type B.  We called the other place.  Same story.  Yikes.

Some of our followers may remember hearing about my elderly cat Ethel in the early days of Manhattan Cat Specialists.  In her old age, Ethel became deaf, and then eventually blind.  We let Ethel live out her last months in our makeshift hospice, where she had her bed, food and  water bowl, and litter box all within easy access.  A few months after we opened in 2003, a woman came into our hospital holding basket containing a sweet young teddy bear of a cat.  She asked if she could donate the cat to us, for us to adopt out.  Our first instinct was to say no, as we work closely with two reputable rescue groups who provide us with cats for adoption.  Taking in cats willy-nilly was a clear recipe for trouble.  But this was the early days of MCS, when we were perhaps a little less strict about these things.  Plus, he was so cute that we just couldn’t say no.  We took him in, dubbed him “Petey”, and set the wheels in motion for him to be on our adoption block.  Interestingly, the woman who initially donated Petey to our hospital said that he was part Persian.  He didn’t really look the part, but when we blood typed him, lo and behold, he was Type B.  Perhaps he had some purebred blood in him after all.

Petey’s first days at our cat hospital overlapped with Ethel’s last days.  We did our best to break through Ethel’s veil of silence and darkness, giving her lots of attention and affection.  One of the highlights of her day (and ours) was when Ethel would get up from her comfortable towel and walk a few steps to the cushy bed a few feet away.  Despite her age, deafness and blindness, she could still navigate short distances.

One day, Ethel decided to seek out the cushy bed, only this time, Petey was already occupying it.  My staff and I were curious to see what would happen when Ethel discovered another cat sleeping in the bed.  Ethel made her way over to the bed, and ignored the big fuzzy lump that was occupying half of it.  In fact, she just curled up right next to him and made herself comfortable.  Petey looked over, put his arm around her, and welcomed her.  That moment (and the photos we took of it) has become the stuff of MCS legend, and we never get tired retelling the story or looking at the pictures.

Well, we did eventually find a nice home for Petey (number 33)  He was adopted out to Ann and Bruce, clients of ours who had recently lost their beloved cat to cancer of the salivary gland.  They renamed him Henry, and for the last few years, he’s been living the life of a king.  (King Henry the VIII, to be precise. His weight ballooned from 9 lbs to 16 lbs!)

Back to the present.  With Galet fading fast, and no Type B blood to be had, we called Ann and Bruce and asked if they would be so kind as to ask Henry if he would let us borrow a unit of blood to save a fellow cat’s life.  Remembering how selfless he was with Ethel, it’s no surprise that Henry agreed to spare a unit.  Henry arrived around 2:00 with his owners in tow, and we got our unit.


Galet’s red count afterward:  18!  We had doubled the amount of red blood cells in her body.  She left feeling great, standing up and walking around with renewed strength and vigor.  Galet’s owners were very grateful to Henry and his owners for graciously donating the life-saving blood.  We sent Galet home, and will recheck her red count in a few days.  Once the medication kicks in and the anemia resolves, we’ll move forward with the surgery to remove the mass in her throat, and hopefully Galet will get to live for many more months.
Labels: A week in the life blood blood transfusion cats FIV mass surgery Veterinarian Veterinary Medicine