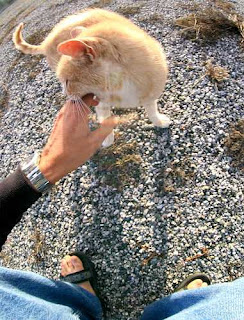 Sexual aggression in a neutered male cat.  Here’s what Dr. Nick Dodman has to say on the matter:

QUESTION: My 11-year-old neutered male cat has in the last few weeks started being sexually aggressive to my 11-year-old spayed female cat.  They were foundling litter mates and have grown up together.  I have noticed that Alexander is trying to mate with Ashley.  He only exhibits this behavior at night.  What is causing this new behavior, and what can I do to stop it?  Thank you for your help in this matter.


We have noticed that some neutered male cats do exhibit sexually aggressive behavior to females living in the same house. Typically, the two cats get on well most of the time and may even eat and sleep close to each other without a problem. But there are times when the male (who, I jokingly say, suddenly grows a little pair of Cialis horns, runs after the female, on catching her bites her in the neck and pins her, sometimes midst flying fur and screaming on part of the female. We normally try treating this behavior first by changing the odor of the female through the application of the male pheromone androstenol (Boarmate®) to the female’s rump every other day. Then, when the male cat comes speeding around the corner to assault his victim, he suddenly screeches to a halt and wanders off somewhat confused as if to say “excuse me sir, I must have you confused with someone else.” It is not surprising that a neutered male cat might sometimes act like a male, since neutering does not create an “it”, but rather a neutered male who retains some male characteristics. Alexander may be a little more male than most, perhaps because he was sandwiched between two other males in utero and got a double dose of testosterone from these neighboring fetuses.

The only thing that is really odd about your case is the sudden appearance of this behavior at a relatively late stage in life. This does make me wonder whether there might be some underlying hormonal problem, such as hyperthyroidism or even an adrenal tumor, catalyzing the event. I would take up this latter possibility with your local vet and see what you can learn. Keep us posted.