Reader Question: Can't We All Just Get Along? 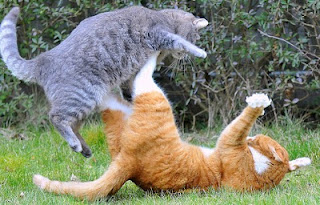 My colleague, Dr. Alice Moon-Fanelli, weighs in on the strife between two cats who used to be best buddies.

QUESTION: I have 2 male cats that I adopted from a local no-kill shelter.  Thamr will be 9 in November and Teyba is 7.5 years old.  Both are FIV positive and Teyba has cerebellar hypoplasia as well.  I adopted them at the same time 3 years ago but they did not grow up together - they met and (seemed to me) bonded in the shelter so I took them both home.

Except for about a month's reorientation time in the beginning, they have gotten along extremely well most of the time.  They both seem to want to be the Alpha male, but Teyba's coordination problems keep him from winning most king-of-the-mountain battles.  Up until recently, Thamr seemed to give Teyba a break and take it somewhat easy on him.  They are indoor (and on the porch) only cats now but I think they both did time as strays in past lives.

However about a week or two ago, I started to hear Teyba yowling because Thamr was threatening him and several times I saw Thamr jump up and bite Teyba for no apparent reason or I'd catch him trying to intimidate Teyba out of whatever perch he'd been laying on.  Teyba seems skittish and anxious unless I keep them isolated from each other.

I've been trying to keep them in separate parts of the house (difficult but mostly successful).  Is there anything you'd recommend for me to do?  Can you understand why this is happening?  Please give me any ideas you may have about this.  Thanks!


I can speculate on a number of reasons why Thamr’s and Teyba’s seemingly solid relationship has deteriorated over the past week or two, however with the available information, it is impossible to pinpoint an exact cause.  I will suggest some possible explanations for you and your local veterinarian to consider and then briefly outline a management and reintroduction protocol that should help you reunite the boys over time.

When noting a behavioral change in family cats it is always prudent to consult with your veterinarian to rule out any medical conditions that could be contributing to the problem.  This is especially true for middle-aged cats with an existing disease history.  Has either cat had any FIV symptom flare-ups? Is Teyba’s cerebellar hypoplasia being satisfactorily managed?  If you have noticed no deterioration in their health and no new medical concerns are identified then we can consider environmental causes for the seemingly sudden exacerbation of their occasional irritability with one another to full blown stalking and attacks.

Has either cat been taken to the veterinarian or removed from the house so that he might smell and act differently?  Have you noticed any roaming cats or other animals outside windows where the cats perch that might increase Thamr’s anxiety and trigger him to redirect on Teyba?  Any changes in your schedule that affects their daily routine?

The prognosis for a successful reunion depends in part on the reason their relationship has suddenly deteriorated and I have insufficient information to make that determination.  Continue to keep them separate and try to institute a gradual reintroduction program paired with positive experiences.

This process typically involves separating both cats to ensure that they can’t see each other.  Alternate their environment at least once per day so they can each spend time in parts of your home that was previously occupied by the other cat. This will discourage them from developing territories within your home.

Once they are relaxed at this stage, you can encourage the cats to eat on opposite sides of a closed door.  You want them to learn that good things happen when they are in close proximity to each other.  Although they cannot see each other, they will be able to hear and smell each other from behind the closed door. This should increase Teyba’s confidence and hopefully quell Thamr’s aggressive tendencies.

Once both cats are relaxed and willing to eat on opposite sides of the closed door, gradually increase their visual exposure by first cracking the door a bit and eventually separating them by a covered screen.  Over time remove more and more of the covering until they are in full view of each other. They should be curious but not aggressive.

The final step is to introduce them in the same room together.  For initial introductions, both cats should be restrained on harnesses or in crates. Place them on opposite sides of the room and feed them as you did in the previous steps.

Over time, the cats can be moved closer and/or can be allowed to spend more time together, though they should remain physically restrained.

The final step is to free one cat and observe his response. On the next feeding, free the other cat.  They should show friendly interest in each other without apprehension or aggression.  Finally, free both cats but be ready to separate them should a fight erupt.

The key to successful reintroductions is to start low and go slow!  If you are not making progress at any stage of this process, you may wish to speak to your cats’ veterinarian about prescribing serotonin enhancing medication for Thamr to help stabilize his mood to facilitate the reintroduction process.  It also is advisable to seek the advice of a certified applied animal behaviorist or a veterinary behaviorist to guide you through the reintroduction process as it can be a very lengthy procedure and setbacks often occur.

The actual length of time your cats will require to become consistently friendly to one another again will depend on their unique personalities, the reason for their recent falling out as well as your patience and persistence. Good luck with the boys!  I wish them a successful reintroduction and hope their health remains stable.