What's in a Name?

The other day, a new client brought me his two year old cat for examination. As he reached into the cat carrier to retrieve his cat, he said, excitedly, “Look, Pepper, meet your new vet!”

Now, I’m not a superstitious person at all, but the moment I heard the name “Pepper”, I got a little antsy. You see, the previous week I was scrolling through our practice’s veterinary software, perusing the names of my patients, when I noticed something that struck me as curious, to say the least. During my practice’s seven years of existence, we’ve encountered 13 cats named Pepper, and they all now had one very salient characteristic: they were all dead. 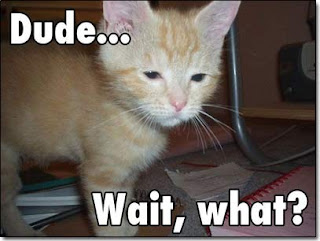 Even the very next cat in the “P” section, Peppermint, was deceased. Naturally, I didn’t mention this to Pepper’s owner (I figured that it was probably not the best way to retain clients), but it did get me wondering about the names of the cats in my practice. During my perusal, no other cat name was associated with such doom and gloom (although I did notice that all six Woodys were deceased), but the names and the frequencies of some of the cat in the practice were pretty interesting.

If you go by sheer numbers, the name Max would be the hands down winner, with 45 cats going by that moniker. This includes 3 named Maxi, 2 named Maximilian, 2 Maxwells, and 2 Maxines. If you’re a purist, then only 36 qualify with the true three-letter “Max”. Regardless, it’s still the winner.

Close behind is Lily, with 34. Again, though, I’ve included Lili, Lillie, Lilly, and one Lilith in the mix. Flower names turn out to be pretty popular, with 14 Daisys and two Roses.

Next comes the rather unimaginative “Kitty”, with 33. The unimaginative names tend to be the exception, though, rather than the rule. Quite a few of my clients seem to delight in naming their cats, looking for precisely the right name that reflects their cat’s inner charm and personality. A friend of mine who shall go unnamed (on second thought, screw that; his name is Dan Karan) is not one of my more creative clients. He has four cats. Two are brother and sister, which he aptly named “Brother” and “Sister”. If you think that’s boring, you should meet his third cat. The cat is black. Can you guess the name? It gets worse. The fourth cat is literally named “No-Name”. Brother, Sister, Blackie, and No-Name. If we gave an award for the Most Uninspired Cat Names, Dan would be undisputed world champion. (I do have three clients who christened their kitty “Cat”, the ultimate in boring names. To her credit, though, one client spells it in capitals, CAT, which she says is an acronym for “Claws And Teeth”.)

We have a couple of cats whose most salient feature must be their odor: 1 Smelly, 3 Stinkys, and 1 Stinker.

If we were truly a smoke-free environment, we’d have to ban the four named Smoke. (We could admit the 11 named Smokey, though. We’re Smoke-free, not Smokey-free).

We have 8 Ziggys; 9 if you include “Ziggaboo Modaliste” in the group.

We have 4 named Lakshmi, after the Hindu goddess of wealth and prosperity. One or two wouldn’t have surprised me, but four?

Cats like chicken, but do they liked to be named Chicken? Let’s ask the 3 in our practice.

We have two Nairobis. Weird.

A few of our cats prefer to be addressed formally. These include Mr. Poo, Mr. Squishman, Miss Cleo, and Miss Lucy. And then there’s the interesting trio of Miss Kitty, Mrs. Kitty, and Ms. Kitty.

A few cats are named with the qualifier “Little”, such as Little Boy (three of them), Little Big Man, Little Cat, Little Girl, Little Grey, Little Kitty, and one named just plain Little.

We’re surprisingly plentiful in cats named Zoe. We have 25. Twenty-seven if you count the 2 more who spell it “Zoey”, and twenty-eight if you toss in the one who spells it “Zooey”. The latter one has a housemate named “Franny”; clearly his owners are Salinger fans. The cat who spells it “Zoey” also belongs to Salinger fans, because Zoey also has a housemate named Franny. I think they should have spelled it Frany, to be consistent.

Last week I examined two feline housemates, Momo and Popo. I told the owner that just the previous week, I saw another cat named Momo. She was shocked, and perhaps a tiny bit disappointed that her cat’s name wasn’t as unique as she thought it was. In fact, we have 8 Momos in the practice. Seven of them belong to Japanese clients, though. Apparently, Momo means “peach” in Japanese. This client, who is not Japanese, didn’t realize the name had any significance. I think she felt better when she heard that her Popo was the only Popo in the entire practice.