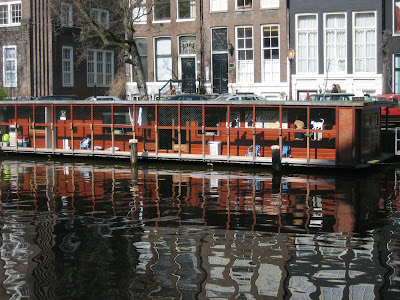 As the owner of a busy feline practice in Manhattan, finding time for vacation can be tricky. All work and no play, however, makes for a cranky veterinarian, so when one of my doctors offered to work an extra two days around Memorial Day weekend, I seized the opportunity and set my sights on...The Netherlands! Although most people cite world-class museums, beautiful canals, tulips and windmills as the primary enticements for a trip to Holland’s enthralling capital, only a crazy ailurophile (yours truly, guilty as charged) would list the Poezenboot – Amsterdam’s famous cat sanctuary – as his primary motivator. That being said, I left New York’s JFK airport on Thursday night and touched down in Amsterdam on Friday morning. After an early check-in at the hotel, I was out the door – map in one hand, notepad in the other – to get the real story of this floating feline shelter.

The Poezenboot (pronounced “poozin-boat”) tale begins in 1966 with a family of stray cats who had set up shop under a tree bordering Amsterdam’s Herengracht canal. Worried that these kitties were struggling to fend for themselves, a good Samaritan named Henriette van Weelde took them into her home. Word spread about Henriette’s compassion, and people began to bring her cats that they found or couldn’t keep. Before long, she had amassed a collection of cats that she could no longer properly care for. Noting that people were living comfortably in houseboats on the Herengracht canal, it occurred to Henriette that cats could do the same. In 1968, van Weelde bought a Dutch sailing barge. She refurbished the interior, and the first cats were moved in, accompanied by a dedicated bunch of volunteers to help love and care for them. Eventually, the cats outgrew their first home and a new one was purchased in 1971. In 1979, van Weelde bought a substantially larger boat. It was overhauled in 2001 to meet all the legal requirements for a modern shelter, and now exists as the current Poezenboot.

The Staff and the Residents

After exchanging pleasantries with the warm reception staff, I was escorted to the adoption area. The first thing I noticed upon entering the cat area was the smell: there was none. The adoption area is completely spotless and odorless. The only things that litter the floor on this boat are cat toys, cat beds, and scratching posts.

I was given a detailed tour of the boat by Ruth Wearing, a volunteer who works on the boat three days a week, and has done so for the past four years. As I crouched down to pat an elderly mackerel-and-white cat named Kiss, Ruth, in her charming British accent, gave me his backstory. On three occasions, Kiss was placed in a home, and all three times he found his way back – voluntarily – to the Poezenboot. Kiss’s homing tendencies were influenced more by Cupid’s arrow, however, than by instinct. Apparently Kiss missed his girlfriend Granny, a sassy little calico who also lives on the boat. Now too attached to each other to be separated – and too loved by the staff to be parted with – Kiss and Granny happily live out their lives together as permanent residents of the boat.

Judith Gobets is the manager of the Poezenboot. If multitasking were considered an art, then Judith deserves her own wing in Amsterdam’s van Gogh museum. Judith’s job includes a little bit of anything-and-everything. “I guess you could say that my job is to keep the Poezenboot afloat”, she told me. “I buy cat food. I take the cats to the veterinarian. I do all of the paperwork. And of course”, she adds, “I spend a lot of my time trying to raise money”. I asked Judith how most of the cats on the boat are acquired. “Oh, there are a lot of ways. Some are taken off the street by a local animal control foundation. The wild ones are neutered and released. We keep the tame ones.” Others are brought to the shelter for the same reasons as those in the U.S. “Sometimes the owner is moving and the new landlord won’t allow cats; a boyfriend, girlfriend, or family member is allergic, behavioral issues such as inappropriate elimination or destructive behavior, etc.” The boat can accommodate approximately 30 cats. If the boat is full, they have to turn the cats away. If there’s room, they’ll accept the cat, but they ask the donor to at least make certain the cat is current on vaccinations. This saves the boat money, and makes the cat more adoptable. In a typical month, the boat takes in approximately 15 cats, and adopts out roughly the same number. Once released from their initial two weeks in quarantine, cats are housed in cages where they can be viewed by prospective adopters. Those cats who have not been adopted after a period of time are not doomed to a life of cage confinement, however. Rather, they are introduced into the uncaged colony, where they can stretch their legs and socialize with their peers. The more feral cats are used to other cats and they assimilate into the group more easily. Those that lived in homes by themselves most of their lives often find the group housing too stressful, and they tend to stay in cages until they’re adopted. “Some of the uncaged cats are not for re-homing”, says Judith. “They are too feral and would not be happy having people so close by.” These cats are not put to sleep, however. The Poezenboot is a no-kill shelter; euthanasia, when it occurs, is only out of medical necessity, and never due to lack of space or difficulty in finding a suitable home.

I enjoyed socializing with the cats on the boat, but as the medical editor of Catnip, I was curious about the medical management of the residents. As one might imagine, managing the health of these cats can be a challenge. In the past, veterinarians used to visit the boat regularly to handle issues of health. Unfortunately, they cannot get any veterinarian to come to the boat regularly. If a cat gets sick, they take it to a local vet for care. Fortunately, the local veterinarian offers medical services at a discount, and this is very helpful. “The price of veterinary care here is high”, notes Judith.

When a cat arrives, it goes into mandatory two week quarantine, whether sick or not. The quarantine ward is completely separated from the rest of the boat. In fact, you have to exit the boat, walk a few steps on the street, and descend a separate set of steps to enter it. Cats are held in quarantine for two weeks, ample time for owners to claim their wayward cat. If no one puts in a claim, the cat is moved into the adoption area. The quarantine ward can hold approximately 9 cats.

All of the cats on the boat are tested for the feline leukemia virus (FeLV) and feline immunodeficiency virus (FIV), and are given appropriate vaccinations before adoption. Obviously, all cats are spayed or neutered before they can be adopted out, and are microchipped as well. In fact, microchipping is the law.

If any cat shows signs of infectious disease – sneezing, ringworm, diarrhea, etc. – they are moved to quarantine, and then promptly taken to a veterinarian. The Poezenboot staff are particularly vigilant about upper respiratory infections, since these can spread quickly through a cat population. It’s easier to monitor things like diarrhea or excessive thirst and urination in the cats that live in cages, but it can be a challenge to track these things in the cats that freely roam the boat. If bloody diarrhea or too much urine is seen in a communal litter box, the suspected cat is either isolated for further scrutiny, or the volunteers are told to be on high alert that one of the cats may have an illness brewing. “One reason why we use shredded paper in the litter box,” says Ruth, “is that it allows us to monitor urine output better than clay litter.” For those cats that require medication, the staff is not shy about giving it. “We’ve cared for blind cats and paralyzed cats,” notes Ruth. “We found homes for them, too”, she says, proudly.

My tour of the Poezenboot continued, and it included a peek in the cupboard. I quickly recognized the European versions of the same premium prescription diets that I use in my own hospital in New York. Ruth informed me that diet is taken very seriously on the Poezenboot. I notice Hill’s c/d, used for cats with urinary issues, Royal Canin renal diet for those with failing kidneys (like Kiss and Granny), and diets for cats with sensitive gastrointestinal systems.

I concluded my tour of the Poezenboot where I entered, at the reception desk, where I noticed t-shirts and other items for sale. With all the proceeds going right back into the boat, I purchased three shirts and a Poezenboot calendar. The shirt is now my favorite souvenir of my trip.

Henriette van Weelde passed away in 1987, but her floating legacy lives on, sheltering Amsterdam’s stray cat population with the love and devotion of a dedicated staff. The success and survival of the Poezenboot is entirely dependent on the generosity of others. To make a donation and learn more about this remarkable sanctuary, visit De Poezenboot
Labels: cats Health Poezenboot Travel