Cats are well known for being exceptionally clean animals.  They take pride in their appearance, grooming constantly to remove any offensive odors that might make them detectable to both predators and prey.  Occasionally, however, cats do emit a foul odor.  Although there are several possible reasons for a cat to be malodorous, as a cats-only veterinary practitioner, I find that halitosis, i.e bad breath, is the most common cause of fetid felines. 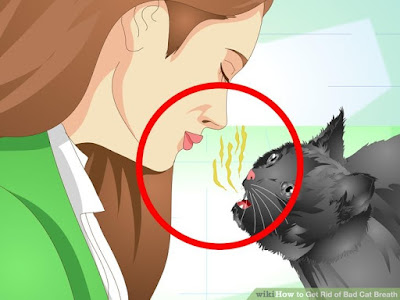 Periodontal disease – inflammation of the tissues surrounding the teeth – is by far the most common cause of stinky breath in cats.    Periodontal disease is initiated by a build-up of plaque, the sticky bacteria-laden coating on the tooth surface. As the immune system responds to the plaque, the gums become inflamed.  Gum inflammation is called gingivitis, and is the first stage of periodontal disease.  Bad breath often accompanies the gingivitis. As inflammation progresses, the second phase of periodontal disease – periodontitis – occurs.  Periodontitis is a condition where both the soft tissues and the bony tissues are affected.  Cats may develop receding gums, bone loss, and continuing halitosis.  If not removed from the tooth, plaque mineralizes into tartar (also called calculus) in a few days.  Calculus requires professional removal by your veterinarian. 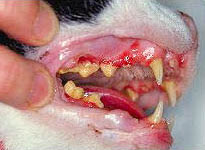 Although periodontal disease and gingivitis tend to develop as cats age, gingivitis can occur in cats as young as 6 months.  These cats often have little or no calculus accumulation.  We call this condition “juvenile-onset gingivitis”, and it is a common cause of halitosis in kittens.  The exact cause of this condition is unknown, but genetics is suspected to play a role, since purebred cats, especially Abyssinians, Siamese, and Persians are predisposed.  If left untreated, these cats may develop significant periodontal disease early in their adulthood.  Daily home oral care is recommended in cats with juvenile-onset gingivitis to avoid future dental problems.

Ulcers in the mouth can result in halitosis.  The calici virus is a common cause of feline upper respiratory infections.  Although sneezing, runny eyes, and a snotty nose may be seen in affected cats, an ulcer on the tongue is the classic finding in cats infected with calici virus.

Sadly, tumors of the oral cavity are not uncommon in cats, and halitosis is a frequent accompanying symptom.  The most common feline oral tumors are squamous cell carcinoma and fibrosarcoma.  As these tumors grow, a portion of the tumor may become infected or necrotic (non-viable), leading to an unpleasant smell from the mouth.  Early detection and aggressive treatment are essential for therapy to be successful.  Unfortunately, by the time most cats are showing clinical signs of their oral tumor, the condition has already progressed to a point where treatment isn’t possible.

Disorders of oral origin aren’t the only cause of halitosis in cats.  Systemic illnesses, such as kidney disease, can lead to bad breath in cats.  The role of the kidneys is to filter toxins from the bloodstream, creating urine in the process.  As most cats age, they eventually begin to show signs that their kidneys are weakening.  These signs may include excessive thirst, increased urination, poor appetite, weight loss, and vomiting.  As the kidney dysfunction progresses, cats may develop a condition called uremia, literally “urine in the blood”.  Uremia generally refers to cats with severely elevated toxins in their bloodstream.   Uremia results in a characteristically foul odor from the mouth.  The smell differs from the bad smell caused by dental disease.  As one of my colleagues once indelicately put it, cats with uremic breath smell like “something died inside their mouth.”   A crude description, but I can attest to its accuracy.   Cats with severe uremia will sometimes develop ulcers in their mouths, often on the sides of the tongue.  These ulcers contribute further to the halitosis. 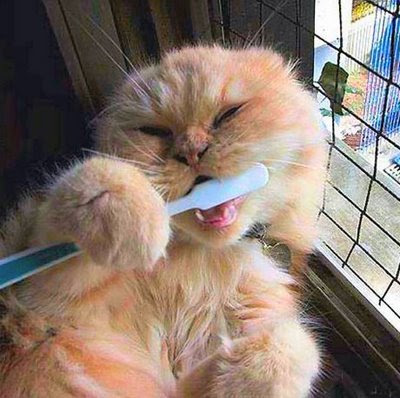 Diabetes is a common glandular disorder in cats due to inadequate or improper secretion of the hormone insulin from the pancreas.  Insulin is required for the utilization of glucose, which is the primary source of energy in cats.  Cats with diabetes usually require twice daily injections of insulin to maintain proper blood glucose levels.  If the diabetes remains undiagnosed or untreated, cats will metabolize body fat into molecules called ketones, in a desperate attempt to provide energy to the body.  Ketosis is a veterinary emergency, and affected cats are usually very ill.  Cats in ketosis have a characteristic smell to their breath.  The odor has been described by some as being “fruity”, and by others as faintly resembling acetone, the main ingredient in nail polish remover.  Whether ketone-breath qualifies as being offensive, like halitosis, is debatable.  Interestingly, people vary in their ability to detect this smell in cats, and apparently, the ability to detect it is genetic.  Some people have the gene that allows them to detect ketones instantly, while others are oblivious.  Sadly, I cannot detect it.  A doctor who worked for me a few years ago could smell it a mile away. 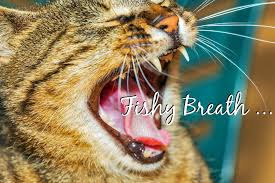 And finally, it should be said that halitosis is sometimes in the nose of the beholder.  I have examined many cats brought into my office with the complaint of bad breath and upon examination, the cats were discovered simply to have, for lack of a better term, “kitty fish-breath”.  Their mouths were normal – no dental disease, no oral pathology of any kind – and they had no systemic illness.  Cat owners must simply realize that if you feed your cat stinky food, it may end up with stinky breath.  However, because there are so many significant medical conditions that can lead to halitosis in cats, it’s best to err on the side of caution and have any offensive oral odors evaluated by a veterinarian.
Labels: cats Health