Chronic infection and inflammation of the nasal cavity and sinuses is a frustrating problem for cats, their owners, and the veterinarian. 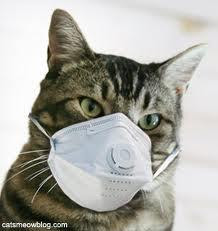 Upper respiratory infections are very common in cats, especially kittens.   Most of these infections are caused by viruses.  Approximately 90% of all upper airway infections in cats are caused by two common viruses:  feline herpesvirus and feline calicivirus.  Some affected cats develop secondary bacterial infections, which can make treatment and recovery longer and more difficult.

Acute sinusitis tends to affect young kittens and often causes sneezing, discharge from the eyes, a snotty nose, decreased appetite, lethargy, and usually a fever.  If oral ulcers are present, calicivirus is likely playing a role.  If corneal ulcers are present, the herpesvirus is most likely.  Many cat owners report a change in their cat’s meow, i.e. sounding more hoarse or even silent, or that the purr sounds more raspy. Treatment tends to be based on clinical signs.  Cats with conjunctivitis as a result of their viral infection often require antibiotic eye drops or ointments.  Secondary bacterial infections are treated with oral antibiotics.  Appetite stimulants may be warranted in cats that won’t eat.  Most of these acute infections are self-limiting, and cats usually recover uneventfully.

Some cats, however, do not recover uneventfully.  Sever viral infection can result in permanent damage to the delicate anatomy in the nasal cavity, which predisposes the cat to recurrent bacterial infections.  Complicating matters, the feline herpesvirus is notorious for taking up permanent residence in the cat’s body.  The virus can periodically emerge from its dormant state, causing a flare-up of clinical signs and further destruction of the fragile turbinate bones in the nasal cavity.  These cats are said to have chronic rhinosinusitis. 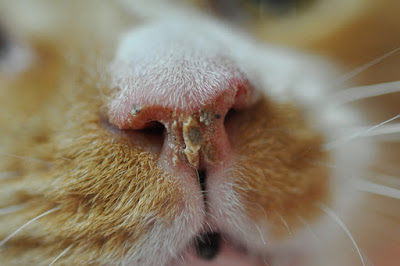 Chronic rhinosinusitis affects cats of any age.  The main clinical signs are intermittent or persistent sneezing, nasal discharge (either unilateral or bilateral), and congested breathing.  Discharge from the eyes is usually not present (although it can be, occasionally), and in general, these cats tend to not be systemically ill. Most veterinarians prescribe a short course (7 to 10 days) of antibiotics in cats with upper respiratory disease, and the fact that cats on antibiotics usually show clinical improvement supports their use.  However, clinical signs often recur despite therapy, which implies that bacteria are only one factor in feline upper respiratory disease.  If a 7 to 10 day course of antibiotics fails to resolve the disease, a thorough diagnostic work-up should be pursued before settling on a diagnosis of chronic rhinosinusitis. 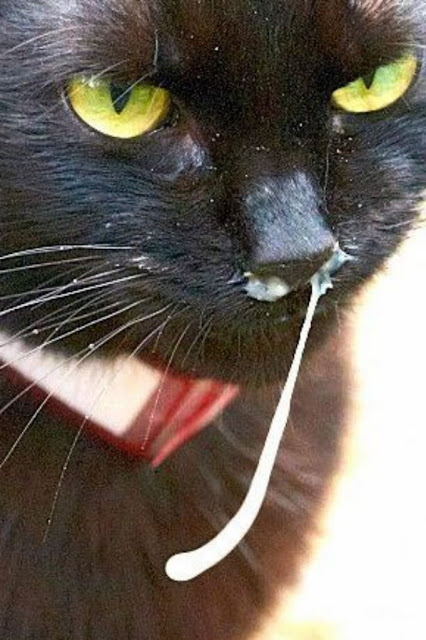 Although the most common cause of chronic rhinosinusitis is a prior, severe herpesvirus infection with subsequent damage to the nasal cavity, a diagnostic workup should be undertaken to rule out potentially treatable conditions, such as fungal infection, cancer, polyps, oronasal fistulas (a physical communication between the mouth and the nasal cavity) and foreign bodies.  This work-up may include bloodwork, a blood test to look for Cryptococcus (the most common fungus affecting the upper respiratory tract in cats), a thorough oral/dental examination, rhinoscopy (visualization of the inside of the nasal cavity and the back of the throat using a rhinoscope, an instrument that can be inserted directly into the nostrils), and a CT scan.  Radiographs may be helpful, but CT scans are preferred as the images they generate are thin, cross-sectional slices of the entire nasal cavity.  If rhinoscopy is performed, biopsy specimens should be submitted for histopathology to rule out cancer, and samples should be obtained for bacterial culture.  If the diagnostic tests rule out the treatable disorders mentioned above, then the diagnosis of idiopathic (i.e. no known cause) chronic rhinosinusitis is confirmed.  Now comes the hard part: trying to manage the disease and keep the cat comfortable.

Veterinarians often choose antibiotics to treat cats with upper respiratory disease, whether to treat a secondary bacterial infection that is concurrently infecting the cat, or to prevent one from developing. If bacterial culture grows a single organism that isn’t typically found as part of the normal nasal flora, then an antibiotic should be chosen based on the proven effectiveness against that organism, and it should be administered for 6 to 8 weeks.  If multiple organisms are grown on culture, the significance of this questionable, since there are many species of bacteria that normally inhabit the nasal cavity.

Antifungal drugs aren’t prescribed to treat chronic rhinosinusitis unless a fungal organism is proven to be present.  This is fairly uncommon occurrence.

If an allergic component is suspected (i.e. the symptoms seem to be somewhat seasonal), antihistamines may be considered.

Obviously, if a polyp is diagnosed via rhinoscopy, the polyp should be removed surgically.  If cancer is diagnosed, treatment options can be offered.  The prognosis varies considerably depending on the type and extent of the cancer.

Because the herpesvirus is considered to be the main culprit in initiating and perpetuating chronic rhinosinusitis in cats, treatment directed at the virus itself may be beneficial.  Administration of an intranasal herpesvirus and calicivirus vaccine two or three times a year may help to stimulate a local immune response within the nasal cavity.  Oral antiviral drugs, such as famciclovir, have been administered to cats with confirmed herpesvirus infections, with promising results.  The amino acid lysine has been used to reduce the frequency of herpesvirus reactivation in infected cats, however, recent controlled studies are casting doubt on the efficacy of lysine.

Anti-inflammatory drugs play a role in the treatment of chronically affected cats.  They reduce airway swelling, improving breathing and making the cat more comfortable.  Glucocorticoids are the most commonly prescribed drug for this, with prednisolone being the drug of choice.   Because these drugs can suppress the immune system, there is concern that the respiratory infection could potentially worsen if these drugs are used continuously over the long term.  Thus, glucocorticoids are best used intermittently.  For example, using prednisolone daily for a week, and then tapering the dosage to every other day for an additional week, would be a reasonable schedule.

Supportive care, such as maintaining hydration (to keep nasal secretions less viscous and easier to clear), humidifying the air (for example, isolating the cat in a bathroom while running a hot shower, allowing the cat to breathe in the steamy air), and ensuring proper nutrition (for example, using appetite stimulants such as mirtazapine in affected cats that are eating poorly) are helpful in keeping affected cats happy and comfortable.

Cats with chronic rhinosinusitis will never be cured, however, with medical management and supportive care, most cats can have their sneezing and nasal discharge kept to a minimum, and maintain an excellent quality of life.