Also known as “bobcat fever”, this hard to diagnose, hard to treat (and hard to pronounce) blood parasite spells bad news for cats.

In 1987, during my senior year at the University of Florida College of Veterinary Medicine, the teaching hospital began seeing a few puzzling cases of acutely ill cats.  All of these cats had fevers, were lethargic, and refused all food.  All of the cats were anemic, and most were jaundiced.  Sadly, despite aggressive treatment, all of the cats died within a week of hospitalization.  After much investigative work, a diagnosis was finally elucidated. These cats had succumbed to cytauxzoonosis, a parasitic blood disorder. 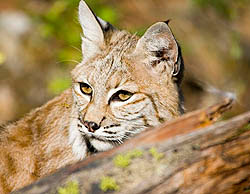 Cytauxzoonosis is a life-threatening blood disorder caused by the parasite Cytauxzoon (“site-awk-zo-an”) felis.  It used to be considered a rare disease, confined to a small geographic area.  The first reported case was in Missouri in 1976.  Since then, the geographic range has progressively expanded, and has now been confirmed in domestic cats in 17 states. (See Sidebar 1) The organism has been documented in bobcats from Pennsylvania and North Dakota, although no domestic cats have been reported with the disease there.  For many years, cytaxzoonosis was reported in North America and South America, but in recent years the infection has also been documented in Europe (in the south of Spain, in France, and in Italy.) 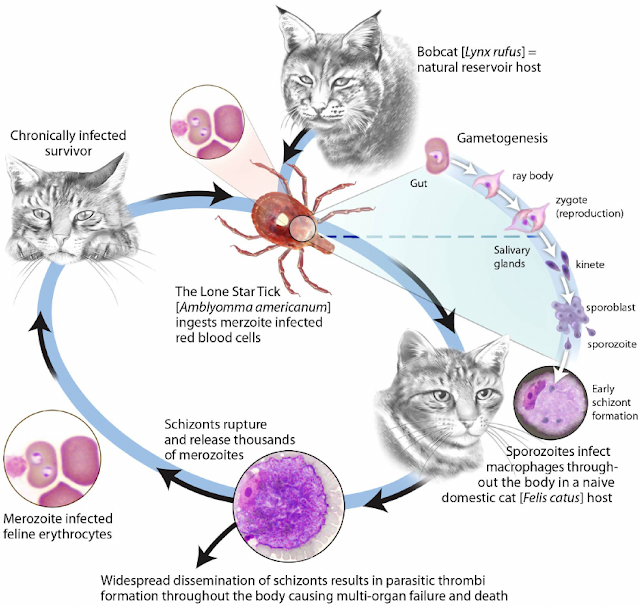 Cats acquire the illness through the bite of a tick, specifically the lone star tick.  The tick picks up the parasite from bobcats, which are the reservoir host.  Bobcats, when infected with Cytauxzoon felis, develop only mild clinical signs of illness.  The bobcats recover, and then become persistent carriers.  When a tick feeds on an infected bobcat, the tick acquires the pathogen. These ticks can bite and infect other bobcats, or they can bite a domestic cat instead, which leads to severe illness and often death.  All felids are susceptible to infection; cytauxzoonosis has never been described in a non-felid.

Because ticks transmit the disease, it should be no surprise that infection is far more likely in cats that go outdoors, especially in rural areas where tick contact is more common.  Cats of any age and either sex may be infected, although young adults are more commonly affected.  Most infections occur between April and September. 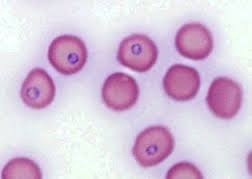 In order to diagnose it, you have to first have it on your list of possibilities.  In endemic areas, veterinarians must suspect cytauxzoonosis for any acutely ill cat with a high fever and outdoor exposure during the spring, summer, or early fall.   Of the routine tests we perform on sick cats – a complete blood count, serum chemistry panel, urinalysis, x-rays – the complete blood count is the most useful diagnostic test.  Microscopic identification of the parasites inside the red blood cell confirms the infection.  The parasite has been described as “signet ring” shaped.  Unfortunately, a major limitation of this test is that the parasite may not be visible inside the red blood cells early in the disease.  Evaluating a blood smear every day increases the chances of finding the parasite, but it may be several days before the parasite is identified.  Initially, only a few red blood cells may be parasitized.  As the disease progresses, however, up to 50% of the red cells may become infected.

There is a molecular test for that is very sensitive and specific for identifying infected cats, however, this test must be mailed out to diagnostic laboratory, and given the rapid progression of the disease, treatment should not be delayed while waiting for test results.

Because 90% of cats infected with Cytauxzoon felis die from the disease (most within a week of onset of clinical signs), it is imperative to begin treatment in any cat suspected of having the disease, even if a definite diagnosis hasn’t been made.  Many antiprotozoal drugs have been tried.  Recently, the administration of the antimalarial drug atovaquone, in combination with the antibiotic azithromycin, has shown the best results, with 60% of naturally infected cats surviving.  Treatment is administered for ten days.  Supportive care is essential during the treatment period, because these cats are critically ill.  Intravenous fluids, pain medication, anti-nausea drugs, and aggressive nutritional support are important aspects of treatment, as these supportive measures keep the cat alive while the antiprotozoal drugs and the cat’s own immune system do their work.  Severely anemic cats may require a blood transfusion.  Cats fortunate enough to recover from the illness are apparently immune from ever getting the disease again, however, they may continue to harbor the parasite in their red blood cells for months or years. 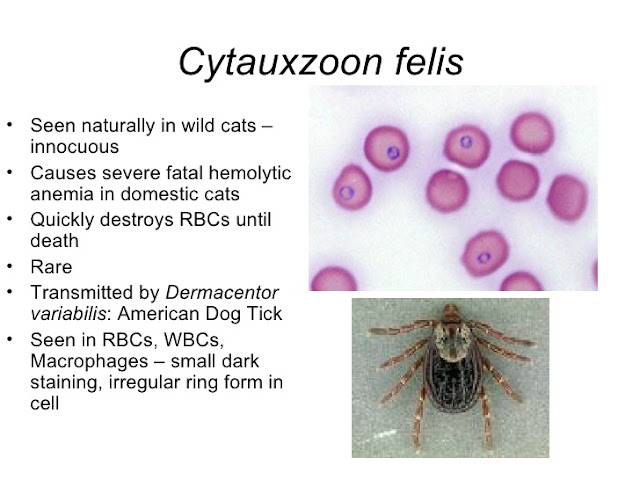 There is no vaccine for cytauxzoonosis, so prevention is based on tick control.  A recent study showed that a collar containing 10% imidacloprid/4.5% flumethrin (Seresto™, Bayer) was effective for prevention of Cytauxzoon felis transmission.  In that study, two groups of cats (with and without a collar) were exposed to ticks that were infected with the organism.  None of the cats wearing the collar contracted the disease, while 90% of cats without the collar got infected. Although infected cats cannot transmit the disorder to other cats through physical contact, cats that have recovered from the disease may become carriers, able to transmit the organism to ticks, and therefore indirectly to other cats. It goes without saying that the most sensible way to prevent infection is to keep cats completely indoors, thereby eliminating tick exposure.

An alternative to the atovaquone-azithromycin combination would be highly welcome, because atovaquone is expensive, tough to obtain, and difficult to administer. (Atovaquone is a thick, viscous, citrus-flavored liquid that must be given every 8 hours, and cats greatly resent being medicated with it.) Until a better treatment is discovered, however, the combination of these two drugs offers the best chance for survival and remains the treatment of choice for infected cats.

Sidebar 1: States where cytauxzoonosis has been reported in domestic cats