Heartworm Disease in Cats - Not for Dogs Only

Heartworm Disease in Cats - Not for Dogs Only

This potentially disastrous disorder in cats is 100% preventable, but this fact tends to be de-emphasized in cats. 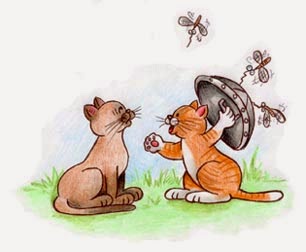 Heartworm disease is transmitted by mosquitoes.  The life cycle begins when a female mosquito feeds on a heartworm-infected dog and ingests blood that contains circulating microfilariae. (Think of microfilariae as “baby” heartworms.)  A few hours after entering the mosquito, the microfilariae transform into first stage larvae, known as L1.  These larvae then molt into stage L2, and then again into stage L3.  The L3 larvae are the infective stage.  The mosquito now bites a new host, and the L3 larvae are deposited into the skin.  The L3 larvae molt into stage L4.  The L4 larvae migrate into the fat and muscle under the skin over the next two months, ultimately undergoing a final molt to become a juvenile worm. The juvenile worm eventually enters a vein, where it is carried in the bloodstream to the heart and lungs.  Some juvenile worms may mature into adults.

In dogs, the adult worms can live in the heart and lungs for 5 to 7 years.  Cats, however, are not the natural host for heartworms, and their immune system mounts a vigorous response against the worms.  Because of this forceful immune response, in most cats, the juvenile worms die soon after arriving in the lungs.  In a small percentage of cats, however, a few juvenile worms survive and mature into adult worms.  In cats, adult worms have a shorter lifespan – only 2 to 4 years.

Many cats with HWD have no symptoms.  When signs are evident, they usually develop during two stages of the disease:  Stage 1 – arrival of the worms in the lungs, and Stage 2 – death of adult heartworms.

As noted above, when the juvenile worms arrive at the pulmonary arteries, the cat will mount a strong immune response against these worms.  This is stage 1, and may result in clinical signs such as coughing, labored breathing, weight loss, lethargy, poor appetite, and intermittent vomiting.  About 28% of cats, however, will show no clinical signs.  Because coughing and labored breathing are common signs of asthma, and x-ray findings in cats with heartworm disease can look similar to asthma, many cats are misdiagnosed with this disease.  Steroids, the primary treatment for asthma, will cause improvement of the clinical signs in cats with HWD, further supporting the misdiagnosis of asthma.  In most cats, juvenile worms never mature into adult worms, however, cats need not have mature adult worms to be affected. Pulmonary disease occurs in cats as a result of the aggressive immune response to juvenile worm infection. The inflammatory response in the lungs is more severe in the cat compared to dogs.

The discovery that heartworms do not need to reach maturity to cause pathology in cats is probably the most significant finding in our increased understanding of feline HWD.  Juvenile worms seem to be the main culprit.  In fact, if a juvenile worm matures into adulthood, the immune response actually quiets down and clinical signs may improve or resolve, allowing cats to seemingly tolerate their infections.  Adult heartworms living in the heart and lungs of a cat are anything but harmless, however.  As noted above, the lifespan of an adult heartworm in cats is 2 to 4 years.  When the adult worm finally dies, the previously suppressed immune response comes to an end and all hell breaks loose in the lungs.  The dead or dying worm causes a severe, intense inflammatory reaction.  In some instances, a sizable piece of worm may break off and cause a thromboembolism (obstruction of a vessel), leading to catastrophic lung injury and even sudden death.  In this way, the presence of even a small number of adult worms is potentially life threatening. Cats that survive the death of an adult heartworm may be left with permanent lung injury and chronic respiratory disease.  When it comes to feline HWD, the target organ is the lungs, not the heart.  This is the major difference between canine HWD and feline HWD. As such, the term heartworm-associated respiratory disease (HARD) has been adopted to describe the respiratory disease that results from heartworm infection in cats.

One of the most challenging aspects of feline HWD is trying to make the diagnosis.  There is no single test in cats can reliably detect heartworms at all stages.  Searching for microfilariae in the bloodstream is a very low yield test.  In order to have microfilariae in the bloodstream, cats need to have a mature male and female worm in the heart or lungs. In most cats, juvenile worms never mature into adults, and if they do, there may only be one or two worms, so the infections are often single-sex.  In those rare cases where microfilariae are produced, the immune system eliminates them quickly.  All of these factors make detection of microfilariae a poor test for diagnosing feline HWD.

The lungs of a heartworm-infected cat will look abnormal on x-rays, compared to those of normal cats, however, the findings are not unique for feline HWD.  Only 53% of heartworm-infected have x-ray findings suggestive of HWD, so x-rays are of limited sensitivity for making the diagnosis.

Echocardiography (cardiac ultrasound) can detect an adult worm(s) in the pulmonary arteries of the cat if performed by a skilled ultrasonographer.  However, most cats with HWD do not harbor adult worms, thus a negative finding on cardiac ultrasound does not rule out infection.

Serology is the most common test used to diagnose feline HWD, however, there is still debate in the veterinary community about the accuracy of these tests, and there is concern about their limitations.  Briefly, there are two types of tests that are performed – the antibody test, and the antigen test.  In general, most veterinarians, if they have a suspicion that the cat has HWD, will perform both tests in sequence or in combination.  If done in sequence, the antibody test is usually performed first.  A negative antibody reduces our suspicion for heartworm infection (although 50% of cats experimentally infected with heartworms had a negative antibody test).  A positive antibody test means that exposure to heartworms has likely occurred, and the antigen test should now be performed.  A positive antigen test means the cat is almost certainly infected with adult worms.   A diagnostic dilemma occurs when the cat is antibody positive, but antigen negative.  This scenario suggests exposure, but cannot confirm infection. However, because even transient heartworm infection can produce signs of disease, it may be beneficial to perform additional tests, such as x-rays and/or cardiac ultrasound in any cat with a positive antibody test and respiratory signs such as coughing or wheezing, in an attempt to confirm a diagnosis of HWD. The bottom line about laboratory tests for diagnosing feline HWD is that a positive test is quite reliable; a negative test leaves you unsure.  Veterinarians need to use a combination of test results to determine the likelihood of HWD.

Treatment of feline HWD is dramatically different from that for dogs, and poses some challenges.  Most cats with HWD do not have microfilariae circulating in the bloodstream, so it is not necessary to give medications that kill microfilariae.  In dogs, killing the adult worms is achieved using drugs that contain arsenic.   Arsenical compounds are very toxic in cats, however, and attempts to give cats these drugs in have been met with mixed (mostly poor) results.  Most people feel that the mortality rate in cats that receive these drugs is unacceptable, thus they are rarely used.  Surgical removal of the worms has been performed at veterinary referral and specialty centers, but this procedure also has a significant mortality rate and is not widely available.  As technology and techniques improve, this procedure may hold promise for the future.  Instead, most cats with HWD are treated symptomatically.  Cats with respiratory signs are treated with short-term corticosteroid therapy.  If signs recur, steroids should be reinstituted, and then tapered to the lowest dose that controls the signs.  Cats who experience a thromboembolus after the death of an adult worm usually become acutely (often critically) ill and may require hospitalization in an oxygen cage, intravenous corticosteroids, and bronchodilators (drugs that open the air passages).  Studies have shown that 10% to 20% of cats with adult heartworm infections die as a result of complications from a dead or dying heartworm.  Owners of cats with confirmed adult heartworm infection should be told of this risk and instructed to pursue emergency veterinary care if any signs of respiratory distress develop.

Cats that are diagnosed with HWD but have no clinical signs at all may be given low doses of aspirin to reduce inflammation and reduce the chances of a thromboembolus, although there is no universal consensus regarding the use of aspirin and the decision remains controversial.  Definitive evidence supporting the use of aspirin is lacking.  Despite this, because treatment options in cats are limited and because the dosage recommended is harmless and inexpensive, many veterinarians continue to advocate the use of aspirin for cats with HWD.  If respiratory signs develop in a previously asymptomatic cat and corticosteroids become necessary, aspirin therapy should be discontinued; aspirin and corticosteroids should not be given concurrently.

Heartworm disease is completely preventable in cats, however, since cats are not the natural hosts for heartworms and because the incidence of disease is low, many veterinarians don’t prescribe preventatives, and many cat owners don’t ask for them. In fact, only 5% of cats in the U.S. receive heartworm preventative medication. Many cat owners (and veterinarians) mistakenly believe that because a cat lives indoors, it cannot get heartworm disease. Cats who roam outdoors are at increased risk of heartworm disease because of increased exposure to mosquitoes, however, over 25% of heartworm-infected cats are reported by their owners to be housed totally indoors.

Because diagnosis and treatment are problematic and the consequences of infection are potentially disastrous, if a cat resides in a region where heartworm preventatives are recommended for dogs, they should be offered to cat owners too.  There are currently four F.D.A. approved feline heartworm preventatives in cats.  All of these products control multiple parasites in addition to heartworms. 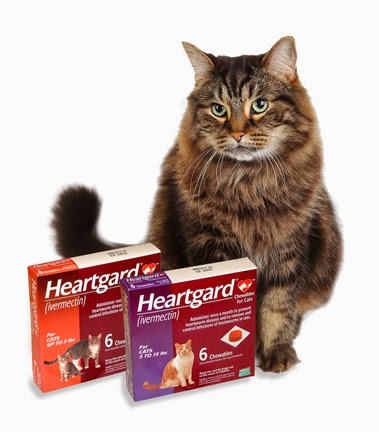