Reader Question: Can Cats Be Fed a Vegan Diet? 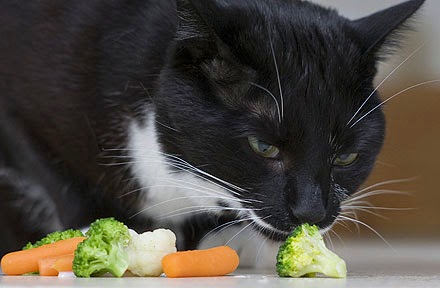 Don’t get me started on vegan cats and vegan cat owners forcing their cats to be vegan.

Forgive me if some of the terminology and physiology seems beyond the scope of this blog, but it’s important that I make clear ALL of the reasons why vegan diets for cats cannot and should not be done.

Cats are strict carnivores and need to consume animal tissue to avoid nutritional deficiencies.  There are specific, essential nutrients that are limited or scarce in plant material.


For example, cats require dietary taurine.  This is an important amino acid which, if fed in inadequate amounts, can lead to cardiac and vision problems.  If someone is crazy enough to try to formulate a vegan diet for their cat, they better supplement the diet with taurine.

Cats cannot synthesize sufficient niacin from the amino acid tryptophan, and plant material tends to have relatively low levels of this vitamin, so supplementation is necessary.

Cobalamin (vitamin B12) is scarce in plants.  Any vegan diet will require supplementation.

Cats cannot synthesize retinol (vitamin A) from beta-carotene, which is the precursor of vitamin A. Thus, preformed retinol must be provided in the diet.  Cats also require a dietary source of vitamin D, and plant-based materials are a poor source of vitamin D.  It can be added, but owners should make sure that the form that they add it in the proper form, i.e. cholecalciferol, which is used much more efficiently than ergocalciferol.

Arginine is an essential amino acid for cats.  It plays an important role in the urea cycle.  Trust me, this is super important. If cats do not get enough arginine in their diet, the ammonia level in their blood will elevate, and cats will experience neurological problems.  Arginine is found in low amounts in plant-based diets.

Cats require dietary lysine, another important amino acid.  If grans are the only major source of protein fed to cats, lysine levels will be deficient.

To those companies who say that they can manufacture a vegan diet that can meet 100% of a cat’s nutritional needs, I say, “Prove it.”  What does “proof” consist of?  Two things: the diet has to meet the minimum nutrient amounts cited in the Association of American Feed Control Officials (AAFCO) Cat Food Nutrient Profiles, and it has to be used in actual feeding trials in which cats are fed these diets for years and are shown to not result in deficiencies in cats.  I’m still waiting.

Cats are not omnivores. They are true carnivores, and animal-derived protein is MAJORLY important for normal metabolism.  It is a supreme act of hubris to think that we humans can understand feline physiology well enough to synthesize an entirely new nutritional lifestyle for cats.  Humans are free to choose vegetarianism or veganism, but please, leave your cat out of it.