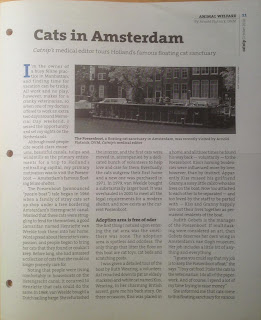 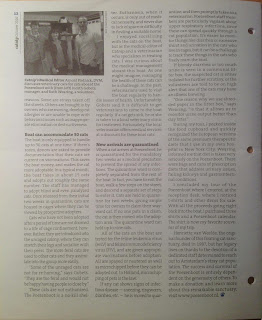 I recently had the pleasure to take a trip to my favorite international city, Amsterdam.  I first visited this wonderful city in 1998.  Although I have traveled to most European countries, I hadn’t had a chance to return to Amsterdam until 2011.  At that time, I was fortunate to discover the Poezenboot, a cat shelter/sanctuary permanently docked in the Singel canal.  I visited the boat and met Ruth and Judith, two staff members who were super-nice and very informative.  They gave me a detailed tour and told me some of the history of the Poezenboot.  I wrote an article about the experience for Catnip magazine, and for this blog.


On my recent trip to Amsterdam, I stayed with a friend whose new apartment just happens to be right around the corner from the Poezenboot.   Naturally, I went to visit.   On the day I went, the Poezenboot’s hours of operation were from 1:00 to 3:00.   I arrived at 12:30.  Sitting outside, on the sidewalk adjacent to the stairs leading down to the boat, were four people who I assumed were employees.  I recognized Ruth immediately.  Before I could re-introduce myself, Ruth said that they don’t open until 1:00.   “Yes”, she said, giving me a look that said, “Do I know you?”


“I don’t know if you remember that about two years ago, I visited and wrote an article about the Poezenboot for a magazine…”


“Oh yes!  Of course!  You’re the doctor!” she exclaimed.  I told her that I was visiting Amsterdam and that I wanted to stop by and say hi and see the kitties again.  I asked if Judith still worked there.  “Yes, Judith is inside.  Come on in!”


I descended the stairs into the front reception area, where Judith was working.  “Judith, remember the doctor who visited and wrote about us two years ago?”, said Ruth. “He’s back for a visit!”  Judith instantly recognized me and greeted me warmly.  After a brief chat, she led me through the door to the main area, where I found about a dozen cats milling about.


These were the “resident cats” that lived on the boat, and weren’t necessarily being advertised as being up for adoption, as many of them were comfortable with the other cats, but not that personable with people.  In the cages against the wall were the ones for adoption.  In the quarantine room were a bunch of kittens being readied (tested, vaccinated) before being placed in the adoption room.  Naturally, I mingled with the kitties, both caged and free-roaming.


Judith then made me a nice offer: it wasn’t quite feeding  time yet, but Judith  agreed to feed the cats early, and she gave me the honor of actually putting the food in the bowls and putting the bowls on the floor.  This allowed Brad to take a video of me feeding the kitties, and to take many other fun photographs of some fine-looking felines.

Although the boat was brimming with cute kitties, the most striking had to be Sinatra.  One look at those blue eyes and it’s obvious how he earned the moniker.


After a little more cavorting with the kitties and staff, it was time to leave.  As I was making my way through the reception area, the two people who were sitting on the sidewalk chairs when I arrived had just entered the reception area, as it had just turned 1:00 and the Poezenboot was open for business.  I thought they were employees.  It turns out that they were vacationing, from the U.S., and they decided to pop by and visit. Their inspiration for the visit was music to my ears.


“You should know, we’re visiting the Poezenboot because of that Catnip article you spoke about before”, said the woman to me.  She had overheard me discussing the article with Ruth when I approached the boat.  “We’re from Massachusetts, and we read the article you wrote for Catnip in our veterinarian’s waiting room.  We said that if we ever visit Amsterdam, we need to check out the Poezenboot.”


Writers always wonder if the articles we write have much of an impact on their audience.  We hope so, but without much feedback, we’re never really sure.  It was great to hear that my article did have a direct, and doubly great to witness it firsthand. I’m sure that the visitors made a much-needed donation while they were visiting, as the Poezenboot operates on a shoestring budget.


Enjoy the photos. Hopefully others will be inspired to visit, and make a donation after reading about my visits.  It’s really a fun, unconventional thing to do when visiting Amsterdam, and will delight all cat lovers.
De Poezenboot 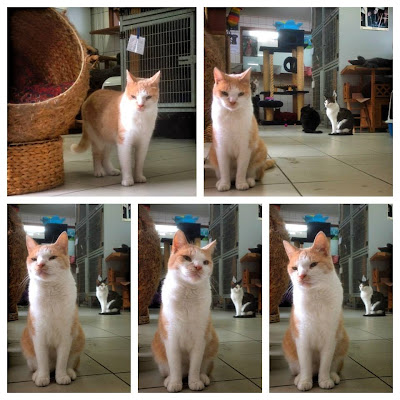