So, Lilly came back two weeks later.  Check it out!  The owner reported that the long-acting steroid injection seemed to work immediately, and the lip ulcer started getting smaller.  The foot responded pretty well, too, she said, with the lateral lesion resolving, and the larger medial lesion shrinking noticeably.  As you can see, the erosion on the upper lip is about 75% improved: 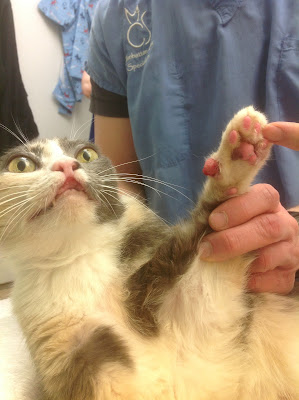 The cat is almost looking like a normal kitty!  The lateral lesion on the foot is indeed gone, but the medial lesion is still present and is a little raw looking.  The owner said that it started to resolve, but about three days ago the cat started licking at it, and it started to appear worse, unfortunately.

I gave a second steroid injection today.  The textbooks say that you can give up to three injections, as often as every two weeks.  I’m reluctant to do that.  I gave a second injection today, and in three weeks I’ll have her back for a recheck, at which time I hope the condition is totally resolved.  I will do some bloodwork at that time, to make sure that there’s been no adverse effects from the injection, like diabetes.  Right now, the cat is fine.  Eating and drinking normally, no coughing, sneezing, vomiting, diarrhea, etc.  She feels great.  If the condition is totally resolved in three weeks, I will probably start the cat on 5 mg of prednisolone every other day, to maintain the skin..  If the skin stays normal for a few months, I will probably try to wean the cat off of all medication.  Check back in three weeks to see how things turn out!
Labels: A week in the life allergies cats eosinophilic granuloma complex fleas mouth patients skin disorder ulcers Veterinarian Veterinary Medicine