Recently, I saw a pretty dramatic case.   A feline patient came in kind of looking like those people in that old Twilight Zone episode.  You know the one:


It was an 12 year old female cat named Lilly with a common skin condition called the eosinophilic granuloma complex (EGC). The EGC isn’t one disorder, per se.  It is a collection of skin disorders in cats that are often grouped together, because they have the same basic underlying characteristic – infiltration of the skin by eosinophils, a type of inflammatory blood cell that is commonly associated with allergic or parasitic diseases.

The cause of EGC is not known, however, an underlying allergy such as flea allergy, atopy (allergy to inhaled environmental allergens) or food allergy has long been suspected.  A genetic predisposition to EGC has also been postulated. In some cases, EGC are triggered by an allergic response to mosquito bites.  Most of the time the underlying allergen is never discovered. Any age cat may be affected, but it is most common in young to middle aged cats. In some cats, more than one type of eosinophilic skin disease can occur at the same time.

The indolent ulcer (sometimes referred to as “rodent ulcer”, although I’m not sure why) commonly appears as an erosion on the margin of an upper lip.  Both lips can be affected, but in most cases, it is unilateral.  They appear reddish brown and are well-demarcated and hairless. Sometimes, they are painful and affect a cat’s willingness to eat. Most of the cases I’ve seen are mild unilateral cases.  Well, check out Lilly's upper lip. This is severe (I mean SEVERE) bilateral involvement. 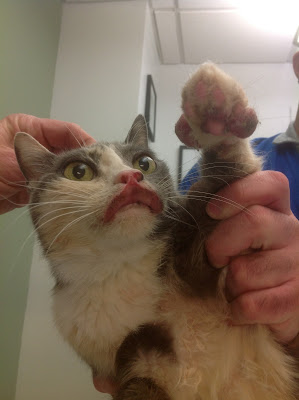 The entire upper lip was gone, basically. It was replaced by a severe ulcerated infiltrate of inflammatory cells.  Even the nose is a little bit affected!  The margins of the lips, on the side are also affected, but you can’t see it in the photo.
The second manifestation is the eosinophilic plaque. Eosinophilic plaques can appear anywhere on the skin, but they are most commonly found on the abdomen and the inside thighs.  They may be singular, or there may be multiple lesions. They appear raised, red, moist, and well-circumscribed.  They are very itchy, and cats lick them constantly.  Usually I see these on the abdomen or on the inside of the thigh.  This cat had two of them on his left front foot, as you can see. The third way that the EGC can present is with eosinophilic granulomas. These are sometimes called linear granulomas or collagenolytic granulomas.  They often occur down the back of the thigh, on the face, in the mouth, especially on the tongue or the roof of the mouth. When they occur on the skin, they tend to be yellow or pinkish in color, raised, hairless, with a characteristic linear configuration. When they occur on the face or in the mouth, they tend to appear more nodular.  One manifestation is to cause the lower lip to swell, giving the appearance of a “fat lip”. Poor Lilly had them all over her tongue and the roof of her mouth.  Her mouth was sensitive and I couldn’t get a good photo without upsetting her.

Diagnosis of eosinophilic skin disorders is usually made based upon the visual appearance, however, sometimes a biopsy is necessary to rule out disorders with similar appearances.  No biopsy was needed here.  This was classic.

The optimal treatment would be avoidance of the offending allergen.  Strict flea control is essential, since flea allergy may be a potential trigger for EGC. A feeding trial with a hypoallergenic diet may be needed to identify an underlying food allergy.  In most cases, the allergen cannot be identified, and administration of immunosuppressive drugs is necessary to control the clinical signs.  The most commonly prescribed drugs for this condition are corticosteroids. These drugs can be given in pill form, or as a long-acting injection. Lilly was currently receiving the corticosteroid dexamethasone.  According to the owner, it hadn’t really made much of a difference.  Recently, the immunosuppressive drug cyclosporine has been shown to be effective in controlling this condition.  This is good news for cats that cannot or should not be given corticosteroids (for example, diabetic cats and cats with heart disease).

Lilly’s lesions looked like they were a little infected, so I treated her with antibiotics, in the form of a long-acting injection of Convenia, an antibiotic that achieves effective blood levels which lasts 2 weeks.  Convenia is great because it is usually pretty effective for skin infections, and you don’t have to administer it orally, which would have been difficult for this cat, given her tender mouth.

As for steroid treatment, I’m not a big fan of steroid injections, due to the potential for adverse effects.  I prefer to give oral steroids, however, orally medicating Lily would be difficult, and besides, the lack of response to her first trial with oral steroids was discouraging.  So, after discussing the pros and cons of long-acting steroid injections, the owner consented to treatment.  I gave Lilly 20 mg of methylprednisolone.

In two weeks I’ll recheck her to give the second Convenia injection.  I’ll take a photo and share it with you. Two weeks after that, I’ll check her again, and will give a second steroid shot if warranted.  Sometimes it can take two or even three injections.  Hopefully, she’ll need no more than two.


The prognosis for EGC varies, with young cats often having a better prognosis than older cats.  Stay tuned!