Pancreatitis in Cats - A mysterious disease that remains tricky to diagnose 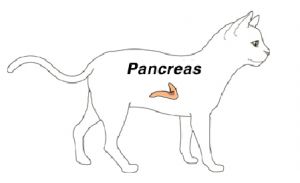 Pancreatitis (inflammation of the pancreas) is a common gastrointestinal disorder in dogs and cats.  In the past, the incidence of pancreatitis in cats was thought to be low, but recent studies suggest the contrary. The true incidence of the disease is unknown, however, as many dogs and cats have mild disease and are not presented to a veterinarian.  Unfortunately, many cases of pancreatitis in cats go undiagnosed due to the nonspecific, vague clinical signs, and the lack of a highly sensitive and specific diagnostic test.  However, a new test has become available that may improve our ability to achieve a diagnosis of this elusive disease in cats.

The pancreas serves a dual role in animals.  It is an “endocrine” organ – it  produces hormones that regulate body functions, the most well-known of these hormones being insulin, which helps regulate blood sugar levels.  It is also an “exocrine” organ – it produces enzymes which are involved in digestion of food.   Many things can go wrong with the pancreas.  The endocrine portion can malfunction in terms of hormone production.  The most common example would be diabetes, in which the pancreas produces insufficient quantities of insulin.  Disorders involving the exocrine portion of the pancreas are also common.  The pancreas can fail to produce sufficient digestive enzymes, causing a condition called exocrine pancreatic insufficiency.  The pancreas can also become inflamed, resulting in the digestive enzymes being released into the pancreas itself rather than into the intestinal tract, a condition we generally term “pancreatitis”. No one is sure what causes pancreatitis in cats.  Trauma, infection, parasitism, and idiosyncratic reactions to certain drugs are potential causes of pancreatitis, however, the vast majority of cases (> 90%) cannot be linked to any one specific cause.  Siamese cats seem to be at greater risk than other cats, which suggest a possible genetic component to the disorder. 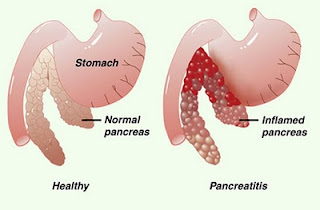 Clinical signs of feline pancreatitis are quite variable, and usually differ from signs seen in dogs.  Dogs often vomit and have signs of abdominal pain.  Cats, however, may present with poor or absent appetite, lethargy, weight loss, dehydration, and diarrhea.  Vomiting and abdominal pain are not common clinical findings in cats affected with pancreatitis; only about 1/3 of cats with pancreatitis will vomit, and only ¼ show abdominal pain. Unfortunately for cats, pancreatitis is usually not a one-time occurrence.  Instead, it tends to be a chronic, intermittent problem.  Dogs, by comparison, are more likely to experience acute pancreatitis, a short-term inflammatory condition that may be completely reversible after the inciting cause has been eliminated. In some instances of feline pancreatitis, things can really get out of control, and the pancreatitis can trigger damage to other areas of the body, leading to respiratory failure, steatitis (painful inflammation of fatty tissue), and other damage, often with devastating consequences.
For years, veterinarians have grappled with diagnostic tests for pancreatitis.  The disorder cannot be diagnosed based on historical or clinical signs alone, because the clinical signs (lethargy, inappetance, weight loss, vomiting, diarrhea) mimic many other diseases in cats and are not specific for pancreatitis. Further complicating matters, pancreatitis in cats often develops concurrently with other diseases, such as hepatic lipidosis (fatty liver disease), cholangtiohepatitis (inflammation of the liver and bile ducts), and inflammatory bowel disease.  (In fact, the concurrent occurrence of these three disorders in a cat has been termed “feline triad disease” or “triaditis”).
As for diagnostic testing, it has been suggested that two enzymes found in serum, amylase and lipase, were good indicators of pancreatic inflammation if they were elevated, but recent comparisons have shown that almost 50% of dogs with elevated serum amylase or lipase levels did not have pancreatitis.  In cats, the situation is even worse.  Serum amylase and lipase levels have no clinical usefulness at all for the diagnosis of feline pancreatitis.  This is mostly because other organs in the body produce these enzymes, such as the stomach and small intestine.  Also, these enzymes are excreted by the kidney, and the presence of concurrent kidney disease (which is fairly common in cats) can falsely elevate the serum amylase and lipase levels. Occasionally, an elevated white blood cell count and elevated liver enzymes may be present, but these findings are also not specific for pancreatic disease per se, and in fact may mislead clinicians into thinking that the primary problem is the liver, rather than the pancreas.
X-ray findings are subjective and may not be apparent.  A few cases show an enlarged liver and presence of fluid in the abdomen, but in most instances, radiographic findings are normal.  Ultrasound is a helpful tool for diagnosing pancreatitis.  In the past, it was suggested that if you could find the pancreas during an abdominal ultrasound, it had to be swollen and therefore abnormal.  This is not true.  A well-trained, skillful ultrasonographer using today’s state-of-the-art equipment should be able to identify the pancreas nearly every time the abdomen is ultrasounded.  Once identified, the ultrasonographer can then determine if the pancreas is of normal size, shape and density, or if it looks abnormal or diseased.  In feline pancreatitis, however, ultrasound detects pancreatitis only 11 – 35% of the time that it is present.
Several years ago, a test was developed to assess how well the pancreas was producing digestive enzymes.  The test, called the serum feline trypsin-like immunoreactivity (fTLI) test, was very accurate for diagnosing exocrine pancreatic insufficiency, the condition in cats described above whereby the pancreas produces inadequate digestive enzymes.  A low level confirmed that the pancreas was under-producing these enzymes.  Not long after the test became available, it was noted that cats with pancreatic inflammation would often have an elevated fTLI test.  Over the last few years, there’s been some controversy regarding how accurate the test is in terms of diagnosis; some clinicians sing its praises, while others remain highly skeptical.  Despite its flaws, the serum fTLI test is still the most sensitive diagnostic tool currently available for pancreatitis in cats.
Recently, a new test for measuring serum pancreatic lipase immunoreactivity (PLI) has become validated for dogs and cats.  Serum canine PLI (cPLI) has been shown to be highly sensitive for detecting canine pancreatitis.  Serum feline pancreatitis (fPLI) is still being evaluated, and preliminary studies look promising.  In some cases of experimental pancreatitis, as well as a few naturally occurring cases, serum fPLI has been elevated.  It is believed that with further refinement, the fPLI test may prove to be even more sensitive than the fTLI test.  At this time, however, there is no single diagnostic test, other than biopsy, that is completely reliable in diagnosing feline pancreatitis.
Treatment of pancreatitis in cats can be equally as frustrating as the diagnostic process.  Supportive care is the mainstay of therapy.  Efforts should be made to try to identify and eliminate any inciting cause.  Intravenous fluid therapy in crucial, and blood or plasma transfusions may be necessary.  Resting the pancreas by prohibiting feeding for a few days may be warranted.  Medication to control pain and vomiting may be necessary, and antibiotics may be needed if an infectious cause is suspected.
Sidebar:  Clinical signs in cats with severe pancreatitis
Labels: cats endocrine gastrointestinal Health pancreatitis