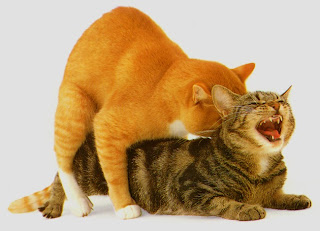 As a cat vet, I am a big supporter of the Winn Feline Foundation, a non-profit organization that funds feline veterinary research. Every week or two, I receive an e-mail containing a summary of a journal article that deals with some aspect of feline medicine. Today's summary is entitled Suppression of Estrus in Cats. The full title of the article they've summarized is "Suppression of estrus in cats with melatonin implants". It appeared in the journal Theriogenology. (Theriogenology is the scientific term for the study of reproduction). I've cut and pasted the summary, below:

Cat overpopulation is a large problem in much of the world. Surgical contraception has been the method of choice, but is not feasible in some countries because of economic limitations, and lack of organized programs. Control of reproduction is needed, but little work has been done in non-surgical feline contraception. Cats are long-day breeders; melatonin may signal the feline ovary, and exogenous melatonin may mimic shortening daylight. This study examined the usefulness and safety of heat, or estrus, suppression in cats with melatonin implants. Melatonin implants were given to nine queens, while five received a placebo, during the interestrus period. This was followed by a second implant during estrus. Vaginal cytology, behavior, and reproductive status were examined. The interestrus period was extended by two to four months in the queens receiving melatonin. Once suppression waned, and estrus occurred, pregnancy rates were not affected. The authors concluded that subcutaneous melatonin implants effectively, reversibly, and safely suppressed estrus in queens for 2 to 4 months. Additional studies are needed to suppress estrus in queens for the entire breeding season.

ff, the cats came into heat, and those that got bred became pregnant at the same rate as if they had never been given anything. I think this is exciting news. It shows that melatonin can suppress heat. It remains to be seen whether the dose of melatonin can be adjusted so that perhaps one injection can suppress heat for the entire breeding season. If the melatonin proves to be less expensive than spaying, the melatonin injections might at least provide an alternative way to prevent pregnancy in cats for those folks who cannot afford to get their cat spayed. It would be interesting to know if oral melatonin can suppress heat. If so, it could be put in food that could be fed to feral cats to prevent them from coming into heat. Exciting stuff!

The November issue of Veterinary Economics is going to have an article about diabetes in cats. The article, entitled "I Have to Stick My Cat with a Needle?" contains extensive quotes from me. I have a lot of diabetic cats in my practice (and my own cat, Crispy, is diabetic), so I'm very familiar with the topic. The article will also contain a client education handout entitled "Your cat has diabetes - now what?" The information in the handout is modified from the client handout I use in my practice. I cannot share this with you just yet, because the handout is not finished, and the editor asked me not to share it outside of my office. But stay tuned. As soon as it becomes available, I'll show it to y'all.