Searching for Kitties in Vienna

Well, a (minor) disaster is upon us here in Vienna. We arrived at our hotel room, and we both realized that neither of us were carrying the little Diesel bag containing both our Rick Steves’ Eastern Europe travel guide and our Knopf Map Guide of Vienna! Our whole itinerary was heavily dependent on the maps and descriptions in those books. Groan. Oh well, it certainly could have been worse. If the camera, the memory cards, passports, cellphones or money were in the bag, it would have been disastrous. Not having these books makes navigating the city a bit more challenging, but certainly not impossible.


So far, we’re impressed with the city. It’s much more ethnically diverse than Budapest, and it’s very cosmopolitan. Being real cityfolk, we really feel the difference right away.
Our first stop was the famous Opera house. The metro system (called the U-Bahn) was a breeze to figure out, and in five minutes, we were standing in front of this amazing building. We hopped on the number 2 tram outside the Opera house, and took a 30 minute ride around the circular Ringstrasse, viewing many of the major sights in the city. 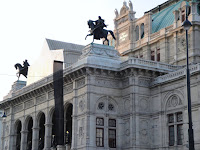 The tram left us back where we started – in front of the Opera house – and we meandered toward Albertinaplatz, the plaza housing the beautiful Albertina Museum, where we admired the Monument Against War and Fascism, a powerful, thought-provoking four-part statue. I then found, on my crappy hotel map, the park (Burggarten) in which the restaurant Café Palmenhaus was located. The restaurant was stunningly beautiful, with palm trees and foliage inside as if it were a solarium, and tables on an outside terrace overlooking the park. Dinner was wonderful. Afterward, we didn’t do much else. Sunday is a quiet night in Vienna, according to the hotel receptionist. Most stores are closed, and besides, we have a busy day scheduled for tomorrow – the Schonbrunn Palace, followed by a walking tour of all the major sites in downtown Vienna. I’ve seen many dogs so far in Vienna, in parks, on the U-bahn (apparently, if they’re muzzled, they’re allowed!), and strolling along the sidewalks with their owners, but still no cats.