Cats are uniquely susceptible to a variety of viral villains, and one of the most challenging culprits is the virus that causes feline panleukopenia.

Panleukopenia (pronounced “pan-luke-oh-pee-nee-a”) is a highly contagious viral disease caused by a parvovirus.  Most people mistakenly consider parvovirus to be a dog disease only, but this not the case.  All felids, as well as raccoons, mink, and foxes are also susceptible. 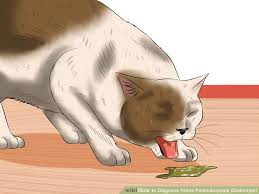 The symptoms of panleukopenia are similar to those seen in dogs with parvovirus: fever, vomiting, diarrhea (possibly bloody), and poor appetite.  The symptoms are explained by the propensity of the virus to attack cells in the body that are rapidly dividing, namely cells of the digestive system and the bone marrow.  Virally induced damage to the intestinal tract leads to vomiting, diarrhea, and poor appetite.  Infection of the bone marrow with this virus impairs the ability of the marrow to produce white blood cells, leading to a low white blood cell count.  This explains the name of the disorder: in Latin, “pan” means all; “leuko” means white, and “penia” means “decreased amount”. Cats with panleukopenia have low numbers of all white blood cell types.  Panleukopenia is sometimes referred to as “feline distemper”, however, this is a misnomer.  It probably started because some of the symptoms of panleukopenia are similar to those of dogs with distemper.  Veterinarians don’t like to use that term because the virus that causes canine distemper is a completely different virus that is in no way related to the parvovirus that causes feline panleukopenia. 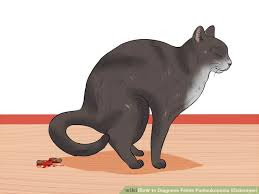 The panleukopenia virus is most commonly transmitted when a vulnerable cat comes into contact with the feces, urine, blood, or nasal secretions of an infected cat.  Contaminated objects, such as bedding, cages, shoes, clothing, hands, and food bowls can harbor and transmit the virus.   It can also be transmitted from the mother to the developing kittens in her uterus.

Although the panleukopenia virus can infect cats at any age, kittens aged three to five months are particularly susceptible.  These poor kittens often experience severe clinical signs, such as profuse diarrhea, frequent vomiting, abdominal pain, high fevers, and marked lethargy.  Owners of affected cats often report finding their cats with their heads hanging over their water dish. With their small body size, kittens may rapidly become dehydrated.  There are no medications that kill the virus itself.  Treatment consists of aggressive supportive care with intravenous fluids, antibiotics, anti-nausea drugs, and nutritional sustenance.  Severely affected kittens or cat may require plasma or blood transfusions. The prognosis for recovery is guarded.  The mortality rates for panleukopenia are high, and most kittens less than eight weeks old succumb to the disease.  Older kittens, if they survive the first 48 hours of hospitalization, may pull through.  Kittens that contract the virus in utero, if they survive, may be born with a brain disorder called cerebellar hypoplasia.   The cerebellum is responsible for balance and coordination.  Because these kittens have an underdeveloped cerebellum, they go through life a little clumsy and ungraceful, but are otherwise fine.  Due to the contagious nature of the disease, hospitalized cats should be strictly isolated from other cats. Cats that recover from panleukopenia are believed to be immune from the disease for the remainder of their lives.

A presumptive diagnosis is usually made based on the age and vaccination status of the cat and the clinical symptoms.  Because panleukopenia is caused by a parvovirus, the rapid in-house parvovirus tests for dogs will also detect the virus in feline feces.  Although the test has some limitations in cats, it does allow immediate, in-house detection of the virus in just a few minutes, confirming the diagnosis.

The best way to treat any problem is to prevent it from occurring in the first place, and this certainly holds true for feline viral diseases.  Fortunately, vaccination offers safe and effective protection.  Initially, kittens receive immunity from the antibodies in the mother’s milk.  This immunity is temporary, however, lasting only a few weeks. As the kittens’ antibody level drops, they become very vulnerable to infection. To best protect kittens, they should be vaccinated against the virus.  The initial vaccine is given between six and eight weeks of age, and then every two to four weeks thereafter until about 16 weeks of age.  Panleukopenia can be a major cause of mortality in cats in shelters and rescue homes.  With rare exceptions, all kittens and cats in a cattery or shelter over 6 weeks of age should be vaccinated, regardless of their physical condition and pregnancy status.

The parvovirus that causes panleukopenia in cats is highly resistant to some disinfectants and may survive in the environment for several months.  This has significant implications in shelters and catteries trying to limit the spread of the disease.  Disinfectants containing sodium hypochlorite (bleach) have been shown to be effective in killing the virus in the environment.