When it comes to glandular problems in the cat, the thyroid gets all the glory.   Hyperthyroidism in the most common feline endocrine disorder, and every cat-centric publication regularly features articles about it.  Adjacent to the thyroid gland, however, are four small glands called the parathyroid glands.  These little glands are immensely important in finely regulating the blood calcium level. 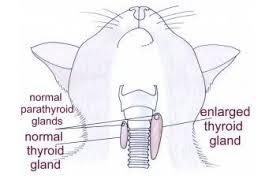 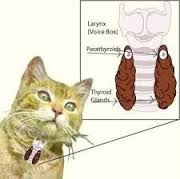 The end result is the restoration of a normal calcium level.  When the calcium level returns to normal, it signals to the parathyroids “mission accomplished”, and tells them to reduce PTH secretion. 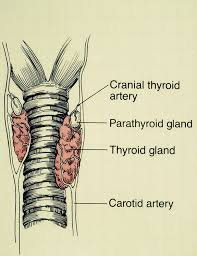 Primary hyperparathyroidism occurs as a result of one of the parathyroid glands secreting excessive amounts of PTH on its own.  The cause of the excessive secretion is usually due to a benign tumor of one of the glands, called an adenoma, although in rare instances, the tumor is a malignant carcinoma.   Affected cats tend to be older, the age range in reported cases being somewhere between 8 and 15 years of age. Clinical signs tend to be non-specific and include lethargy, poor appetite, and vomiting.   Physical examination of the cat tends to be unremarkable, the only consistent finding is the detection of the enlarged parathyroid gland in the neck in about 50% of the cases.  Routine blood tests show an elevated calcium level.  Because PTH causes the kidneys to excrete phosphorus, some cats with primary hyperparathyroidism will have low serum phosphorus levels. In some cats, the elevated calcium levels results in the formation of calcium oxalate stones in the bladder, and some cats will have sign related to this, such as increased frequency of urination, straining to urinate, urinating in inappropriate places, and blood in the urine. 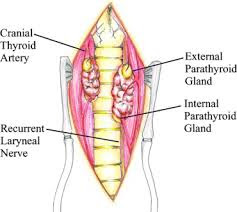 The most commonly recommended treatment of primary hyperparathyroidism is parathyroidectomy – surgical removal of the abnormal gland.  Ultrasound of the neck helps identify the exact location of the tumor, i.e. whether it is one of the external parathyroids or the internal parathyroids.  This allows for proper pre-surgical planning.   Anesthetic complications related to elevated calcium levels include abnormally slow heart rate, high blood pressure, and cardiac arrhythmias, so careful anesthetic planning is a must.  At surgery, one large parathyroid gland is usually found.  As a result of that one gland producing such high amounts of PTH, the other three glands have shut off production of PTH completely, causing them to atrophy and making them impossible to identify.  A tumor of one of the external parathyroid glands is usually easy to identify (unless it is embedded in fat, making the identification a bit trickier).  Parathyroid tumors involving one of the internal parathyroids are harder for the surgeon to identify.  If an internal parathyroid is affected, removal of that entire lobe of the thyroid gland is required.  In dogs, a method of treatment called chemical ablation that involves the injection of ethanol into the abnormal gland has been described, however, studies of the effectiveness of this method of treatment in cats are lacking.