Disorders of the Feline Esophagus

Disorders of the Feline Esophagus

Last week I examined a cat that was brought to my feline-only veterinary practice for a gastrointestinal problem.  I asked the client what her main concern was, and she said that the cat was regurgitating frequently.  I asked if the cat was truly regurgitating, or if he was vomiting.  She said, “I didn’t realize there was a difference”. 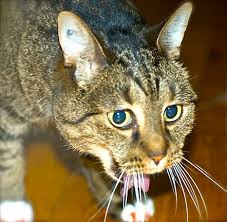 I would venture that most people incorrectly believe that vomiting and regurgitating are synonymous.  Vomiting is the forceful expulsion of stomach contents through the mouth.  When animals vomit, the forceful contractions of the stomach are clearly visible.  Regurgitation, on the other hand, is the ejection of undigested food from the esophagus, the tube that connects the mouth and the stomach.  (In lay terms, we often call the esophagus the “food pipe”, similar to the way we call the trachea the “windpipe”.) Regurgitation is a passive process; the animal leans forward, puts its head down, and the esophageal contents are expelled.  Unlike vomiting, there is no salivation, retching, or violent abdominal contractions.  The two processes are completely different, and so are the disorders that cause them. 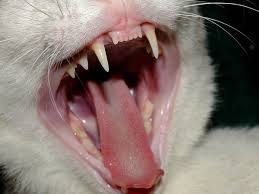 Upon further questioning of my client, it was apparent that the cat was actually vomiting, and this was no surprise.  Esophageal disorders are much less common than disorders of the stomach and intestines in cats.  Table 1 is a list of the most common esophageal disorders in cats. 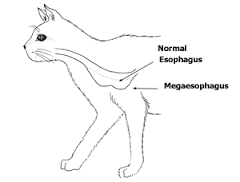 Megaesophagus is a condition in which the esophagus is weak and unable to propel food from the mouth to the stomach.  The esophagus becomes flaccid and large (hence the “mega”, derived from Greek, meaning “large”).  There are several causes of megaesophagus in the cat, such as congenital and hereditary disorders (Siamese cats are predisposed) and neuromuscular disorders (such as dysautonomia and myasthenia gravis).  In most cases, the underlying cause is never identified.  Regurgitation is the most prominent sign in cats with megaesophagus.  If megaesophagus is secondary to a neuromuscular disorder, other signs, such as weakness, muscle pain, and muscle atrophy may be present.  Some cats with megaesophagus will regurgitate food into their mouths and then accidentally inhale some food into their lungs, leading to aspiration pneumonia.  Additional clinical signs associated with aspiration pneumonia include fever, labored breathing, and coughing.   Diagnosis of megaeophagus can often be made via radiology (x-rays).  Administration of barium before the x-rays are taken greatly enhances the visualization of the esophagus, aiding in the diagnosis.  Treatment of megaesophagus consists mainly of supportive care, except in those rare cases where a treatable underlying cause has been identified.  Supportive care involves feeding frequent small meals with the cat in an upright position.  The cat is trained to eat from a bowl placed on an elevated platform.  Ideally, the cat is held upright for 10 minutes after eating so that gravity may assist the movement of food into the stomach.  Liquefied food works best. 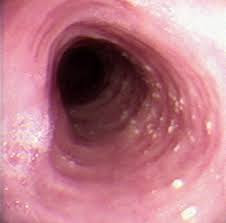 Esophageal foreign bodies are occasionally seen in cats.  The most commonly swallowed objects are fishhooks, sewing needles, and bones.  Depending on the type of the object, the size and shape, and how long the object has been there, foreign objects can cause significant damage to the esophagus.  Clinical signs are an acute onset of gagging, retching, salivation, repeated swallowing, and regurgitation. (Table 2) Perforation of the esophagus by the foreign body is a serious complication and can cause fever, pain, coughing, labored breathing, and abscess formation. Because the likelihood of complications increases with time, identification of a foreign body should be treated as an emergency.  Most esophageal foreign bodies are visible on x-rays.  Once identified, the foreign body should be retrieved using an endoscope.  As the endoscope is passed into the esophagus and the object is seen, grasping forceps can be employed to snare it. Care must be taken to avoid creating further damage when sharp objects are removed.  If the object cannot be extracted orally, an attempt should be made to push it into the stomach, where it can be removed via abdominal surgery.   If the object cannot be removed orally or advanced into the stomach, then esophageal surgery is required.  Esophageal surgery is much more complex and expensive and has a markedly worse prognosis.

Gastroesophageal reflux disease (GERD) is common in people, but uncommon in cats.   It occurs when acid from the stomach refluxes, i.e. leaks backward, into the esophagus.  It is sometimes seen as a complication after anesthesia; when cats are anesthetized, the sphincter muscle between the stomach and esophagus may relax, allowing caustic gastric juice to enter the esophagus.  Conditions that cause chronic persistent vomiting, as well as anatomical conditions, such as a hiatal hernia (see next section), can also lead to acid reflux and esophageal damage. The clinical signs of GERD are similar to those of megaesophagus (Table 2).  Radiographs aren’t very helpful in the diagnosis.  The best diagnostic test is endoscopy.  The endoscope allows you to visualize the lining of the esophagus.  Affected cats will often show severe redness and inflammation, erosions, ulcers and possibly hemorrhage.  In some cases, the junction between the esophagus and stomach is seen to be wide open (in normal cats, it is closed) and reflux of gastric contents may actually be observed during endoscopy.  The goals of treatment are to prevent reflux, decrease the acidity of the stomach contents, promote healing of the damaged esophagus, and control infection.   To prevent reflux, drugs that tighten the sphincter between the esophagus and stomach and promote gastric emptying are given.  The most common are metoclopramide (Reglan) and cisapride.  To reduce gastric acid, drugs called H2-receptor blockers may be given.  Familiar ones are cimetidine (Tagamet), ranitidine (Zantac) and famotidine (Pepcid).  Famotidine is ideal for cats in that it can be given once daily.   More potent acid inhibitors, such as omeprazole (Prilosec) or pantoprazole (Protonix) may be indicated in severe cases.  Sucralfate (Carafate) is an oral drug that, if compounded as a liquid, binds selectively to erosions in the esophagus, acting as a barrier or “Band-Aid” against damage from stomach acid.  Antibiotics are usually administered to prevent or control infection by oral bacteria that may colonize the eroded areas in the esophagus.  A potential complication of foreign bodies and reflux disease is the development of a stricture (discussed below). 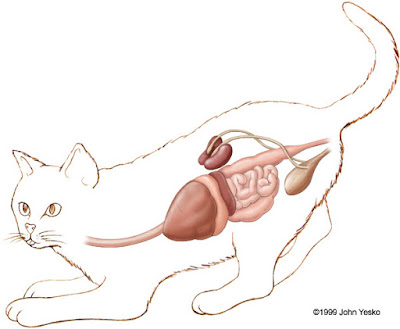 The diaphragm is a muscle that separates the chest cavity from the abdomen.  There is an opening in the diaphragm, called the esophageal hiatus.  The very end of the esophagus passes through the hiatus and gives rise to the stomach, which is on the abdominal side of the diaphragm.  A hiatal hernia occurs when part of the stomach pushes through the hiatus and goes into the chest.  Sometimes the herniated piece of stomach moves back and forth through the hiatus (a “sliding” hiatal hernia); in other cases, the stomach goes through the hiatus and gets stuck there.  In most cases, it is a congenital condition, i.e. cats are born with it.  Some cats acquire the condition later in life, sometimes secondary to trauma.  Hiatal hernias cause acid reflux and many or all of the clinical signs described in the previous paragraph.  Diagnosis is usually made via radiographs, especially if the hernia is persistent (i.e. not sliding).  On the radiograph, a small portion of the stomach will be visible on the chest-side of the diaphragm.  Treatment requires surgical correction of the hernia, as well as administration of antacids and protectants.

Esophageal stricture is an abnormal narrowing of a portion of the esophagus.  Strictures can develop after any severe injury to the esophagus, but they most commonly occur as a complication of reflux esophagitis and foreign bodies.  Certain drugs given by mouth in tablet or capsule form can result in esophageal damage and stricture if administration is not followed by a small amount of water or food, most notably the antibiotics clindamycin and doxycycline hydrocholoride.  Strictures develop slowly, so the clinical signs usually include progressively worsening inability to eat solid food, regurgitation immediately after eating, and weight loss despite an excellent appetite.  Diagnosis can usually be made via radiography after administering barium.  Barium outlines the internal portion of the esophagus and allows visualization of the stricture and assessment of the length and number of strictures present.  Endoscopy is useful for identifying strictures as well as for treatment.   Balloon dilation is a procedure in which a catheter with a deflated balloon at the tip is advanced into the stricture with the cat under anesthesia.  The balloon is then inflated, opening up the stricture.  The procedure is repeated at 5-7 day intervals.  Hemorrhage or perforation is an occasional complication.  Some cats do well, but in many cats, the stricture reforms.  In these cases, surgery may be attempted, but a guarded prognosis must be given.

Cancer of the esophagus is rare in the cat.  The most common cancer seen is squamous cell carcinoma, usually in elderly cats.  Other tumors, such as sarcomas and plasmacytomas are seldom seen.  Because these tumors grow slowly, the clinical signs are similar to those seen in cats with esophageal strictures, i.e. slowly progressive onset of regurgitation, salivation, retching and difficulty swallowing.  Radiographs may reveal a soft tissue mass in the region of the esophagus, which is often made more visible if barium is administered before the radiograph is taken.  Endoscopy not only allows visualization of the tumor, but also allows biopsy specimens to be obtained for definitive diagnosis.  Surgical removal is the only treatment option, although the prognosis is poor, as the tumor may be too extensive to be removed. In many instances, the tumor has metastasized to other parts of the body.

Disorders of the esophagus are uncommon in cats.  It is important that veterinarians distinguish vomiting from regurgitation in their patients. It should be re-emphasized that administration of any dry tablet or capsule to a cat should be followed by a small amount of water or food, to prevent esophageal irritation and possible stricture formation.

Table 1 – Common disorders of the esophagus in cats