Cat feet are fascinating.  They function as shock absorbers when landing after aerial acrobatics.  The pads on the paws are thick, with a substantial amount of adipose (fat) tissue just below the pad surfaces.  This acts as a cushion, allowing for cats to walk quietly.  To me, however, the most impressive parts of the feet are the claws.

All members of the family Felidae have claws.  The claws are retractable.  When the foot is relaxed, the claws remain sheathed by a layer of modified skin, which is surrounded by the fur on the toes.  Keeping the claws sheathed helps prevent wear and tear by minimizing contact with the ground.  When necessary, cats can voluntarily extend the claws on one or more paws.  The most common reasons for exposing their claws are hunting, self-defense (often against veterinarians, unfortunately), climbing, “kneading”, and for extra traction, like when my new kitten dashes across our expensive Persian rug.

Cats typically have five toes on their front paws and four toes on their back paws, and each of these toes has a claw associated with it.   Not all cats conform to the formula of five toes in the front and four in the back, however.  A naturally occurring genetic mutation occasionally occurs, causing cats to have extra toes.  This is called polydactylism.  My adult cat, Mittens, is polydactyl, hence her corny name.  As you can see in the photo, it’s an appropriate moniker.  Her feet are huge! 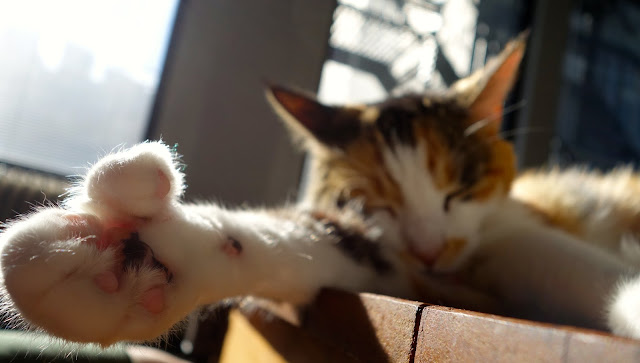 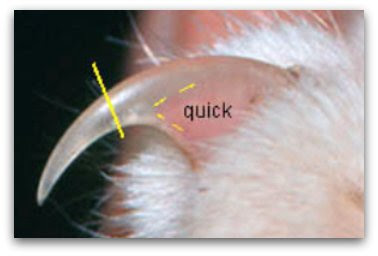 I see a fair number of claw injuries in my feline-only veterinary practice.  The most common are broken nails and overgrown nails.  Broken nails often occur because the claw becomes entangled in a carpet or thick fabric.  When the cat pulls the foot loose, the nail can tear.  Sometimes, the nail gets completely torn off. In most cases, the nail is only partially torn off and is dangling, causing pain or discomfort every time the nail touches anything.  Torn nails are uncomfortable for the cat because after a tear, the underlying tissue, called the quick, becomes exposed.  The quick contains blood vessels and nerve endings and is sensitive.  A torn nail often causes the cat to limp on the affected foot.  In severe cases, the cat may refuse to bear any weight at all on the foot.  Treatment for a partially torn nail involves removal of the dangling piece of nail by your veterinarian.  Because cats scratch around in their dirty litter boxes with their feet, the exposed quick is at risk of becoming infected.  Your veterinarian may prescribe antibiotics and possibly pain medication.  A new nail often regrows from the exposed quick, however, that nail may end up looking malformed compared to the others. 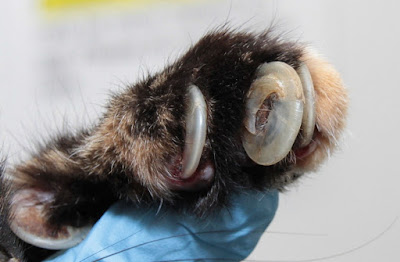 If a cat’s claws aren’t trimmed regularly, the claw can grow long enough that it actually curves all the way around and can pierce the pad of the affected toe.  The wound that occurs may get infected, causing pain and discomfort to the cat.  Treatment requires trimming the offending claw.  This should be performed by your veterinarian and should not be attempted at home.  If the pad is infected, your vet will prescribe antibiotics.  In some cases, soaking the foot in an antiseptic solution may be beneficial.  Overgrown nails seem to happen only in the front feet.  The rear nails are shaped differently.  Rear claws may grow very long if untrimmed, but they grow outwardly rather than curving down and around.

Overgrown claws can be prevented by keeping your cat’s nails trimmed.  Arden Moore, in her book “Fit Cat”, gives a few quick and easy steps for giving your cat a “pet-icure”:

·      Get the equipment you need: nail clippers designed specifically for cats, a thick towel, and styptic powder (in case you trim a nail too short and it bleeds)

·      Position your thumb so that it rests on top of one paw, with your fingers of that hand underneath.  Gently press on the top of one of the toes to expose the nail.

·      Snip the clear, white tip of the nail.  Do not cut too close to the pink part (the quick), or you might nick the vein that runs through the nail, causing bleeding.

·      Give lots of praise to your cat during the nail trimming session, so that your cat might see it as a positive experience.

To make nail trimming less stressful for your cat, start them young.  Play with your kitten’s feet regularly to get them used to being handled.  Gently squeeze the footpads to expose the nails, and then release.  Give a healthy treat after handling the feet.  Cats who have had their feet handled frequently as kittens are more amenable to nail trimming.  Some cats, however, simply will not allow their owner to trim the nails.  In these cases, taking the cat to your veterinarian or to a groomer should solve the problem.   Claws should be trimmed approximately every six to eight weeks.