If you can’t stomach the thought of an article about the stomach, then this column may not be for you.  But have no fear, I will make this material easy to digest. 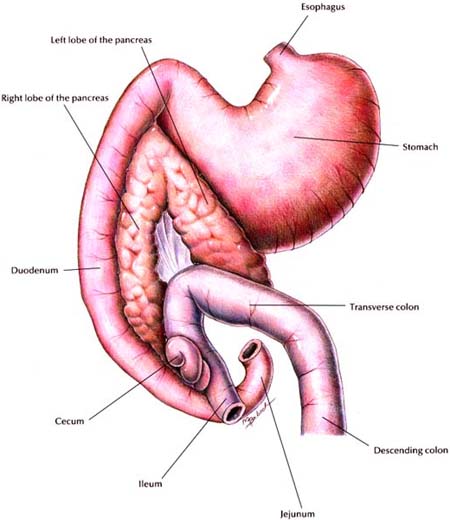 The next part of the stomach is the antrum.  The antrum is very muscular and serves to grind up the food into smaller pieces.  The pylorus is a sphincter – a ring of muscle – that regulates the flow of stomach contents from the stomach into the duodenum, the first part of the small intestine.  The pylorus also serves as a one-way valve, preventing backflow of intestinal contents into the stomach.  The stomach is shaped like a lopsided kidney bean.  The longer outside margin, on the left side of the body, is called the greater curvature.  The shorter outside margin, on the right side of the body, is the lesser curvature.

The most common sign that something might be amiss with your cat’s stomach is vomiting.   Every cat vomits now and then, and most of the time there’s a harmless explanation for it, such as eating too fast, a sudden change in diet, or hairballs. 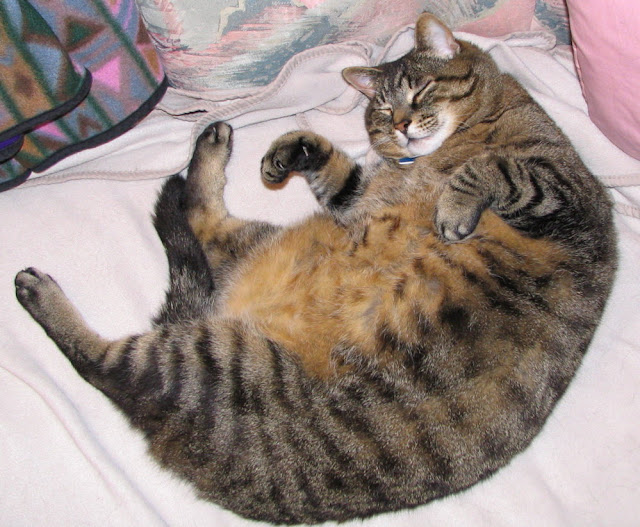 When cats groom themselves, the barbs on their tongues remove the loose and dead hair. These hairs are swallowed. Most of the hair passes through the digestive tract, but some hair may accumulate in the stomach, where it can form into a hairball. Ultimately, cats will rid themselves of hairballs by vomiting them up.  Long-haired cats like Persians and Maine Coons are predisposed to hairball problems. Cat owners should be cautioned, however, from instinctively blaming all vomiting on harmless hairballs.  Certainly if you see a big hairball in the vomited material, and this occurs infrequently, then hairballs is the likely diagnosis.  But cats that vomit hairballs very frequently usually have an underlying disorder, and this should be investigated by a veterinarian.

Inflammatory bowel disease (IBD) is a disorder in which the immune system sends inflammatory cells into various segments of the gastrointestinal tract.  The stomach is commonly affected.  In fact, my own cat Mittens has IBD of the stomach.  Other signs, such as decreased appetite and weight loss may accompany the vomiting.  Most affected cats tend to be middle-aged or older, although any age cat can be affected.  To make a definite diagnosis, biopsy specimens from the stomach are required.  These can be obtained via surgery, or by endoscopy.   Endoscopy is a procedure where a long snake-like tube with a camera on the end is inserted down the esophagus and into the stomach, and biopsy samples are obtained.  This is how my cat’s IBD was diagnosed.  Treatment with anti-inflammatory medications often brings the vomiting under control.

Sadly, cancer of the stomach can occur in cats.  Although it can strike cats of any age, it is mostly seen in older cats.  Lymphoma is the most common stomach cancer, but other types such as gastric carcinoma and mast cell tumors can occur.  If the tumor involves a discrete area of the stomach, surgery to remove the cancerous part of the stomach may be feasible.  Lymphoma is considered to be a systemic disease, and chemotherapy is the treatment of choice.  I treated a cat named Beowulf with chemotherapy for high-grade stomach lymphoma.  He remained in remission after a year of treatment, so we stopped the chemotherapy.  Three years later, he appears to be cured of his cancer.

Some of the medications we used to treat stomach disorders in cats are similar to the ones we use to treat people.  If excessive stomach acid is believed to be contributing to a cat’s symptoms, we prescribe drugs like cimetidine (Tagamet), ranitidine (Zantac) and famotidine (Pepcid).  Cats needing a stronger antacid can be given omeprazole (Prilosec).  However, cat owner should never administer any over-the-counter medications without consulting their veterinarian, because the dosages for cats will very different, of course.