Reader Question: My Cat is Peeing Outside the Litter Box. Is it because of the Other Cats in the Household? 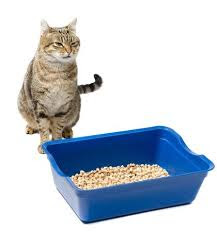 Question:
Dear Dr. Plotnick,
I have a male cat, 18 years old, who is urinating all over the house even though I am cleaning the litter box (shared by 3 cats) daily. I haven’t changed the type of cat litter, or his diet. This behavior is not new but there is an aggravation.

The two other cats are 1 male and 1 female. Could his behavior be due to the third cat being a male? What can I do to make him urinating in the litter? My veterinarian could not find any reason for this behavior.

Answer:
Dear Jacqueline,
Whenever a cat urinates outside of the litter box, it is either a medical problem, marking behavior, or inappropriate urination.  You mention that your vet couldn’t find a reason for this, so it looks like a medical problem has been ruled out.  It’s hard for me to comment on whether this is a territorial thing between this cat and the other male based on the limited information in your letter. But I think I see the problem.  You mention that you have one litter box that is shared by the three cats.  In some cases, this situation may be fine, but when inappropriate urination problems arise, one litter box becomes inadequate.  The magic formula is “n + 1”, i.e. you should have one more box than the number of cats in the house.  So, if you have three cats, you should have four litter boxes.  I know that this is a big undertaking and it might be difficult to find the space to add three additional litter boxes; hopefully, you can at least add two more. If the litter box you currently have has a hood on it, the new boxes should not.  Studies have shown that cats prefer a box with no hood.  Cats also prefer the texture of clumping cat litter, so if you’re not using this type of litter in the current box, you should start using it in the new boxes.  You also have to thoroughly clean the spots on which the older male has urinated.  You need to use an enzymatic cleanser, one that doesn’t just mask the urine smell, but actually destroys the odor molecules.  I’d bet that just adding the a few new unhooded litter boxes with clumping litter would resolve your problem.
Labels: behavior cats Health litterbox Questions/Answers spraying