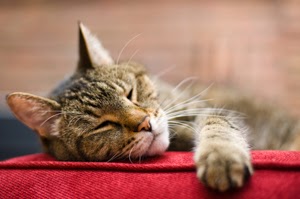 My 12-year-old cat Molly has just been diagnosed with small-cell intestinal lymphoma, following a surgical biopsy.  What can I expect in terms of treatment and prognosis? Thank you very much.


I’m sorry to hear that Molly has lymphoma. The encouraging news is that her form of lymphoma is very treatable, and most cats respond very well to treatment.

The common treatment protocol involves giving two drugs, prednisolone and chlorambucil.  Prednisolone is usually given twice daily, initially.  Chlorambucil is typically given every other day.  If cats respond well to this protocol, the prednisolone may be reduced to once daily.  Treatment is life long.

Cats with low-grade lymphoma should also have a blood test to assess their vitamin B12 level. A significant percentage of affected cats will have a deficiency of vitamin B12.  These cats should receive injectable vitamin B12 supplementation to normalize the levels, as it has been shown that cats with low B12 levels do not show an optimum response to the medical treatment of lymphoma unless their low B12 level is corrected.

The company that used to make chlorambucil tablets was purchased by another company. The new, evil company immediately (and unscrupulously) almost doubled the price, to nearly $12 a tablet! Given every other day, this amounts to an expense of almost $180 a month. (Is there any wonder why so many people hate the large pharmaceutical companies?)  Fortunately, compounding pharmacies can prepare the chlorambucil in less expensive formulation, such as capsules, liquids, and even flavored treats. Many cat owners wonder if the compounded formulations are effective. I’ve prescribed these formulations many times, and yes, they are effective.

The median survival time for cats with low-grade intestinal lymphoma is 25 months, which, for cancer, is amazingly good.  I personally have treated cats with this drug regimen and have had individual patients live for three, four, and even five years. (One cat, Oscar, lived 63 months.) Good luck with Molly.
Labels: Chlorambucil Gastrointestinal Lymphoma Health lymphoma Prednisolone Questions/Answers Veterinary Medicine vitamin b12