What exactly is the FVRCP Vaccine? - Feline Viral Rhinotracheitis, Calicivirus, and Panleukopenia 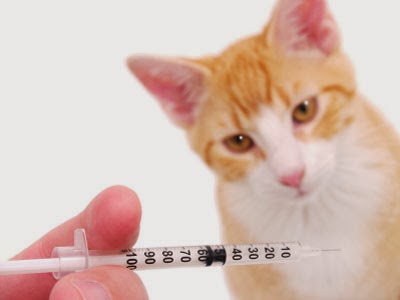 What exactly is the Feline Viral Rhinotracheitis, Calicivirus, and Panleukopenia (FVRCP) vaccine?

Cat owners bring their cats to the veterinarian regularly for vaccinations.   We divide vaccinations into “core” and “non-core”.  Core vaccines are those that EVERY cat should receive.  Non-core vaccines are given to cats based on that cat’s particular lifestyle.

Not surprisingly, the vaccine most pet owners are familiar with is the rabies vaccine, as it is required by law in most jurisdictions. Obviously, it’s a “core” vaccine.  The other core vaccine for cats is the FVRCP vaccine.  But do most cat owners really know what the letters in FVRCP really stand for, and what the vaccine really protects against?  If not, read on…

The “FVR” in the FVRCP stands for feline viral rhinotracheitis. Rhinotracheitis means infection of the nose and trachea.  We call it “viral rhinotracheitis” because the virus responsible is the feline herpesvirus.  Feline herpesvirus (FHV) is a major cause of upper respiratory disease in cats. FHV is very contagious between cats.  Most cats become exposed to FHV at some time in their lives, and the majority of exposed cats become infected.  Cats typically develop a mild upper respiratory infection – sneezing, conjunctivitis (“pink eye”), runny eyes, nasal discharge – which often resolves on its own. In some cats, the virus induces severe upper respiratory disease, and a few of these cats may develop persistent upper respiratory symptoms for years.  The herpes virus can also cause a variety of eye disorders, and may cause skin disease as well.  Cats of all ages are susceptible, however, kittens appear to be affected more severely than adults. A presumptive diagnosis is made based on evaluation of the cat’s history and clinical signs.

After a cat recovers from the initial infection, the virus remains in the body as a latent infection.  The dormant virus can be reactivated during times of stress, crowding and concurrent  illness, resulting in a recurrence of clinical signs. During these recurrences, infected cats shed the virus profusely in their eye, nasal, and oral secretions, increasing the risk of infecting other cats.  Although there are antiviral drugs that can be administered to cats showing symptoms of herpesvirus, there are currently no drugs that eliminate FHV from the body.  A very new drug, polyprenyl immunostimulant, is just about to be marketed as a treatment for feline herpesvirus.

The “C” in the FVRCP vaccine stands for calicivirus. The feline calici virus (FCV) is an important cause of upper respiratory and oral disease in cats. Respiratory signs caused by calicivirus (sneezing, ocular discharge, nasal discharge) tend to be milder than those caused by the herpes virus, however, calici virus may cause ulcers on the tongue of cats and kittens.  The virus is mainly transmitted by direct cat-to-cat contact, however, indirect transmission via contamination of the environment or through contaminated objects is also possible.  Acutely infected cats will shed the virus in oral, ocular, and nasal secretions for two or three weeks, although some cats become chronic carriers, and will shed the virus persistently for months or even years. Cats of any age are susceptible, although kittens are most susceptible. Cats housed in groups, such as in boarding catteries, shelters, and breeding colonies, are at increased risk for contracting FCV.

Finally, the “P” in the FVRCP stands for panleukopenia.  (That’s a big word, I know. It’s easy to say, though, if you break it down phonetically:  “pan-luke-oh-PEE-nee-uh”.  Panleukopenia is a highly contagious viral disease caused by the feline panleukopenia virus (FPV).  Cats infected with the virus often show signs of lethargy, poor appetite, fever, vomiting, and severe diarrhea.  The word panleukopenia means “a decrease in white blood cells”, and that is what is seen on the bloodwork of affected cats. In young cats, the disease is often fatal.  , if infected during pregnancy, may give birth to kittens with a condition called cerebellar hypoplasia, a neurologic disorder that causes severe incoordination.  The virus is spread mainly through contact with feces, however, the virus is very stable in the environment and can be spread via contaminated food bowls, water bowls, litter boxes, and health care workers.  Treatment consists mainly of supportive care – hospitalization, fluid therapy, antibiotics, and nutritional support. With aggressive care, some cats survive the infection, however, most young kittens succumb to the virus.

You can see from the description above just how important the FVRCP vaccine is.  Immunity to this vaccine lasts at least three years, so it does not need to be given annually.
Labels: calicivirus cats FVRCP Health herpesvirus panleukopenia Questions/Answers Vaccine Veterinary Medicine