The Great Wall of China Cats

In May of 2012, I took a trip to China.  While in Beijing, I made plans to visit the Great Wall, of course.  A few weeks before my trip, I sent an e-mail to my tour guide, Vivie, telling her that I was a cat veterinarian and that I like to encounter kitties in whatever country I’m visiting, if possible. She said she’d ask some of her friends and colleagues about trying to maximize my chances of encountering cats while on the trip.  A few days later, she wrote back, informing me that a friend of hers told her that there’s a colony of stray cats that lives behind the ticket booth at the Great Wall.  She said that they tend to be out and about early in the morning.  I told her that I definitely wanted to get there early and see if I could encounter them. 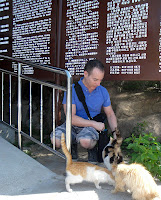 When I did eventually get to Beijing, Vivie took me to the Great Wall early, as promised.  Armed with a ziploc bag full of bacon that I had swiped from our hotel’s breakfast buffet, I scouted around the base of the ticket booth, and I did indeed encounter about 7 or 8 cats.  They were sweet and friendly, and I fed and patted them all.

In November of 2013, clients of mine (Todd and Christine P.) told me that they were going to take a long (four weeks!) trip to China.  They had always wanted to visit China, and they had read my blog posts that described the sites and experiences that I had while there, which they said had only reinforced their desire to visit. (This was flattering to hear.)  On my recommendation, they hired the same tour guide, Vivie.  A few weeks later, toward the end of their trip, I received an e-mail from Todd and Christine.  Embedded in the e-mail was a photo of several cats at the base of the Great Wall ticket booth, chowing down on some kibble. 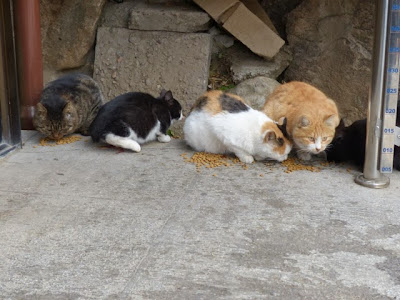 I was gratified to see that Vivie was as accommodating to them as they were to me.  Us cat folks miss our own kitties when we are away traveling, and meeting and greeting cats in the countries that we’re visiting helps satisfy the kitty-fix that we crave. 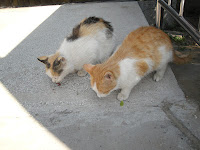 There was something about one of the cats in the photo, though, that caught my eye.  The third cat in the picture, a calico with a very distinct color pattern, looked sorta familiar.  So, I went into the photo file on my computer and found my China pictures.  Sure enough, one of the cats in my photos is the same cat in their photo!
The cat in my photo looks a little scraggly; the hair coat is a little pale and the colors are a bit washed out.  But the coat color pattern is unmistakable.  I was happy to see that the kitty in their photo looked more robust and healthy than in my photo.  I attribute this to the magical powers of bacon, which I fed to this cat in May of 2012.  Seventeen months later, the cat is still showing the effects. 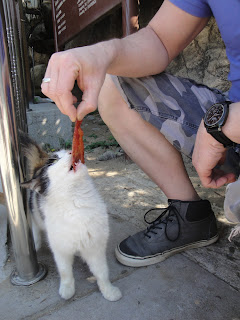