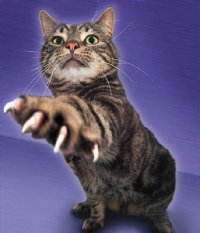 The other day, a client of mine called in a bit of a panic.   Recently, a stray cat appeared on the doorstep of his upstate vacation home, and even though he wasn’t intending on adding another cat to his single-cat household, this cat was pretty irresistible.  A neutered male cat, declawed in front, no identification, and very friendly.  Given that someone had obviously owned this cat (or possibly still did), my client took the cat to the local shelter so that he could be checked for a microchip.  The verdict: no chip.  Still, visions of a distraught family pining for their lost cat danced in his head, and he put up posters in the neighborhood and asked the shelter to hang on to the cat for a few days while a potential owner was sought.  After 10 days, with no one claiming the big orange fella, my client was given the green light to adopt him.

The sweet kitty, now christened Opie, was taken to a local vet for examination.  The local vet ran a FeLV and FIV test, which thankfully came back negative.  The cat was given his first FVRCP vaccine, and a rabies vaccine.

So why the panic?  Or should I say unnecessary panic?  Because the vet, for some crazy reason, ran a Bartonella test, and this came back positive.   The local vet recommended four weeks of “intensive” antibiotic therapy, and warned my client of some potential “consequences” of Bartonella.

By now, most cat owners have heard something about Bartonella.  But there’s a lot of misinformation out there, so I hope to set the record straight with this blog post.

Bartonella henselae is the organism responsible for cat scratch disease in humans.  Some people call it “cat scratch fever”, but whenever I hear that term, I think of that horrible song by the vile, loathsome Ted Nugent, so I think I’ll stick with the preferred term, cat scratch disease. 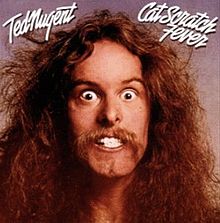 Not everyone who gets scratched by a cat will get cat scratch disease.  I’ve been scratched hundreds of times, and have never gotten it.  Most people do NOT get cat scratch disease when scratched.  One of my technicians, many years ago, did contract cat scratch disease after being scratched at work.  When people with normal immune systems do contract cat scratch disease, they go through a period of illness, and then they recover, with no problems. The lymph node closest to the area where the person was bitten or scratched will usually become swollen for a few weeks or months. Occasionally, an abscess will form in that lymph node, and a fever may develop. Children seem to be more susceptible than adults.  It’s simply not very common in adults.  Again: if you have a competent immune system, getting bitten by a Bartonella-infected cats usually doesn’t cause any illness at all, and when it does, people get over it.  People with compromised immune systems, however, can get very sick from Bartonella.

Bartonella is common in cats worldwide.  Several studies have reported a prevalence of infection of up to 36% of cats.  If you culture the blood of healthy cats, about 25% of them will show Bartonella in their bloodstream.  Where do these cats acquire this infection?  From fleas.

Does Bartonella cause problems in cats?  Most cats that are naturally infected with Bartonella do not show any clinical signs of disease.  Lots of studies have been done to see if there is a cause-and-effect relationship between Bartonella infection and clinical signs of disease.  People have experimentally infected cats, and people have studied cats that are infected naturally.  A clear correlation between infection and disease has been hard to prove.  Part of the problem is that many studies define infection based on testing positive for antibodies in the bloodstream.   Bartonella antibodies in the bloodstream only demonstrates that the cat has been exposed to Bartonella.  It doesn’t necessarily mean there’s an active infection.  Another difficulty in proving that Bartonella infection is responsible for a cat’s clinical signs is the fact that so many healthy cats are infected with Bartonella.

A lot of reports describe clinical signs in cats that were experimentally infected with Bartonella.  In a recent study where they deliberately infected six cats with Bartonella, three of them showed lethargy and severe fever, and one cat became very very sick.  Another study of 18 cats that were injected with Bartonella-infected blood showed fever, mild anemia, lymph node enlargement, and mild neurologic signs.  At autopsy, there were all sorts of findings (liver inflammation, heart muscle inflammation, kidney inflammation, etc.)  So, in most cases, if you experimentally infect cats with Bartonella, the infection persists, and cat may develop clinical signs, but they’re mild and cats recover without treatment.   These experimental studies are interesting, but they’re not reflective of what happens in the real world.  What’s more important is what happens when cats are naturally infected.

Most cats that are naturally infected with Bartonella do NOT show any clinical signs.  The organism circulates in their bloodstream without causing any problems.  There have been a few studies, however, that suggest a link between Bartonella and signs of disease.  Let’s check them out:

Bartonella has been implicated in some eye disorders.  There have been a fair number of case reports and studies that have tried to tie Bartonella to uveitis (an inflammatory condition involving some internal structures of the eye), as well as conjunctivitis.  Some case reports have been pretty convincing.  A big study that was done, however, compared 113 cats with uveitis to 253 cats that were healthy (or had illness that wasn’t related to the eyes), and there was no difference in the Bartonella antibody level between the two groups.  So, despite the case report that was very convincing, the evidence to substantiate Bartonella as being a common cause of uveitis is pretty weak.  I actually had a case of a Manx cat that had chronic, recurrent uveitis.  I would treat with anti-inflammatory drugs, and the uveitis would resolve, but it eventually returned in a few days or weeks.  Uveitis can occur for no discernible reason, or it can occur secondarily to some other systemic illness or infection.  I searched for other illnesses, such as FeLV, FIV, FIP, and toxoplasmosis.  I finally did a Bartonella culture, which came back positive.  I treated the cat with appropriate antibiotics and the uveitis resolved and never recurred.  So, I do think Bartonella, in rare instances, can cause uveitis, but again, this is uncommon.

A lot of cats get chronic rhinosinusitis – inflammation of the nasal cavity and sinuses.  This is usually a result of a severe herpesvirus infection as a kitten.  These cats recover from their infection, but they remain chronic sneezers and snufflers for the rest of their lives.  People have speculated that Bartonella might play a role, but a study investigating the role of Bartonella in chronic rhinosinusitis didn’t reveal any differences in the prevalence of Bartonella in these cats, compared to normal cats.  So, it looks like Bartonella isn’t involved in this condition.

Hyperglobulinemia is a big word that means an elevated level of globulins in the blood stream.  The globulin portion of a cat’s serum is where you’ll find the antibodies.  So, if a cat is making a lot of antibodies, they will have a high level of globulins.  Some conditions are known to cause elevated globulins, such as dental and gum diseases, feline infectious peritonitis (FIP), and multiple myeloma (a type of bone marrow cancer), to name a few.  A very recent study investigated the association between Bartonella infection and high globulins in cats, and the results confirmed that there is a strong correlation.  This is a useful finding for veterinarians, because sometimes we’ll encounter a cat with elevated globulins, and after an extensive workup, we still cannot determine the cause.  In the future, I’ll be looking for Bartonella in these cases, now that this study shows a strong correlation.

Okay, I’ve saved the best for last:  stomatitis.   There is a well-known condition in cats that goes by a variety of names.  It is a condition of severe inflammation of the gums, and often the entire mouth.  I prefer the term lymphocytic/plasmacytic gingivitis and stomatitis (LPGS).  Gingivitis means inflammation of the gums.  Stomatitis means inflammation of the mouth.  If you were to biopsy the gums, you would see tons of lymphocytes and plasmacytes, two cell types that mediate some of the body’s immune responses.  Hence the descriptive term “lymphocytic/plasmacytic”.  This is a very painful condition in cats.  Antibiotics and steroids may be a little helpful, but they rarely give cats much relief, and in many instances, extraction of nearly all of the teeth is the only way to alleviate the discomfort these cats experience.

Some early studies suggested that Bartonella might play a role in the development of chronic gingivitis/stomatitis in cats, however, subsequent studies demonstrated that the prevalence of a Bartonella antibodies, or the prevalence of Bartonella circulating in the blood stream, or the presence of Bartonella organisms in the inflamed tissues themselves, was not higher in cats with chronic gingivitis compared to cats with normal mouths.  Several other studies have confirmed this.  I had a client whose cat had a severe case of LPGS, and I told her that we could try to treat the flare-ups with antibiotics and/or steroids, but that ultimately, her cat would likely need all of the teeth extracted.  She went for a second opinion and then called me up, angry, because the new vet she went to “looked at the mouth and knew right away what the cause was; he said it was Bartonella.  How come you didn’t know this?!” she said, angrily.  Grrrrr.    Researchers can say it ‘til they’re blue in the face: Bartonella does not play a role in chronic gingivitis/stomatitis in cats, and yet, there are ill-informed vets who still perpetuate this inaccurate information.

So, what do I tell this client of mine whose new cat tested positive for Bartonella?  Cats with no symptoms do not need to be treated, UNLESS there are special circumstances:  if the cat is young (under 2 years of age) and it lives in a household with immunocompromised people or with children, it should be treated, regardless of whether the cat has any symptoms.  Treatment involves administering antibiotics for a few weeks.   Treatment with antibiotics does not eliminate the organism from the cat’s body.  It reduces the amount of Bartonella in the cat’s system, thus reducing the risk of transmission.    The antibiotic of choice is doxycycline, given for four weeks.   Let me repeat:  there is no need to give antibiotics to cats infected with Bartonella if the cat is healthy and there are no children or immunocompromised people in the household.

And that’s the story with Bartonella.  I know I’m being a bit long-winded on the topic, but there’s a ton of confusion out there.  I hope this helps clarify things.