National ProZinc Shortage - Is the PZI Generic Okay for your Diabetic Cat??

Trouble in Diabetesville
Shortage of ProZinc causes a scramble for feline insulin.

Update - As of September 12th, ProZinc is available again in limited supplies.


I own a busy cat practice, and we have a lot of diabetic cats in the practice.  Most diabetic cats require insulin injections to achieve good control of their diabetes.  Years ago, most veterinarians administered a type of insulin called protamine zinc insulin (PZI).  This insulin was derived mainly from cattle.  It was 90% beef, 10% pork in origin.  Cats respond well to bovine insulin, because the molecular structure of feline insulin most closely resembles bovine insulin; they differ by only one amino acid.  When recombinant human insulin became available, the demand for PZI insulin in humans disappeared, and it was not feasible for companies to continue to produce PZI insulin solely for use in domestic animals.  Veterinarians began using recombinant human insulin to treat diabetic cats.

Currently, there are several types of insulin products available for cats with diabetes.  Every practitioner has their own personal favorite.  Some people use insulin glargine (brand  name Lantus), while others prefer  a type called protamine  zinc insulin.  When Lantus became available, there were high hopes that this relatively long-acting insulin could be given only once daily.  Alas, this turned  out to not be the case.  Cats on Lantus still require twice daily insulin. 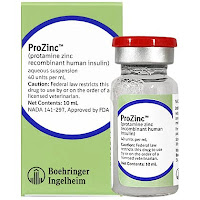 The  insulin  I’ve been prescribing  in the last few years is a type called ProZinc.  I like it because  it’s the only insulin approved by the FDA specifically for use in cats.  It is recombinant human insulin; as noted above, they don’t make insulin of animal origin anymore.   If a client comes to my practice  with a cat that has previously been diagnosed as diabetic and is already receiving Lantus insulin, I won’t switch them to ProZinc. Lantus is fine.  But for newly diagnosed diabetic cats, ProZinc is what I’ve been prescribing.  Their diabetes  usually comes under control fairly quickly, with most cats requiring somewhere  between 1 and 4 units twice daily.

Lately, it’s been difficult managing all of the diabetic  cats  in my practice, because  there is a nationwide shortage of ProZinc insulin.  This is due to a shortage of the ingredient protamine, a protein that slows down the absorption of the insulin, increasing its duration of action.

Initially, when I ran  out of ProZinc, I called some referral centers and they were kind  enough to either sell me a few bottles, or to let my clients go there with a prescription and pick up a bottle.  Then I called some veterinary pharmacies.  They had a few bottles, but of course, they were affected by the shortage as well.  A few tried to gouge me, asking an outrageous  price for a bottle.   I’ve made note of those pharmacies and have vowed never to deal with them again.

Now, it seems there’s not a bottle of  ProZinc to be had anywhere.  I’ve spoken with some veterinary pharmacies that have the ability to compound their own generic protamine zinc insulin (PZI).  They tell me that it’s the same potency as ProZinc, so it’s not necessary to re-regulate the diabetes.  Cats receiving  3 units of ProZinc twice daily should receive 3 units of generic PZI twice daily.

I’m always  leery of these claims, because you never know if the generic is as good as the brand, and small differences in potency  can have significant consequences.  To re-regulate  all of the diabetics in my practice would be a nightmare.  I’ve spoken to the pharmacist at the pharmacy that is offering the generic PZI, and he told me he’s sold many bottles during the shortage, and has not had any vet inform him of any problems.  So I’m going to trust the generic PZI for now.  The good news is that ProZinc should be back on the market in mid-September, according to our distributor.  Until then, fingers crossed that no problems arise with the generic.
Labels: diabetes insulin medication ProZinc Veterinary Medicine