My Travels in China: Shanghai Day 1

As much as I tried to psychologically will away the rain, there was no getting around it.  I had been following The Weather Channel’s 10-day  forecast for weeks, and the weather was always sunny, until about the last week before the trip.  It was still sunny for Beijing, but clouds were moving into Shanghai. The forecast said there was a 90% chance of rain today, and they were right.  We woke up this morning to a totally gray sky and a steady, annoying rain.

I wasn’t about to let this stop me from all of the sightseeing I had planned. It just meant purchasing some cumbersome umbrellas.  Not a problem. Across the street from our hotel were some shops selling umbrellas for 10 RMB. (That’s $1.60 in U.S. dollars)

Before that, however, was the bizarre experience called breakfast. Like Beijing, the breakfast at the Oriental Bund Hotel was buffet style, served in their “Champs Elysses Western Restaurant” on the 8th floor.  We had a nice view of the buffet table and dining room from the corridor of our hotel. 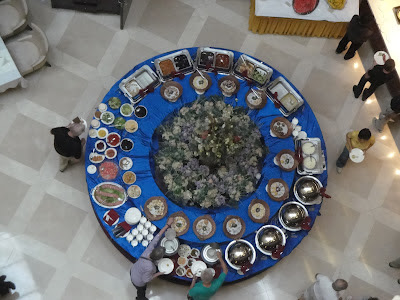 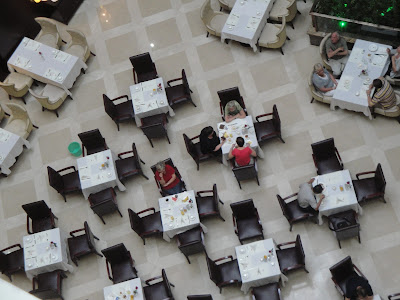 From above, one can see that it is fabulously stocked with goodies.  When you arrive in actual restaurant, it goes from being impressive, to being, well… odd.   Listen, as I’ve said before, I’m a big fan of getting out of one’s comfort zone.  I understand that not every culture goes for eggs, toast, bacon, sausage, pancakes and waffles exclusively at breakfast.  However, I just don’t know if I’m ready to eat penne pasta, sweet and sour pork, purple corn on the cob, purple sweet potatoes, pistachio mousse cake, and ham with cauliflower for breakfast.

It was bizarre.  I stopped lamenting the lack of an in-hotel gymnasium, as I ended up doing several aerobic laps around the buffet table, trying to find something appropriate for breakfast.  A salad with tomatoes, kidney beans, cucumbers, and those little tiny ears of corn-on-the-cob was just too lunchy. Lo mein noodles, fried rice, and the aforementioned sweet-and-sour pork was also too lunchy, and even crossed into the realm of dinnery. 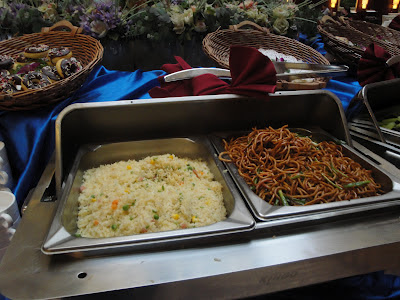 There were pastries, but they were kind of weird.  Silken tofu and pork and egg congee is just not my style, breakfast-wise.  There was Canadian bacon, thankfully, as well as regular (i.e. non-Canadian) bacon, although the latter was a tad too fatty.  There were just too many options.  Which leads to my obligatory translation joke-of-the-day: 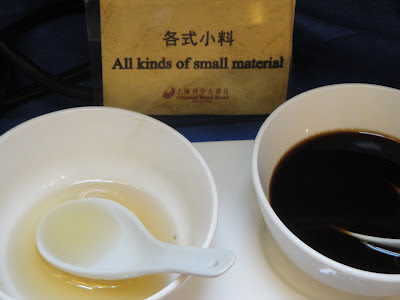 Rather than just commit to one or two things that I’d find acceptable and then just load up the plate, I was more in the mood for several things, in small volume.  This, too, was no problem 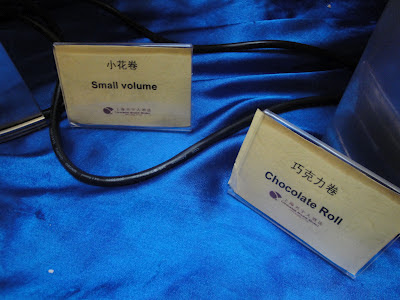 Okay… enough translational humor.  I ended up scarfing down some Canadian bacon, a weird donut, a weirder donut, two sesame balls, a slice of pistachio mousse cake, a few glasses of orange juice, and off we went. 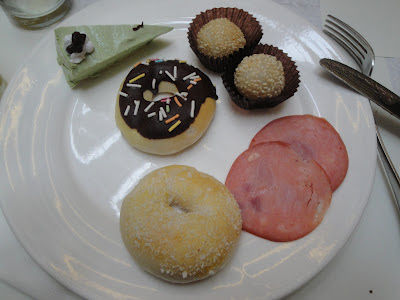 Ugh.  It was pouring out.  Grrrr.  Annoying and depressing.  Braving the downpour, with our newly purchased umbrellas, we headed to The Bund. 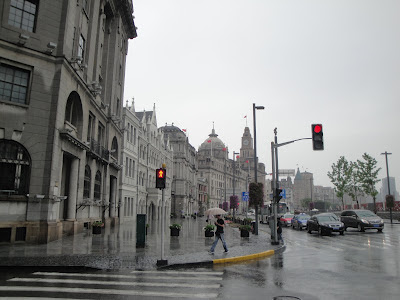 I had my guidebook in hand, and there was a nice description of each of the buildings, including the year it was built and the original purpose of the building.  The rain, alas, hampered our ability to appreciate them fully, as well as to take any semi-decent photos, but I got a few. 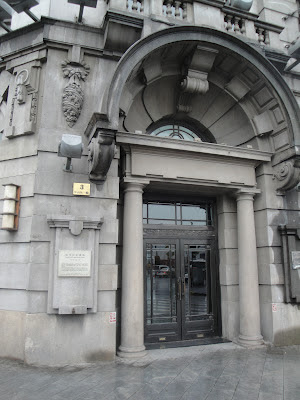 Fortunately, we saw these buildings in grand fashion from the Huangpu river cruise last night, lit up beautifully against the night sky.  The buildings are much better appreciated a bit of a distance away, from a nighttime cruise, rather than up close in the pouring rain.

The rain started to let up a tiny bit.  We started our walk down Nanjing Road East, the Champs Elysees of Shanghai. 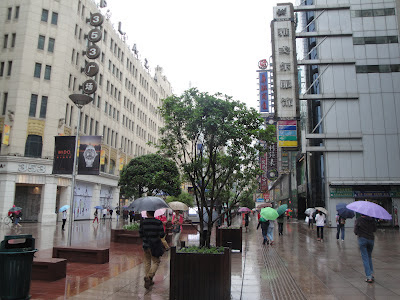 Lots and lots of high-end shops and malls.  Lots of scammers, too.  It’s amazing how many people aggressively approach you while you’re walking on the street, especially if you’re non-Asian.  I’m a native New Yorker, though, and I don’t put up with this kind of crap from anybody, especially when I’m on vacation.  And so, I’ve mastered the dirty look, the indifferent stare, the I’m-totally-ignoring-you shuffle, and most importantly, the perfect pronunciation of “bu yao”, which means “I don’t want any.”  I kind of enjoy saying it.  “Bu yao, bu yao, BU YAO!!”, I screamed at multiple pests.  They seem shocked that I’m speaking their language, and that fact that it’s this particular phrase that they’re hearing from me let’s them know that I’m  not an easy mark. They leave me alone.

For an interesting juxtaposition, we escaped the commercial mayhem of Nanjing Road and ducked down Lane 1025, one  of the side streets off of the main drag. 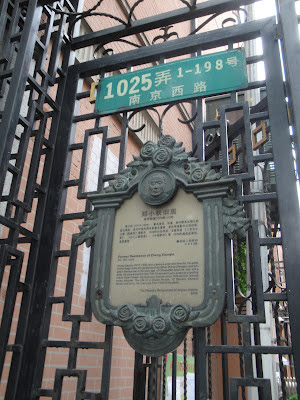 Lane 1025 is a lilong – a traditional Shanghai residential alley, containing row upon row of gorgeous red brick buildings built from 1928 to 1932 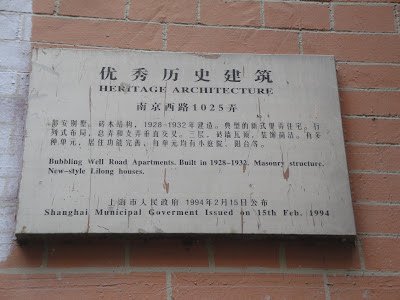 They are three stories high and are mainly residential, making up much  of the city’s low-rise housing stock. 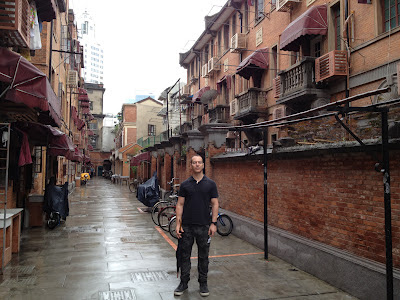 Once you get  inside this little lane complex, you almost forget that you’re in  one  of the world’s biggest cities.

We continued west on Nanjing Road, until we hit Jing’an Park on our left.  On our right, sticking out like a sore thumb in the  midst of the crazy shopping district was the Jing’an Temple. 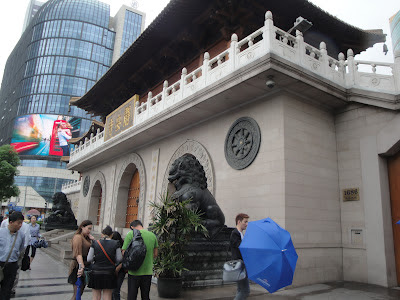 The temple has a history of more than 780 years. It was first built in the Three Kingdoms Period (220-280) and was named Hudu Chongyuan Temple. In the Southern Song Dynasty (1127-1279), the temple moved to the present location from the bank of Wusong River and became a busy and crowded place until 1908. Later, a famous calligrapher renamed the temple as Jing'an Temple in 1945 and is still named as such today. Unfortunately, the temple was burnt down to ruins in 1972. However, the reconstruction began after 1984. In 1990, Jing'an Temple was finally opened to the public.  One of the highlights of the temple is the statue of the goddess Guanyin Bodhisatva, made out of camphor wood.  It is about 20 feet tall and weighs five tons. 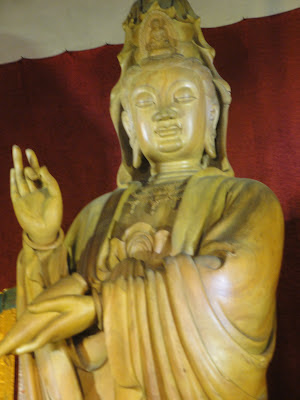