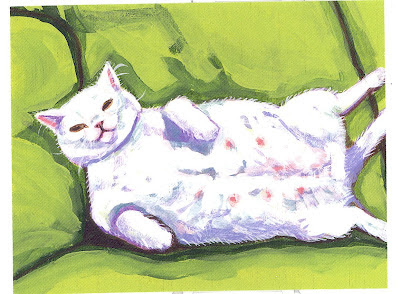 First, I received Emma’s cytology report.  The discharge from the mammary gland, which I expected to show infection, came back “highly suspicious for carcinoma”!  Uh oh.  This was looking like a mammary tumor after all.  I looked back at Emma’s history.  Emma was adopted by the owner when she was around 3 years old.  Nothing was known about Emma before that, including her age at the time she was spayed.  This is important, because cats that are spayed before they ever come into heat almost never develop mammary tumors.  Cats that are spayed after one heat will still have a reduced chance of developing mammary tumors in the future.  After two heats, however, any mammary tumor-sparing effects of spaying are lost.  This is why we encourage people to have their cats spayed at 5 ½ or 6 months of age.  I still encounter people who cling to the myth that it is best to let cats go through one heat cycle before spaying.  This is a ridiculous notion, and a dangerous one.  I suspect that Emma was spayed later than 6 months of age.  Unfortunately, we’ll never truly know.
Emma’s liver biopsy came back the next day.  The results: lymphoplasmacytic cholangiohepatitis.  Whoa. Them’s some pretty big words.  What it means, though, is this:  the liver is infiltrated with inflammatory cells.  Not the type of cells that you see with infection.  Not cancer cells.  Just inflammatory cells.   Exactly why this happens to some cats is poorly understood, and is probably beyond the scope of this column.  Fortunately, the condition is treatable, using anti-inflammatory medication.  However, this brings us a new (theoretical) dilemma.  The anti-inflammatory medication we would want to prescribe – prednisolone – suppresses the immune system.  This is a problem because that mammary gland needs to be removed surgically.  After you remove the gland, the incision has to heal.  Inflammation is part of the healing process.  If I treat the liver disease right now with anti-inflammatory medication, it would delay or inhibit the healing of the mammary incision.  Emma has two conditions, and I’m going to have to delay the treatment of one of them (the liver problem) and address the other one (the mammary problem) more promptly, because mammary tumors have the potential to be really bad, while the liver problem doesn’t seem to be affecting the cat at all.  (Again, this is surprising to me.  Cats with liver disease like this tend to be sick. They don’t eat, they lose weight, and they often vomit.  Emma has no clinical signs at all!)

The other potential problem is anesthesia.  Many of the anesthetics we use are metabolized by the liver.  Because Emma’s liver is a little sick, we need to use anesthetics that don’t tax the liver.  Shouldn’t be a problem.  My technicians are highly skilled in anesthesia.

I spoke with Emma’s owner and told her I wanted to remove the mammary gland, then wait until the incision healed completely, and once the stitches were out, we could start the cat on prednisolone for the liver.  She said okay.

On the day of surgery, we took chest x-rays to make sure that there were no tumors in the lungs.  Mammary tumors in cats are likely to be malignant, and when they spread, the lungs are a favorite place they like to go.  If we see tumors in the lungs, we abort the surgery.  After all, the purpose of the mammary surgery is to cure  the cat, and if it has already spread to the lungs, doing the surgery would be pointless.  Fortunately, the lungs were clear.

At surgery, I still did not detect an actual “mass” at the site of the mammary gland.  There was some “irregularity” under the skin near that nipple, but not your classic tumor, as I’ve seen countless times.  No matter.  I removed the gland, and anything that looked irregular nearby.  Emma did fine under anesthesia and woke up uneventfully.  Well, uneventful if you don’t count the hissing and growling (her trademark).

Two days later we had our biopsy results.  Mammary adenocarcinoma.  Yes, it’s a tumor.  But… it was a “cystic, ductular” tumor.  These types of mammary adenocarcinomas are much better than the classic solid ones.  The cystic nature of the tumor explains the discharge.  Cysts are filled with fluid, and the fluid from the gland is a reflection of that.  Tumors involving the ducts of the mammary gland tend to be not as nasty as those involving the actual mammary tissue.  The pathologist is calling this one “low grade”, meaning that it is unlikely to spread anywhere else.  All good news.  But because cats with any type of mammary cancer, whether benign or malignant, are at increased risk for future mammary cancer development, I requested that the owner feel Emma’s belly at home fairly regularly, and to let us know if anything feels weird in any way at all.  We’ll be doing the same at every six-month check up.

Emma is scheduled to come in any day now to get her stitches removed.  If the incision is healed completely, we’ll start her on her prednisolone for her liver inflammation.  We’ll monitor the success of our liver treatment by running chemistry panels every few months.  If the liver is responding, the elevated liver enzymes should return to normal.  Once that happens, we’ll taper her prednisolone dose down to the lowest dose that keeps things stable.

I hope my blog readers don’t find some of these cases a little too “medical”, but these are real cases and these are the thought processes involved in trying to manage them.