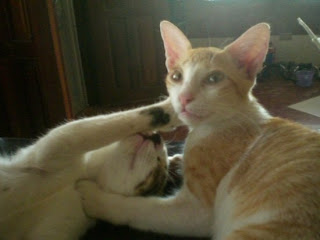 Calcium plays an essential role in maintaining a healthy body in humans and animals.  Too much of a good thing, however, can be dangerous, and this is definitely true for calcium.  Discovering an elevated serum calcium level in cats is a fairly common finding in veterinary medicine.  A variety of treatments are available that will readily bring an elevated calcium back into the normal range, but treating with medication should not be the primary approach.  Because the most  effective treatment is to address the underlying cause, our initial approach  to hypercalcemia  (elevated  serum calcium) is to search for the origin.  Once we find the cause (or should I say if we find the cause, because sometimes it can be tricky), we can prescribe the proper treatment.

“Most cat owners wouldn’t know that their cat has an elevated calcium level”, says Dr. Michael Stone, board-certified internist at the Cummings School of Veterinary Medicine at Tufts. “Cats tend to be more resistant to the clinical consequences of hypercalcemia, and in many cases, cats can have a fairly high calcium level and appear totally normal.”  Most of the reported signs are vague and non-specific, such as poor appetite and lethargy. (See Sidebar 1)  Increased thirst and urination are occasionally reported.  Elevated calcium levels can sometimes lead to the development of calcium-containing bladder stones, and cats may show signs such as straining to urinate and blood in the urine.  Very high calcium levels often lead to gastrointestinal symptoms (such as vomiting and constipation) or neurological signs (such as muscle twitches and spasms, or seizures).  Left untreated, the excess calcium can combine with phosphorus in the bloodstream, forming calcium phosphate. Calcium phosphate will deposit in a variety of tissues throughout the body, especially the kidneys, gastrointestinal tract, cardiac muscle, skeletal muscle, tendons, and ligaments. These mineral deposits can lead to tissue damage, including initiation of (or acceleration of pre-existing) kidney disease, decreased cardiac function, and abnormal heart rhythms.

Hyperparathyroidism is a well-documented cause of high calcium in cats.  The parathyroids are small glands located near the thyroid gland in the neck.  These glands secrete hormones that regulate the serum calcium level, the main one being parathyroid hormone (PTH).   Some cats, as they age, may develop a benign tumor involving one of the parathyroid glands.  This tumor will secrete excessive amounts of PTH, causing the calcium to rise, often to dangerous levels.    A few cases can be diagnosed by carefully feeling the neck and identifying a small nodule where the parathyroid glands reside.  In most instances, a diagnosis is achieved by measuring the level of PTH in the serum.  An elevated level confirms the diagnosis, although some cats with hyperparathyroidism will have normal PTH levels, confounding the diagnosis.

Neoplasia (cancer) is another common cause of high calcium. “After renal failure, cancer is probably the second most common cause of elevated calcium in the cats we see” notes Dr. Stone.  While any cancer can theoretically cause elevated calcium levels, the most common types are lymphosarcoma, squamous cell carcinoma, multiple myeloma, and mammary carcinoma.  In most cases, diagnosing the cancer is relatively straightforward, however, the diagnosis can sometimes be elusive, especially in the case of lymphosarcoma.    Calcium levels are high in some cases of cancer because the malignant cells are secreting a protein that is very similar to PTH, the hormone that regulates serum calcium levels.   In fact, this protein is called parathyroid hormone-related protein, abbreviated PTH-rp.   In normal animals, PTH-rp  levels are not detectable.  In cats, PTH-rp is not a very sensitive marker for cancer; some cats with cancer-associated hypercalcemia may have undetectable blood levels of PTH-rp. However, the PTH-rp test is very specific, meaning that if the levels of PTH-rp are elevated, a diagnosis of cancer is certain.

Osteolytic diseases – disorders in which bone is being destroyed – is an uncommon cause of high calcium in cats.  Occasionally, tumors will invade or spread to the bones, or an infection will occur in a bone that causes enough bony destruction that the calcium will become elevated.  Again, this is quite rare.  X-rays will often reveal the bony destruction.

Vitamin D toxicosis is another uncommon cause of high calcium levels in cats, and could occur theoretically if a cat was deliberately oversupplemented with vitamin D.  A few years ago, a new type of rat and mouse poison was introduced on the market.  This new rodenticide had calcitriol as its active ingredient.  Calcitriol is the active form of vitamin D, and it killed rats and mice by elevating their calcium levels.  Cats that ate it, or ate rodents poisoned by it, would develop hypercalcemia.  Fortunately, these products are no longer widely available, at least in the U.S.    A more common cause of vitamin D toxicity is ingestion of calcipotriene, a substance very similar to calcitriol that is found in a topical preparation used to treat psoriasis in people.  To date, this has only been reported in dogs.  Cats, apparently, are smart enough to not eat this ointment.

A common cause of high calcium, and one that should not be overlooked, is a spurious lab result, i.e. an error in measurement by the laboratory.   Diagnostic laboratory capabilities have gotten much more sophisticated over the years, and the quality control in these labs has improved markedly.  No laboratory is 100% perfect, however, and mistakes do occur.  I once ran routine senior bloodwork on a 13 year-old Somali named Rudy, and the calcium came back at 19 mg/dl, a shockingly high number.  With Rudy showing no clinical signs of illness at all, I had the laboratory re-run the test on a new specimen.  The new calcium result was 10.8 mg/dl, which was totally normal.

In some cases, after an extensive diagnostic workup, no cause for the hypercalcemia is ever revealed.  Since the early 1990’s, cases of unexplained hypercalcemia have become increasingly more apparent, and has been termed idiopathic hypercalcemia (IHC).  “Idiopathic” means that there is no known cause.  IHC is turning out to be one of the most common causes of hypercalcemia in cats.

As stated earlier, treatment of hypercalcemia is based on the cause.   For example, hyperparathyroidism is treated by surgically removing the overactive parathyroid gland; cancer is treated with surgery, radiation, or chemotherapy; Addison’s disease is treated by administering the deficient hormone(s).   If the cause cannot be determined, as in IHC, then a variety of interventions can be attempted.

Elevated calcium levels can sometimes be restored to normal by changing the cat’s diet.  High fiber diets, diets designed for cats with renal failure, and diets designed to prevent calcium oxalate bladder stones have all been shown, in various studies, to normalize the calcium level in some hypercalcemic cats.  If, after feeding a new diet, the calcium level remains elevated, treatment with glucocorticoids should be considered.  Most cats with IHC respond favorably to glucocorticoid administration.  Ideally, the dose should be tapered to the lowest dose that controls the hypercalcemia, to minimize any adverse effects (such as diabetes). As an alternative to glucocorticoids, cats can be given biphosphonates, a class of drugs designed to prevent the loss of bone mass.  Biphosphonates are often given to women to treat or prevent osteoporosis. They are very effective at lowering the level of calcium in the blood.

Determining the cause of hypercalcemia can be a challenge.  A careful evaluation of the history, physical exam findings, and various laboratory tests often leads toward a logical path to a diagnosis.  The best chance of successfully treating hypercalcemia in cats is to eliminate the underlying cause.

Sidebar 2
How Catnip’s medical editor remembers the causes of hypercalcemia in cats
In veterinary school, we are asked to memorize thousands of fact and figures.  It would be impossible to do this without mnemonic devices, those cute little learning aids that help us remember important facts.  There are several mnemonic devices for the causes of hypercalcemia in animals. Since Catnip is a family publication, I’ll share a non-racy one:  GOSH DARN!
G = granulomatous diseases
O = osteolytic disorders
S = spurious laboratory result
H = hyperparathyroidism
D = vitamin D toxicosis
A = Addison’s disease
R = chronic renal failure
N = neoplasia (cancer)

As I go through my list, if none of the letters explain the cause of the cat’s high calcium, then the cat likely has idiopathic hypercalcemia - the calcium is high for no discernable reason.
Labels: bladder stones calcium cats Health Hypercalcemia kidney parathyroid hormone urine