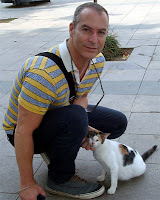 Monday was our last full day in Istanbul.  Today, the plan is to take a cruise up the Bosphorus.  Anyone who’s read Orhan Pamuk’s book, “Istanbul” knows the importance the Bosphorus Strait plays in the lives of the people of Istanbul.  The 19 mile-long Bosphorus serves as Istanbul’s main highway, hosting a never-ending stream of vessels, from little fishing boats to humungous oil tankers to luxury cruise ships.  It’s one of the busiest waterways in the world.  It’s the only outlet to the Mediterranean for Russia, and the only route to any sea for other countries on the Black Sea, like Romania, Bulgaria, Ukraine, and Georgia.  The Bosphorus separates two continents – Europe and Asia.  It connects the Black Sea in the north with the Sea of Marmara and (eventually) the Mediterranean in the south.  The Turks view the Bosphorus as much more than just a body of water.  It’s a sacred inheritance.  The locals are very content to just sit for hours on a bench that overlooks the Bosphorus and watch the boats go by.  I crossed the Bosphorus when I headed  over to Uskudar.  A 13 minute ferry ride, however, is no way to experience the strait.  Today, we have a 90 minute cruise up the 19-mile waterway, and I’m excited.

The public ferry, which leaves from the Old Town side of the Golden Horn, departs every day at 10:35 a.m.  To ensure a good seat on the left (European side) of the boat, we got to the ferry dock early.  Maybe a little too early.  So, with a bit of time to kill, we crossed over to the Spice Market area and grabbed a pastry and some tea.  The vendors outside the spice market were just setting up their stands.  I noticed in a planter nearby, a cute young cat poking about.  This cat had a red collar on, which I suppose indicated that she was being looked after by someone. 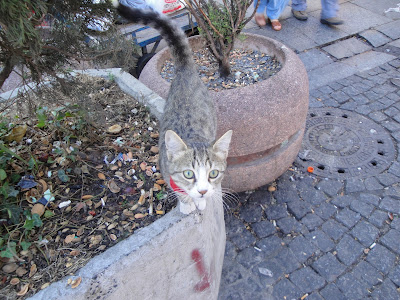 About a minute after  I took this photo, a vendor from one of the stands nearby  came over and gave the cat a small fish.  A woman came over soon after and admired the kitty, so much so that she picked it up and had her husband take a photo of her with his cell phone camera. 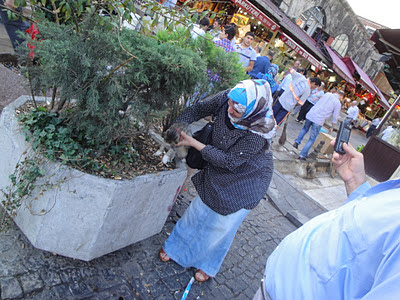 We headed back to the ferry dock, purchased our tickets, and then lined up to board the ferry.  We made a mad dash to the upper deck of the boat and secured ourselves a great seat  and watched the attractions as they floated by.

The water was deep blue, the sky was clear, the weather was warm.  It was perfect. 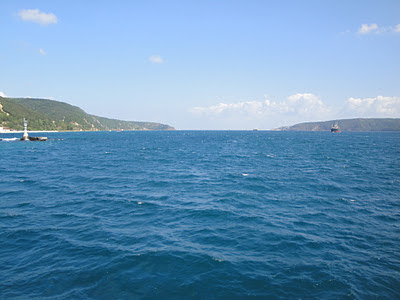 Our little section of the ferry contained eight seats.  Mark and I sat across from each other on the railing.  We met, sitting next to us, a couple from Canada, Bill and Jane.  Next to Jane were a couple from Los Angeles, and across from them were a Vietnamese couple from Houston, Texas.  During the course of the trip, we all did a little chatting, and ended up getting along very well.  Jane was impressed with my Rick Steve’s guidebook, which described in detail the various buildings and sites along both shores.  She and I teamed up to identify them all as we sailed past them, so we could point them out to Bill and Mark, who would then take the photos.

As the ferry pulled away, we saw Hagia Sophia, Topkapi Palace, the Blue Mosque, the Istanbul Modern Arts Museum, Dolmabahce Palace, Ciragan Palace, the Ortakoy Mosque, Kuleli, the Cape of Kandilli, and the Egyptian Consulate, to name a few. Describing all of the important mosques, forts and other structures would fill another ten blog posts.  Needless to say, there were many, and it was both entertaining and educational.

We arrived at our destination, Anadolu Kavagi, a small fishing village on the Asian side.  From Byzantine times to the present, this has been a strategic checkpoint for vessels going through the Bosphorus.   In this little village, the ferry takes a break and docks for about three hours. 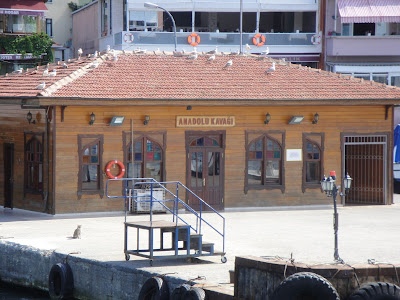 (Note the little kitty sitting by the dock.  I hadn’t actually noticed this until I inserted the photo into the blog.)

There are two main activities you can do in town: eat lunch, or hike up to Yoros Castle.  For cruises that stop in town for just two hours, you can either do one or the other.  For cruises that stop for three hours, you can probably do both.  So that’s what we did.  Bill and Jane asked if they could come along with us, and we were happy to have the company.  We decided to hike to the castle first, and eat afterward.  Yoros Castle is a little run down and it hardly reflects the glory of its past, but it does afford fine views over the Bosphorus and to the Black Sea.  The hike to the castle is a strenuous 20 minute climb.  Before starting, we stopped for refreshments, to take with us on the climb up.  Outside the little grocery, I spotted a kitty sleeping snugly in a planter. 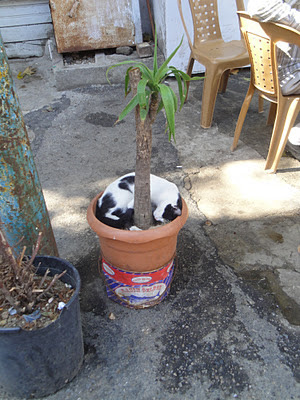 As we climbed, we encountered a sign that signaled a shortcut up to the top.  We took this path, which very cleverly diverted you through a few restaurants.  Although we had the castle as our ultimate destination, it was tough to avoid giving into temptation and stopping for lunch, given the spectacular views at this height: 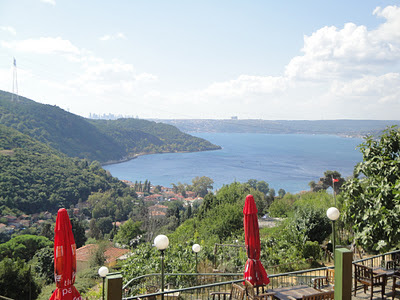 We finally reached Yoros Castle, at the top of the hill.  You can’t go into the castle, but it makes for a pretty nice photo 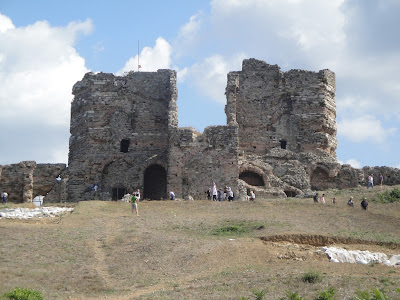 And the views are pretty amazing.  Check out this lovely view of the Black Sea 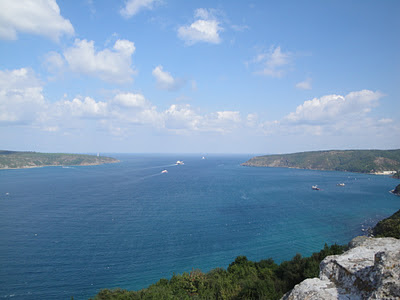 The walk down was certainly much easier.  We arrived back near the ferry port,  where there were a million restaurants catering to cruise passengers, both international tourists and Istanbul residents who come up here for a nice meal on weekends.  Mark, Bill, Jane and I found a cute place a block or two from the ferry dock and ordered a nice meal.  My meal arrived, and I suddenly felt like I was being watched.  I was. 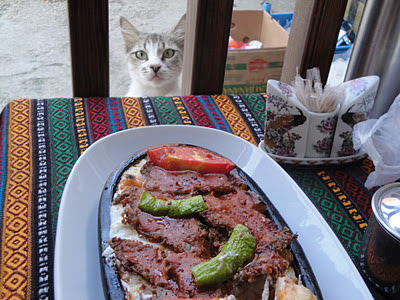 We headed back to the dock, where people were lining up to get on the boat.  The plan was to sit on the left side of the boat again, so that this time, we’d have a nice view of the Asian side on the way back.  We snagged a nice spot on the upper deck.  We didn’t see the two other couples while we were in the fishing village, or on the ferry dock going back, but we decided to save seats for them for the ride back.  They had no idea we were doing this, were pleasantly surprised to discover that we had arranged for the eight of us to all ride back together.  Steve, from Houston, is Vietnamese, and so is his wife, Kim.  When Kim found out that Mark was also Vietnamese, she sidled up to him and started chatting, and before you knew it, they were yakking away like brother and sister. 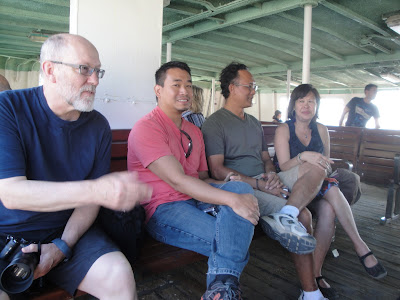 We arrived back in the Old Town, where we all exchanged e-mail addresses so that we could keep in touch and share photos of the cruise with one another.  (That’s Bill, Mark, Steve, and Kim on the ferry.)

With this being our last full night Istanbul, we wanted to spend it by doing something really authentically Turkish.  We considered going to a hammam (Turkish bath), but we decided instead to spend the evening doing what many locals do: smoke a water pipe, drink tea, and play backgammon.

The  water pipe, called a nargile (nahr-ghee-leh) (but also known as a “hookah” or “super-enormous bong”) is a Turkish tradition. Even non-smokers enjoy these things.  Smoking a nargile is not about the smoke; it’s about the relaxing social ritual.   The water pipes you see in Istanbul aren’t for smoking pot.  Instead, they use low-nicotine tobacco leaves, mixed with things like dried fruit or herbs.  This fruit-infused tobacco contains zero nicotine and give you no buzz at all, but the rich taste and aroma makes it a lot of fun.  We had noted, on the day that we went to the modern art museum (Istanbul Modern) that nearby was an entire row of nargile cafés, filled with young people watching football on TV while playing backgammon and smoking the water pipe.  So we decided to head back to that area and see if we could find a nice place to spend the evening.  The cafés were a bit of a distance from the hotel, but we decided to walk, as it would take us through parts of Istanbul that we hadn’t seen.

The neighborhood we walked through was in the New District, which most people don’t explore much, because most of the touristy sites are in the Old Town.  There were lots of cool shops and restaurants with outdoor seating.  Everyone seemed happy and relaxed.  The streets were lit nicely by the street lamps.  It was a nice atmosphere.  While walking, I did spot some cute cats.  Like this one sitting on this scooter: 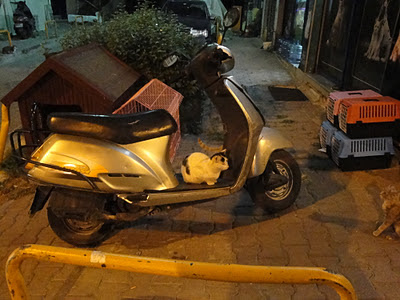 And this one sitting  on a cushion outside of a shop selling clothing and knick-knacks: 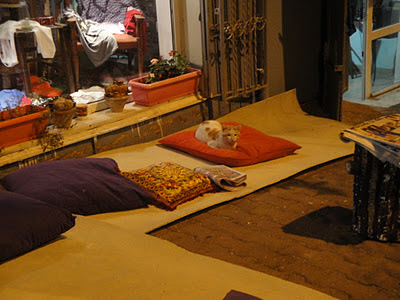 We finally got to the nargile cafés.  The proprietors see you looking at the cafés, and they try to wave you into their particular establishment.  We eventually found one at the end of the row that looked popular and fun.  We ordered up the pipe, asked for apple tobacco (the most popular flavor, I’m told), some tea, and a backgammon set.

A brief  word about  tea.  Tea is more common amongst Turks than coffee.  It is grown locally along the Black Sea coastline.  The Turks drink it out of these  little weird shaped glasses.  The glasses don’t hold much tea, but that doesn’t seem to matter to them.  They take tiny sips and make the tea last a long time; it’s more of a social ritual than anything else.  So we added tea to our evening’s festivities.  And finally, backgammon.

Backgammon has been around for thousands of years. The game is originally Persian, and Turks still refer to it by its Persian name, tavla.  Everyone in Turkey seems to know how to play.  Some of the social conventions are interesting.  A man can challenge anyone anywhere, but  it’s considered inappropriate for a solo woman to challenge a man in a traditional coffee shop where most or all of the clientele are male.  It’s okay for a woman to challenge men if she’s traveling with a group that includes men, or even on her own if she’s in a mixed-gender coffee shop in the modern part of the city, like where we were.

So here I am, with my tea, backgammon, and hubbly-bubbly. 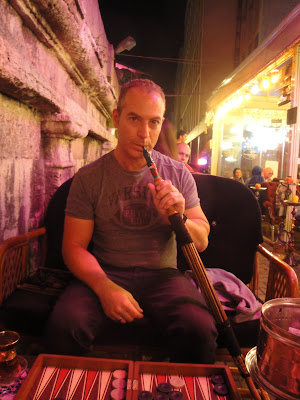 You can see that I was not alone; the place was packed.  I guess there was an important football game on, because most of the crowd was glued to the set. 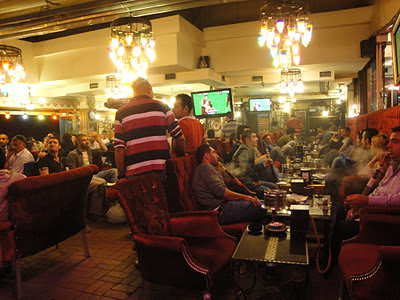 It wasn’t only human companionship that we had surrounding us that night.  A cute black and white kitty  strolled by our table in the corner.  Before you knew it…. 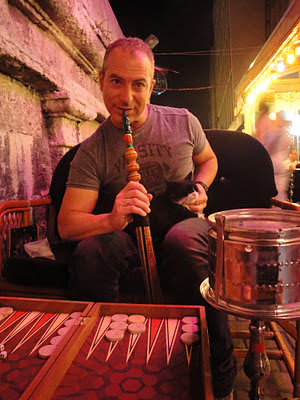 So, I’m in Istanbul, with my partner, drinking tea, playing  backgammon, smoking a water pipe, with a friendly cat on my lap.  Does life get any  better than this? 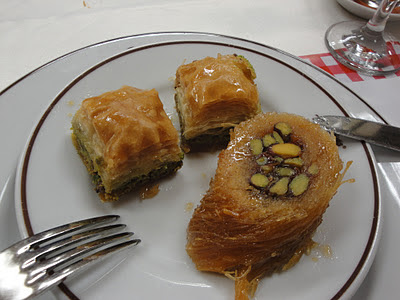