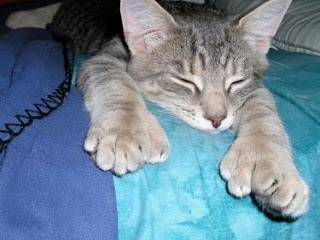 Are Polydactyl Cats a Separate Breed?

Dr. Arnold Plotnick is one of CatChannel's feline health experts. Check out more of his CatChannel answers.

Q: Can you tell me if six-toed cats are a rarity, or is there a breed?

A: Polydactyly (extra toes) is somewhat common in cats. My cat, Mittens, is a polydactyl cat. Her rear feet have one extra toe. Her front feet have the usual five, but her thumbs are gigantic. I confess that it was her freaky feet that attracted me to her in the first place.

Polydactyl cats are not a separate breed. Historically, however, the original unregistered Maine Coon cats had a high incidence of polydactylism — around 40 percent! It has been written that the extra toes evolved as a “snowshoe foot” to help Maine Coons walk in the snow, and local folk tales claimed that these cats used their big mitts to catch live fish right out of the streams, taking them home to feed their owners. These stories are charming, however, there is no evidence that polydactylism confers any natural selective advantage to affected cats. Breed standards required a normal foot configuration, and did not allow polydactyly in Maine Coons, and so the trait was deliberately bred out of this breed. In the Netherlands and Belgium, there is currently a move to restore the polydactyl form of the breed.

Although polydactylism is alluring, breeding cats deliberately for polydactylism is controversial. Some cat enthusiasts fear that unscrupulous breeders would try to produce cats with excessive and disabling numbers of toes on each paw. Fortunately, polydactyl genetics doesn’t work this way; you can only fit so many toes on a cat’s foot. Even so, a good compromise would be to write breed standards to define the maximum number of toes allowed, to discourage such attempts.