Strangest things ever Found Inside of a Cat

I have a funny story and memorable photos from a case I saw a while back. A cat named Hot Dog Stallard. My veterinary practice is located in Manhattan, where da Noo Yawk accent reigns supreme. When Jennifer Stallard brought her 16-pound orange bruiser of a cat into my office and introduced me to “Hot Dawg”, it was clear that Ms. Stallard had come to the Big Apple from a place firmly south of the Mason-Dixon line.

Hot Dog had come in for a routine physical examination. There were no health complaints. Hot Dog was eating, drinking, peeing, and pooping perfectly fine. His heart and lungs sounded okay, his lymph nodes were normal size, and his pulses were nice and strong. Everything was normal, until I felt his abdomen. My heart sunk. I felt a mass. A huge mass.

I broke the news to Ms. Stallard. I told her that we should perform abdominal ultrasound to further characterize the mass, and depending on the diagnosis, we would assess our treatment options. A mass this size is very likely to be cancer, I warned her, but we agreed to remain positive and not jump to conclusions until the ultrasound was completed.

The following day, ultrasound was performed. The ultrasound waves couldn’t penetrate the mass. It wasn’t a tumor. It was a foreign body in the stomach. I related the news to Ms. Stallard. I told her that this was a much better diagnosis than cancer. The next step would be surgery.

The next day, Hot Dog was prepped for surgery. I had my camera ready, as I suspected that this huge thing was going to be no ordinary foreign body. 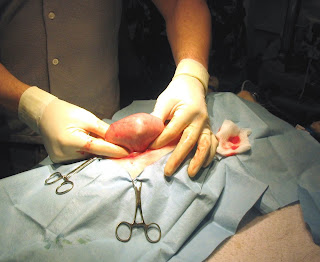 I made my abdominal incision and quickly located the stomach, and I could feel the large mass inside. I grabbed the scalpel and made my incision into the stomach. A big clump of brown material emerged. On first glance, it wasn’t possible to determine what it was, as you can see in the photo.


I pulled out the fetid mass. More material followed. And more. And more. I dropped the shapeless lump on a towel, and my technicians Rita and Hiromi eagerly picked it apart in the sink while rinsing off the adhered food particles. “Oh my gosh!” said Rita. “Dr. Plotnick, you have to see this!” echoed Hiromi.

We laid the contents out on a blue surgical towel. The majority of the mass consisted of elastic-type bands used to keep Ms. Stallard’s pony-tail off her neck. There were a lot of them. Twenty-eight, to be exact. There were also a few huge rubber bands, a few small pieces of plastic ribbon, and several chewed-up clumps of paper. 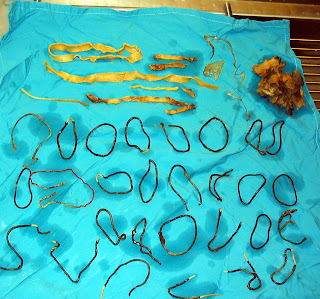 Hot Dog recovered uneventfully from his surgery, and Ms. Stallard came by the hospital that evening for a cage-side visit. I brought Ms. Stallard into the treatment room, to show her Hot Dog’s stomach contents, which were laid out on a blue surgical towel. She looked at the towel, and without skipping a beat, in her genteel Georgian accent said, “Hmm. Ah was kinda wonderin’ where all of mah hair bands went to.”

Hot Dog returned to our hospital several days later to have his stitches removed. His incision site looked great, and he was back to his old self. Ms. Stallard presented me with a lovely (non-surgical!) photo of Hot Dog. With a huge mouth like this, maybe it’s not so surprising how much stuff we found in his stomach! 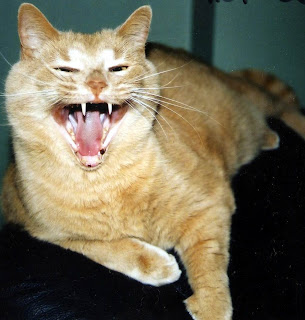