Reader Question: Why do Cats Bring their Toys to the Water Bowl? 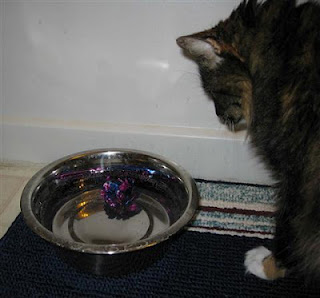 Ever wonder why cats bring (and sometimes drown!) their toys to the water bowl?  Here’s what my colleague Alice Moon-Fanelli has to say about this:

QUESTION: I have a four-year old tiger striped cat named Quincy.  He was adopted from our local Humane Society when he was just seven months old.  Since that time he has grown into a very beautiful and playful cat.  However, he has one very odd habit which I cannot seem to get an answer.  Quincy has a favorite toy which is a stuffed mouse.  He constantly drops this mouse which has stuffing inside into his water dish which saturates the mouse with water.  He will carry this saturated mouse around the house which we sometimes step on and will get an unpleasant wetness under our feet.  But, the worst of this habit is when he drops the mouse in his water dish and then proceeds to jump on the bed with the mouse in his mouth and drop it on or near me when I am sleeping.  Again, my sheets and I are getting saturated with the water from this mouse.  The other morning he hid the saturated mouse inside my pillow case and woke me up trying to bite at my pillow trying to get the toy out.  I then awoke to half my pillows soaking wet because of his saturated mouse he had placed inside.  These rituals that he performs are always in the early morning hours.  Can you tell me why he has to keep saturating his toy mice and why they must be brought to me in my bed? 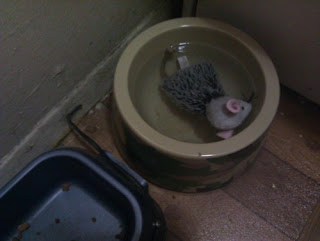 
Quincy’s toy dunking behavior is not unusual, but no tried and true explanations for this behavior exist.  Speculations run the proverbial gamut from the mundane to fanciful notions.  If Quincy’s toy or play area is located near his food and water dishes, a rousing game of predator/prey could logistically result in a mouse in the water.  Quincy may enjoy floating the mouse in his water bowl and then “fishing” for it – this adds a whole new dimension to the hunting game. “Fishing” behavior is quite typical for cat play behavior.  Perhaps the more appealing wet or soft texture explains why Quincy prefers to carry a saturated mouse toy.  It is interesting that he sometimes chooses to deposit his mouse inside your pillow case.  Some speculate that cats try to find a “safe” place for their favorite things.   In the wild, cats often take their prey back to their "nest" area, and hide it from predators. Indoor cats don't really have a "nest" per se, so they may consider their food and water dishes and in Quincy’s case your pillow as the "safest" areas within their "territory". Cats are crepuscular, meaning they are most active at dawn and dusk so Quincy’s “hunting” hours are quite normal, even if his activities may be disruptive for you. 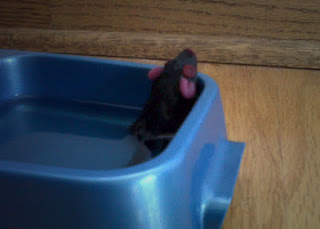 Predatory behavior is mostly innate but kittens fine tune their skills by trial and error and by observing their mother or other female cats who first bring home dead prey and eat it in front of the kittens.  Later the mother will bring a nearly dead creature to the kittens for them to finish it off. It is very common among some household cats, especially females, to bring home dead prey and drop it right in front of their owners. This behavior may exhibit her need to teach others, even if they are not her kittens, how to eat prey.  It has been suggested that the human recipient serves as a deputy kitten of sorts!  A more neutral explanation is that the domestic satiated cat finds itself in conflict with food it does not intend to eat but brings it back to the “nest” as part of its conflict behavior.  It is interesting to see how our domestic cats retain their natural behaviors and adapt them to their indoor environment so they still have a healthy outlet.  Have patience with Quincy and his quirks – they’re all natural! 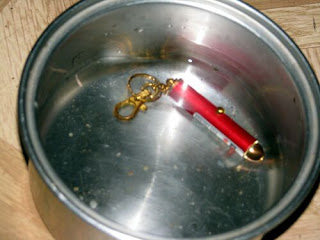