Bee Sting on a Cat's Paw

The other day, I took a glance at our afternoon appointment schedule, and I saw that a cat was coming in for a “bee sting”. This is not a common presenting complaint at our hospital, so I was intrigued, but skeptical. When the cat came in, however, the story the owner related sounded pretty plausible.


The owner noticed a bee in the apartment, and he tried to shoo it out, but to no avail. Finally, he managed to swat it with a magazine, and the bee fell to the ground. Apparently, it wasn’t dead, though, and his curious cat ran over to check it out before he could get rid of it. The cat didn’t show any sign that she had gotten stung, though. He dispatched the kitty and disposed of the bee, and that appeared to be the end of it. However, the next day, her foot was markedly swollen. This is what made him bring her in.

I checked out the cat. Yes, indeed, her foot was pretty swollen. We had our hospital iPad handy, so we took these striking photos. 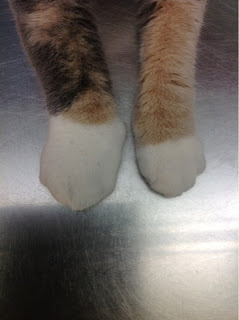 The foot wasn’t painful at all. She was able to walk on it just fine. On the top of the forearm, the skin was a little firmer than the rest of the leg, like a small “knot”. I suspect that this was the spot where she was stung. Everything did fit with a bee sting.

All I had to do was give an injection of Benadryl. Fortunately, at the time she was stung, she did not have any reaction at all. Some cats, like people, can exhibit anaphylaxis as a result of a bee sting, and it can be potentially life-threatening. This kitty, however, will be fine. Pretty neat case.