About 10 months ago, I received a phone call from a cat owner seeking a second opinion.  Their 4 year old male orange tabby, Teddy, has always been a bit of a troublemaker, knocking things off counters, chasing imaginary mice, and leaving no houseplant un-nibbled.  Over the last few weeks, however, Teddy had been battling a stubborn upper respiratory infection (URI), and it was only getting worse, despite treatment.  I asked about his treatments, and they read me a list of about eight antibiotics that had been tried, all to no avail.  “We sometimes see a little improvement, but the sneezing and nasal discharge never goes away. Now his eye has become very runny.”  I asked if the cat had been tested  for the feline leukemia virus, or the feline immunodeficiency virus, as both of these viruses can suppress the immune system, making it difficult for some cats to defeat an infection.  “He was tested twice”, I was told.  “Negative both times.”  I asked if the cat was ever treated with antiviral medication, instead of antibiotics.  “Yes.  We gave him famciclovir for two weeks.”  I asked if there was any improvement.  “None whatsoever”, his owner told me.  Clearly, this was not a typical URI.  I recommended that they bring Teddy in for me to see him in person.  We scheduled an  appointment for that Friday.

I admit I was not prepared for the shocking site of poor Teddy’s face.    Copious thick, tenacious yellow mucus was covering Teddy’s nose and pouring from his nostrils.  The bridge of his nose was swollen, and the huge amount of discharge from his left eye had pasted down all the fur around his eye, sealing the lids shut.  To say that this was no ordinary URI was the understatement of the year.  “I don’t think this is a viral upper respiratory infection”, I told Teddy’s owners.  “I suspect Teddy has a fungal disease called cryptococcosis”.


Cryptococcosis is the most common systemic fungal disease of domestic cats worldwide. It is caused by a fungus belonging to the genus Cryptococcous.

Cryptococcus affects many animals, such as horses, goats, sheep, cattle, ferrets, dolphins, dogs, and cats. Cats are five to six times more likely to be affected by the disease than dogs, and three times more than horses.  The organism is present worldwide, although it is most commonly found in Australia, western Canada, and the western United States.  People can also be infected with Cryptococcus, however, infection in cats is not considered to be a public health hazard, as there is no proven spread between animals and people.

Cryptococcus infection is acquired from a contaminated environment. The main environment where the Cryptococcus organism thrives is pigeon feces. In pigeon lofts, where pigeon feces can accumulate for years and be protected from sunlight and drying, the organism can remain viable for years.  The worldwide distribution of the organism is probably due to the fact that pigeons are the primary carrier.  They carry the organism on their beaks, feathers, and legs.

Exactly how cats become infected isn’t fully known, but inhalation of Cryptococcus spores is believed to be the primary means, with the nasal cavity being the initial site of infection. Once the respiratory system is infected, the organism can spread throughout the body via the bloodstream.   The most common sites that are affected by cryptococcal infection in cats are the nasal cavity, skin, lymph nodes, brain, meninges (the membranes covering the brain), and the eyes. Skin lesions are often present in cats with cryptocccus, often consisting of solitary or multiple nodules on the bridge of the nose, which may or may not be ulcerated.  Occasionally, the lungs will also be involved, reflecting the presence of cryptococcal pneumonia.  Because the nasal cavity is the most common site of infection, the majority of affected cats will show signs like sneezing, noisy breathing, nasal discharge (usually thick and yellow, and occasionally bloody), and nasal deformity. Sometimes, a small polyp-like mass can be seen in one or both nostrils of affected cats. Cryptococcus infection in the nose can spread to the back of the nasal cavity, toward the bones that separate the nasal cavity from the brain, leading to meningitis (which can manifest as behavior changes or seizures), and along the optic nerve, affecting the eyes (which can manifest as acute blindness.)

I admitted Teddy to our hospital and, after mildly sedating him, went about gently cleaning all the discharge from his nose and face, and especially around his left eye.  Fortunately, underneath all that pasted-down fur, his eye was fine. After removing the thick yellow discharge from his nose, a small pink mass was visible in his left nostril, like that described above. 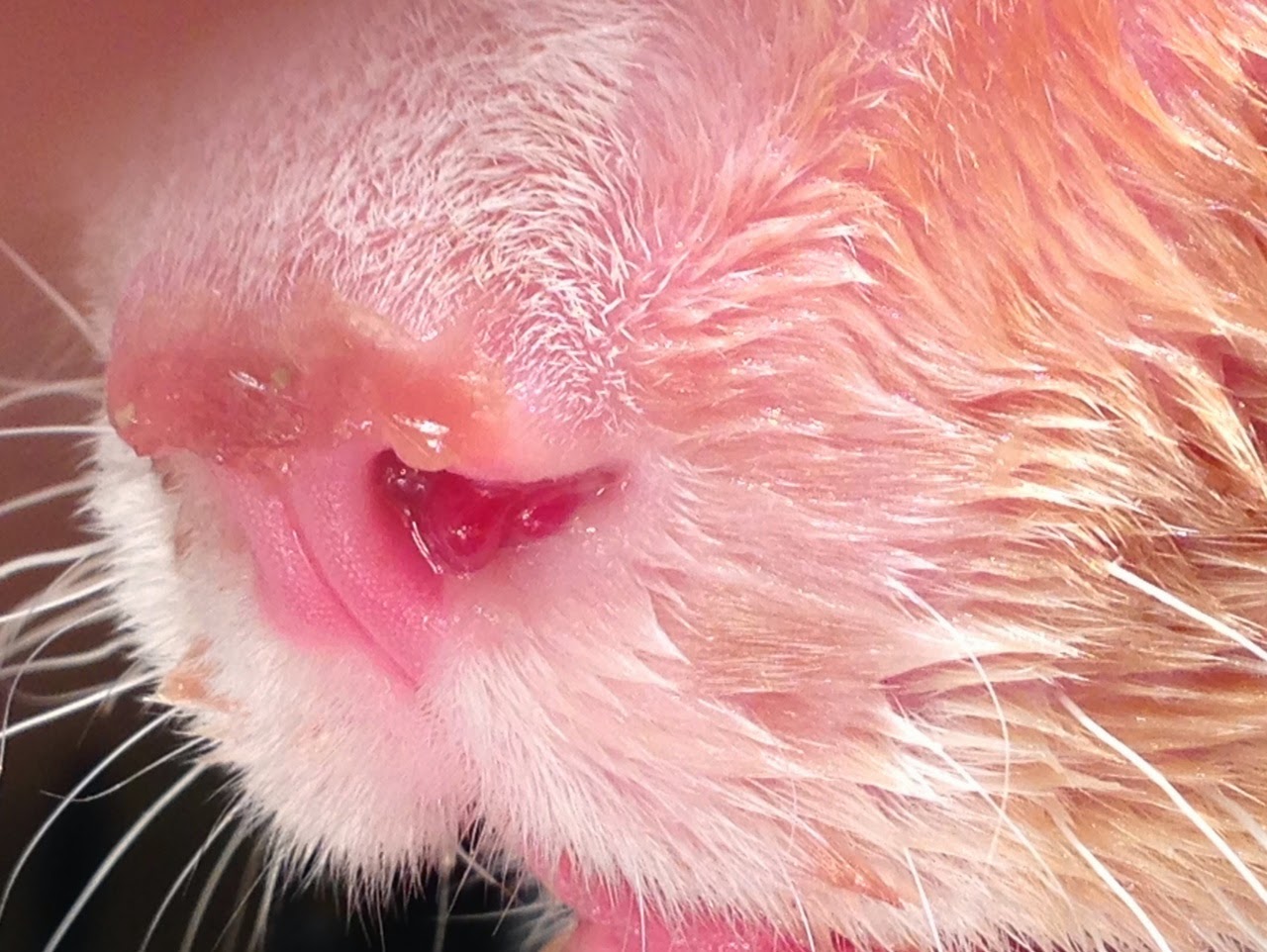 Diagnosis is usually made by running a test called the latex agglutination test.  This is a blood test in which the serum is evaluated for the presence of antigens that are part of the capsule that surrounds each Cryptococcus organism.  The levels are often very elevated in infected cats, although even low levels are considered diagnostic. The test is very accurate and false positives are rare.  Because the test is fast, reliable, and minimally invasive, it is the diagnostic test of choice.  Not surprisingly, Teddy’s test came back extremely high.  Another common diagnostic test is cytology. A sample of the nasal discharge, or material aspirated from a skin nodule, is applied to a slide and is stained and evaluated under a microscope by a cytologist.  The organism has a characteristic appearance under the microscope, and identification of the organism confirms the diagnosis.  Not finding the organism, however, doesn’t mean that the cat isn’t infected. If no organism is seen via cytology, a portion of the sample can be used for culture.  The Cryptococcus organism can be isolated easily on standard culture media.  In Teddy’s case, culture wasn’t necessary.  I made several slides from a sample of Teddy’s nasal discharge and sent them to our laboratory for analysis.  The cytology report confirmed the presence of numerous Cryptococcus organisms.  Another diagnostic test would be histopathology.  This differs from cytology in that instead of obtaining a sample of discharge (from the nose, or from a draining nodule), a biopsy specimen (for example, a small piece of tissue from a skin nodule) is submitted to the laboratory and a pathologist evaluates it under the microscope.  In most cases, a large number of organisms will be identified on the microscope slide, confirming the diagnosis.

Cryptococcus is a fungus, and treatment requires the use of antifungal medications.  One very effective class of antifungal drugs is the azoles, which includes fluconazole, ketoconazole, and itraconazole.  Fluconazole is probably the drug of choice for cats with primarily nasal Cryptococcus, given that the drug also penetrates well into the brain and eye, and is no longer prohibitively costly now that generic formulations are available.  Occasionally, some strains of Cryptococcus are resistant to fluconazole, necessitating a switch to either itraconazole or ketoconazole.  Ketoconazole is inexpensive, but side effects are a little more likely than itraconazole.  Itraconazole occasionally causes decreased appetite, vomiting, and may cause liver damage.  Fluconazole is the least likely of the three to cause adverse effects.

Cats with definite involvement of the central nervous system or with disease that is spread throughout many sites in the body are best treated with the more potent drug, amphotericin B.  This drug has a narrow margin of safety and can sometimes cause kidney toxicity. Although protocols have been developed to allow administration of this drug subcutaneously (under the skin) in a large volume of fluid several times a week (allowing for the cat to be treated as an outpatient), it is best given intravenously while the cat is hospitalized and closely monitored.   Cats that require amphotericin B are usually given an azole, or the drug flucytosine, concurrently, to insure good penetration into the central nervous system and the eye.   Flucytosine is an effective antifungal when used in combination with other drugs; it should never be used as the sole drug for treatment, as this can lead to development of resistance.

The prognosis for cats with Cryptococcus infection is relatively good.  In one study from Australia, 60% of cats were cured after one course of therapy, although one-third of cats that had a good response to treatment subsequently relapsed.  Cats with involvement of the central nervous system tend to have a worse prognosis.  With supportive care, however, even cats with severe mental depression or seizures may subsequently recover.  Fortunately, Teddy did not have CNS involvement.  Teddy was started on a course of antifungal therapy with fluconazole.  After three weeks, Teddy was markedly improved.  After two months, he looked like his normal self.  His antigen level had dropped significantly during those two months, but was still positive.  Treatment was continued for an additional two months, after which time, his antigen level was zero.   Although Teddy and his owners have moved across the country, I e-mailed them to find out how he was faring.  He’s looking good, eating and drinking well, and stirring up trouble in his new home, a sure sign that he is completely back to normal.
Labels: cats Cryptococcosis fungal Health