Just another Manic Monday (a.k.a. Whatever happened to a plain ol’ feline physical exam and vaccines?) 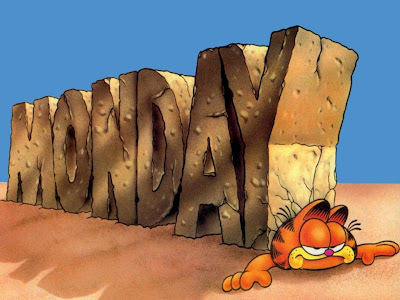 After 23 years of being a vet, I finally have a nice work schedule.  I work Monday, Tuesday, Thursday, Friday, and every other Saturday (for four hours).  I’m off Wednesday and Sunday.  It’s perfect.  I think of Monday and Tuesday as my “mini-week” and Wednesday as my “mini weekend”.  Then I work Thursday and Friday and (every other) half-Saturday, and get Saturday afternoon and Sunday off.  This schedule keeps me pretty sane.  No complaints.

This past weekend I had the entire weekend off. It’s a good thing, too, because Monday turned out to be totally crazy.  My practice has gotten really busy lately (no complaints about that, either.  With this economy, I consider myself very fortunate), and it’s all been pretty challenging stuff.  Here’s my actual day, with very little dramatic embellishment.  This is what comes through my office – and what goes through my brain – on a manic Monday.

First thing in the morning, right at 8:00, Beowulf’s owner dropped him off for his chemotherapy.  Beowulf is a middle aged cat who initially presented for frequent vomiting. We worked the case up pretty thoroughly, and ultrasound and endoscopy revealed high-grade lymphoma.  He’s been getting chemotherapy for a few months and has been doing great.  Last week, Beowulf was due for his adriamycin infusion, but he jerked his leg when we tried to put in his intravenous catheter, and the catheter did not go in perfectly.  We tried his other front leg, but there was too much scar tissue in that leg due to prior chemo injections.  Because the catheter did not go in absolutely perfectly last week, we aborted his treatment that week.  You see, the drug adriamycin is a very effective chemo drug, but if any of the drug leaks out of the vein into the surrounding subcutaneous  tissue, it causes a horrendous, horrifying skin reaction. Some animals can actually lose the leg from the reaction.  So, unless we’re 100% certain the catheter has gone in properly, we err on the cautious side.  Today, the catheter went in smoothly, and he received his medication.

My first appointment was to see a cat named Cheyenne, a 16 year old cat with multiple problems.  Her owner brought her in for straining to defecate and foul diarrhea.  On physical exam, the cat had lost weight, and I thought I felt something not-quite-right in the abdomen when I palpated.  I noticed that the cat was breathing hard during the exam, and as the physical exam progressed, the cat’s breathing became increasingly labored.  I stopped the exam and let the cat chill out on the exam table.  Labored breathing is not a good sign in any cat, especially an older cat. Common causes for labored breathing would be fluid in the lungs (i.e. pulmonary edema), or fluid trapped between the lungs and the chest wall (i.e. pleural effusion).  I percussed the chest, i.e. I tapped on both sides of the chest with my fingers, listening to the sound it made.  A hollow, resonant sound suggests that there’s air in the lungs.  A dull, flat sound suggests fluid.  Percussing is very “old school”, which is why I like it.  We tend to rely more and more on fancy equipment to make our diagnoses.  I think it’s still important to use our senses in the exam room.  In my opinion, that’s “real” medicine.  I don’t always need a chemistry panel to tell me a cat has kidney failure; I can smell the uremia on the cat’s breath.  And I don’t necessarily need an x-ray to tell me if there’s air or fluid in the lungs/chest.  I can percuss and listen.  Which I did.  I thought there was pleural effusion. I took an x-ray to quantify it. When a cat has labored breathing, you have to be very careful when taking an x-ray.  If the cat struggles or fights the x-ray, you have to let up; you cannot restrain the cat.  If the cat struggles and cannot meet the increased oxygen demand during the struggle, the cat can go into respiratory arrest.  Bearing this in mind, I took a dorso-ventral (DV) x-ray of the chest, rather than the more-informative ventro-dorsal (VD) view, because the DV view allows the cat to just sit there on the x-ray cassette while we snap the picture.  For the VD view, the cat is positioned on its back while we pull the front legs forward and the rear legs backward.  Cats aren’t too crazy about the process.  Trying to do this to Cheyenne would have been deadly.

The DV film confirmed a huge amount of fluid in the chest.  To give the cat some relief, we would have to “tap” the chest – remove the fluid using a syringe and needle – and then (ideally) send the fluid out for analysis to hopefully determine the reason why the fluid developed.  Given the cat’s age, the likely presence of a mass in the abdomen, the chest full of fluid (there are very few benign conditions that lead to fluid in the chest; most of the time, it’s something serious) and the owner’s financial limitations, she elected to euthanize the cat.  I thought this was a reasonable decision.  This cat clearly had something terrible going on, and even if we could do all of the diagnostics necessary, it would be very unlikely to lead to a diagnosis of anything treatable.  So we euthanized poor Cheyenne.

Sharkey’s owner then dropped off his cat for a three-day stay at our hospital, on IV fluids.  On Friday, I examined Sharkey.  Well, I tried to, at least.  Sharkey is a Russian Blue, and he is a little feisty. Very feisty.  Spawn-of- Satan feisty.  He was very difficult to examine.  We needed to wrap him in a towel, and put on a muzzle, and even then, he gave us quite a workout.  Sharkey had experienced a drop in his appetite and was a bit lethargic. (Ha! Yeah, right.)  Several months before, he was diagnosed with mild chronic renal failure.  (He’s an older cat.)  I suspected a worsening of his kidney disease.  We managed to get blood and urine on Friday morning, and by Friday afternoon my suspicions were confirmed.  Sharkey’s BUN and creatinine (two blood markers of kidney disease) were elevated, as well as his phosphorus (another marker), all to a degree that I felt warranted a brief hospital stay.  During his stay, we would put in an intravenous catheter, and then administer fluids at a pretty decent rate, with the intention of reducing the level of his kidney toxins.  Sharkey was building up the toxins quicker than we could get him to pee them out.  Our intention during his hospital stay would be to make him pee them out quicker than they were building up.  This would likely make him feel better.  Then we’d instruct the owner on how to give fluids subcutaneously (under the skin) at home every day, to maintain this new balance of him peeing them out quicker than they build up.   If, after a month of daily fluids, he was able to maintain a decent blood level of kidney toxins, we could maybe cut back his fluids to every other day, indefinitely.   Bringing Sharkey in over the weekend would be tricky, though, because of his temperament.  For us to place a catheter in him, we would need more than just our weekend staff.  Fortunately, Sharkey was doing fine at home, eating and drinking well; he wasn’t showing signs of illness despite the elevated toxin level.  So we scheduled him to drop off on Monday.  Getting the catheter in him today indeed turned out to be a bit of a fight, as we needed several people to help hold his towel-wrapped body (and muzzled snout) while we put in the catheter.  But we were successful, and we set him up in a quiet, comfortable cage.

Then Fig arrived.  Fig is a 4 year-old cat who was being transferred to us from Blue Pearl Veterinary Partners.  He was taken there the night before because he had apparently chewed on a lily plant.  Easter is coming up soon, and ‘tis the season for Easter lilies and lily toxicity.  Lilies are VERY toxic to cats.  All parts of the plant – leaves, stems, even the pollen.   Blue Pearl saw him the night before and started him on intravenous  fluids to try to prevent kidney damage.  It’s unknown exactly how much of the plant Fig ingested, if any.  In this circumstance, you play it safe and treat as if he was exposed.  The initial chemistry panel that they ran on him showed normal kidney numbers.  We admitted him, with the intentions of keeping him on fluids all day today, and all day Tuesday.  Tuesday night we would  draw blood for a chemistry panel, and send him home if things looked good.  (Update:  It looks like one of his kidney parameters, the creatinine, turned out to be a little elevated [3.2].  The BUN is normal.  So Fig might indeed have experienced a little hit to his kidneys.  After a two days of fluids, he did well, and we sent him home; a recheck of his kidneys showed the numbers to be normal. He’s fine. Whew!)

Next was Harley Davidson.  Harley is a middle aged cat with a history of urinary issues, mainly cystitis.  He’s been on a prescription diet designed to minimize any bouts of cystitis, and the number of episodes he’s had has been  greatly reduced as a result.  But he was apparently going in and out of the litterbox at home a tad more frequently than usual, so his owner dropped him off for us to evaluate him and perform a urinalysis and urine culture.   Well, Harley is similar to Sharkey, i.e. super-aggressive.  Sigh.  So…again with the towels and muzzle.  Fortunately, Harley had urine in his bladder and I was able to obtain enough for a urinalysis and culture.   Harley’s owner wasn’t going to pick him up until toward the end of the day, so we set him up in a boarding cage downstairs, rather than in the hospital ward.  We had a few sick ones in our hospital ward, and a cat like Harley who growls and hisses every time someone gets near his cage just gets the other cats all worked up, making them difficult to handle as well.  So Harley had the nice quiet comfortable boarding ward all to himself.

After that, I had a little break...

....which is also a good time to take a break from this blog post.

Manic Monday Part 2 will be posted in a few hours. Stay tuned.

In the meantime, make sure you add yourself to our quarterly e-newsletter.  We'll be sending out our Spring edition in a week.
Labels: A week in the life chemotherapy Chronic Kidney Disease kidney lungs patients toxins Veterinarian Veterinary Medicine