Renomegaly (enlarged kidneys) is a fairly common finding in cats.  This article discusses the common causes and potential treatments.

I’m not the only veterinarian who has noticed that odd veterinary cases tend to come in twos and threes.   I can go months or even years without seeing a particular ailment, and then I’ll get two in the same week, sometimes even in the same day. 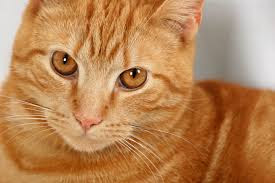 Last week I examined a 12 year-old cat for decreased appetite and weight loss.  From the cat’s scrawny appearance on the exam table, it was obvious that he had lost substantial weight.  On abdominal palpation, I immediately felt two markedly enlarged kidneys.   My very next appointment was a middle-aged cat for routine examination and vaccines.  The physical exam findings were normal, except when I felt the abdomen.  The right kidney was normal sized.  The left kidney, however, was at least three times the size of the right one.

Renomegaly (“reno” means “kidney”, “mega” means “increased size”) is the medical term for enlarged kidneys.  Renomegaly is not a diagnosis.  It is a physical exam finding.  Once identified, the judicious use of diagnostic tests such as x-rays, ultrasound, cytology, or biopsy often leads to a relatively quick diagnosis, because the list of disorders causing renomegaly in cats is fairly narrow. (see sidebar)  The characteristics of the kidney enlargement are helpful in formulating the list of possible causes. For example, renomegaly can be unilateral (one kidney affected) or bilateral (both kidneys affected).  It can be diffuse (the entire kidney is involved) or focal (only one part of the kidney is affected).  Renomegaly can also be described, based on the severity of the enlargement, as being mild, moderate, or severe. Renal lymphoma is the most common cancer affecting the kidneys.  Affected cats are typically middle aged or elderly.  The degree of enlargement is moderate to severe, and both kidneys are involved.  Cats with renal lymphoma often have poor appetite, weight loss, excessive thirst and urination, lethargy, and pale gums. These signs are usually due to renal failure as a result of the lymphoma.  Some of these signs, however, may also be due to concurrent lymphoma in other organs such as the gastrointestinal tract and central nervous system.  Approximately 50% of cats with renal lymphoma are also infected with the feline leukemia virus.

Feline infectious peritonitis (FIP) is an insidious viral disease that is nearly always fatal in cats.  Cats infected with FIP can develop either the “wet” form of the disease, in which the abdomen (and occasionally the chest cavity) fills with fluid, or the “dry” form, in which clusters of inflammatory cells, called granulomas, infiltrate various organs of the body.  The kidneys are a common target for these granulomas, and many cats with the dry form of FIP will have palpably enlarged, irregular kidneys.   There is no treatment for FIP, although an investigational drug called Polyprenyl Immunostimulant may show some promise in treating the dry form of the disease.  Further studies on this drug are needed.

Sometimes, a cat will suffer some type of damage to one of the kidneys, resulting in a gradual loss of function in that kidney.  The loss of functional kidney tissue in the affected kidney continues over time, and the kidney gets smaller and smaller, as scar tissue forms in the kidney.  The cells of the opposite kidney become enlarged as the opposite kidney now has to do the work of both kidneys.  This enlargement is called compensatory hypertrophy and tends to be relatively mild.

Polycystic kidney disease (PKD) is an inherited disorder in Persian cats and Persian crosses.  In cats with PKD, normal renal tissue is displaced by multiple enlarging cysts.   In most affected cats, clinical signs don’t develop until kidney failure develops, at which point the cat may show anorexia, increased thirst and urination, weight loss, and vomiting.  A more detailed discussion of polycystic kidney disease can be found in next month’s issue of Catnip (or whatever issue you decide to publish the article I’m scheduled to write).

Primary renal cancer is uncommon in companion animals, accounting for less than 2.5% of all tumors in dogs and less than 1.7% of all tumors in cats.  As noted above, lymphoma is the most common renal cancer in cats.  It tends to affect both kidneys.  Other cancers affecting the kidney in cats include renal carcinoma, renal adenoma, and nephroblastoma.  These rare tumors are almost always unilateral.

Renal abscesses and hematomas are uncommon causes of renomegaly in cats.  An abscess is a pocket of pus that develops within the kidney, either due to a blood borne infection, or via extension from an infected focus in a nearby organ.  Other causes include blunt abdominal trauma, penetrating wounds, or surgical contamination.  A hematoma is a solid swelling composed of clotted blood.  They usually occur secondary to trauma.

Urine that is formed in the kidneys travels down the ureters into the bladder, and then out the urethra. If the flow of urine is obstructed, the urine builds up, causing dilation that begins in the central portion (the medulla) of the kidney.  The kidney tissue surrounding the medulla gets compressed from the pressure, until the kidney becomes a non-functional, fluid-filled sac, unless the obstruction is relieved.  Unilateral hydronephrosis results from obstruction involving a single ureter or kidney.  Common causes include a ureteral stone, a ureteral stricture, or accidentally tying off the ureter during spay surgery.  Cats that develop a stone in one ureter occasionally develop stones in the other ureter as well, which can lead to bilateral hydronephrosis.  The most common cause of unilateral hydronephrosis in cats is “idiopathic”, a nice way of saying that we have no idea why it happens.  Obstruction further down, at the level of the bladder or urethra, would be expected to cause bilateral hydronephrosis, however, even though urethral obstruction is very common in male cats, this obstruction is usually diagnosed quickly enough to precede any significant renomegaly. 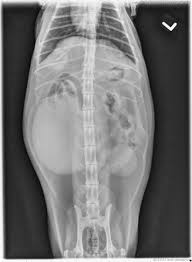 [The kidney is surrounded by a tough fibrous capsule.  Occasionally, fluid can accumulate beneath the kidney capsule.  This will cause the kidney to feel enlarged on palpation.  Although these disorders technically are not causing enlargement of the kidney itself, they usually cannot be differentiated from true renomegaly based on abdominal palpation alone, or by x-rays.  Only by abdominal ultrasound can it be shown that the enlargement is due to the presence of fluid beneath the capsule of the kidney.  The most common sub-capsular disorders are sub-capsular hematomas and perinephric (perry-NEF-rick) pseudocysts.  Sub-capsular hematomas usually occur after blunt abdominal trauma or as a complication of kidney biopsy.  Perinephric pseudocysts  (“peri” = surrounding; “nephric” = pertaining to the kidney; “pseudo” = false) are accumulations of fluid just beneath the fibrous capsule that surrounds the kidneys.  They are called pseudocysts because they look like cysts, but unlike true cysts, they lack an epithelial lining.  One or both kidneys may be affected. Exactly why they develop is unknown.  About 75% of cats with perinephric pseudocysts also have some degree of chronic renal failure.]

As stated above, the list of causes of renomegaly is fairly narrow.  The age and breed of the cat is helpful in narrowing the list even further.  For example, young cats are more likely to have congenital problems or FIP.  Cancer is more common in older animals.  A high index of suspicion for PKD should be present if the patient is a Persian cat.

Physical exam findings also help narrow the list further.  Severe enlargement  is most likely caused by hydronephrosis, cancer, PKD, perinephric pseudocysts, or FIP.  If the kidneys feel irregular in shape, FIP, lymphoma, and other cancers are higher on the differential list.  Smooth kidneys are usually present in acute renal failure, hydronephrosis and compensatory hypertrophy.  If the cat shows pain when the kidneys are palpated, acute renal failure, kidney infection, and kidney abscess move up higher on the differential list.

Many of the illnesses that result in renomegaly will cause abnormalities on routine blood and urine tests. Occasionally, these tests alone will reveal the diagnosis.  In most cases, however, laboratory tests alone are inadequate for achieving a diagnosis for renomegaly.   X-rays give information about the size, shape and location of the kidneys, however, plain x-rays may not provide adequate detail.  A technique called excretory urography, in which a contrast agent is given intravenously, can enhance the appearance of the kidneys on the x-rays, giving more details regarding the cause of the renomegaly.   Ultrasound provides a rapid, non-invasive assessment of the kidneys, allowing evaluation of the internal structures of the kidneys.  Both techniques (x-rays and ultrasound) have their specific benefits and limitations.

In many cases, a definitive diagnosis for renomegaly requires obtaining a sample of the affected kidney tissue.  This is usually done either by a technique called fine-needle aspiration (FNA) or by biopsy.  Fine-needle aspiration is a procedure in which a needle, attached to a syringe, is inserted into kidney, using ultrasound guidance.  Suction is applied to the syringe so that cells from kidney are aspirated or sucked into the hub of the needle.  The contents are then sprayed onto a microscope slide and are sent to the laboratory for interpretation.  The advantage of this procedure is that it fairly non-invasive and inexpensive.  A disadvantage is that the aspirate may not yield enough cells to make a diagnosis.  If the aspirate doesn’t yield a diagnosis, a biopsy specimen needs to be obtained.  This can be done either through exploratory surgery, or less invasively through a variety of methods, such as laparoscopy (a procedure in which a fiber-optic device is inserted through a small hole in the abdominal wall, allowing a direct view of the abdominal organs), or through the use of a special biopsy needle, under ultrasound guidance, that allows for a small sample of kidney tissue to be obtained.  Once a diagnosis is obtained, a more specific treatment regimen can be devised.  Prognosis depends on the diagnosis.

Renomegaly is not an unusual finding in cats.   A variety of conditions can lead to renomegaly, such as infiltration of the kidneys by inflammatory cells or cancer cells, structural abnormalities, hereditary conditions, and obstructive disorders.  Because the list of disorders causing renomegaly is narrow, veterinarians can often quickly arrive at a diagnosis, and treatment can be instituted.

Sidebar: causes of renomegaly in cats