It all started in a 5000-watt radio station in Fresno, California…

Actually, it all started exactly ten years ago.  On January 2, 2003, Manhattan Cat Specialists opened its doors to the public.

It’s truly hard to believe that a decade has passed. Our story, in a nutshell:

I had just finished a 3-year stint working for The ASPCA, and I was ready to branch out on my own.  A colleague of mine from my Baltimore days, Anne Sinclair, had recently opened her own cat hospital, Cat Sense, in Bel Air, Maryland, and although she said it was very hard work, there was nothing more rewarding than being your own boss and controlling your own fate.  She graciously loaned me a copy of her business plan, and using that as a template, I prepared a business plan for my own feline-exclusive veterinary hospital in Manhattan.  At the time, there were only two cat hospitals in NYC – one on the upper east side, and one downtown in the Flatiron district.  There were no cat hospitals on the upper west side.  Yet.

After having my business plan reviewed by an adviser at the Small Business Association, I presented it to three banks.  One bank balked.  The other two said okay.  JPMorganChase offered the better terms, and so, with a quarter-million dollars in seed money, construction began.  At the time, businesses in Manhattan were still reeling from the aftermath of September 11th.  Many businesses were still closed, and many others decided to pack up and move out of the city.  It pained me to see my hometown, my glorious city, struggling to get back on its feet.  The time was ripe for starting a new business, and contributing, in my own small way, to helping bring the city back to the thriving metropolis that it has always been.   Armed with my loan money, I strolled the streets and avenues of the upper west side, looking for appropriately-sized vacant storefronts to serve as my potential cat hospital.   Lo and behold, I spotted the perfect site, just off of West 76th and Broadway. 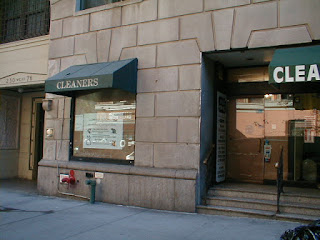 The inside was a mess. 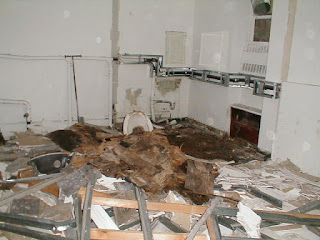 But the realtor promised me that once the lease was signed, they would deliver to me a big “vanilla box”, for me to design and construct as I saw fit.  I signed the lease, construction began, equipment was purchased, signage was applied, and…. voila! 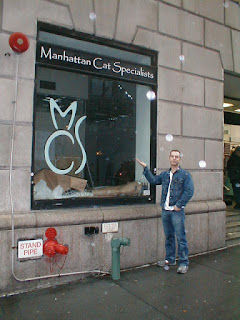 Manhattan Cat Specialists came into being.

My initial staff was small:  Sharon and Hiromi were my technicians, Joshua was my receptionist, and Ethel was our hospital cat and mascot.

Six months after we opened, Sharon and her husband had to relocate to Maryland, and I hired Rita to take Sharon’s place.  Here’s our first official staff photo.

I must be doing something right, because ten years later, Hiromi and Rita are still working for me.  (Wow…my hair was so much darker… and more plentiful… and so few wrinkles.  Sigh.  I guess I can believe it’s been ten years.)

Of course, a lot has happened since January 2003.  We’ve gone from one receptionist to four (Jackie, Jeaneth, Lois and Deniz) and from two veterinary technicians to five (Hiromi, Rita, Gina, Liliane, and Gill).  We’ve also gone from one doctor to two (Dr. Victoria Sheheri).  And we added a director of operations to handle our marketing, computers, and generally keep the place running smoothly (Brad).  We’ve gone from being open 5 ½ days a week to 7 days a week.  We started a cat/kitten adoption program, and in ten years have adopted out over 300 kitties.   We added a veterinary house call service on Thursdays.

And so, our second decade begins today.  I’m proud of what I’ve built these last ten years, and am grateful for my supportive staff who have helped me turn this dream into a reality.  I’m also grateful for the clients who have put their faith in me and my staff, trusting us to care for their cats.   Here’s to another decade of keeping cats happy and healthy.